It seems fast and stable when it’s at speed.

See the first video footage of the Tesla Model S Plaid as it tackles the Nurburgring. Claims are that this hot Model S can easily beat the Porsche Taycan.

Seen here is the prototype version of the car that Elon Musk just announced for production starting in October/November 2020. The production Tesla Model S Plaid is expected to be even faster than this early prototype though.

Earlier today, we reported on rumors of this Model S Plaid already setting Nurburgring lap times that are quicker than the Porsche Taycan, though nothing is official just yet. We expect some formal announcement within the next few days.

With seating for seven, there’s no doubt the Model S Plaid will be a record-setter. Just think of the possibilities here. Fastest 7-seat _. Fill in the blank as you please.

Next year will surely be exciting times for drag race fans, as this new Model S Plaid will certainly have no equal on the track. We look forward to total domination. Don’t you?

These are a couple of Model S prototypes R&D testing the upcoming “Plaid” drivetrain and also beating the Porsche Taycan Nurburgring lap time by around 20 seconds in the process.

Model S P100D Raven, around 10.4-10.5 in the quarter mile. Plaid may get into the 9-second range. If that happens, I think most tracks will require a roll cage. I seem to recall the NHRA required that of the Dodge Demon because it zipped by in under 10 seconds. 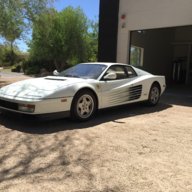 Love it. I used to be a big Porsche guy, but dislike their lines ups with the exception of the GT3. Hate how they nickle dime you on their options (look up $580 option for an MP3 sound of real engine noises on the Taycan as an example). Embarrassing for a 2020 sports brand to be beat so handily by an essentially 2012 design.
Reactions: 67King and MichaelP90DL
P 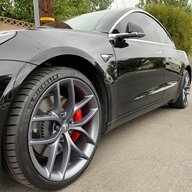 Most drag strips require a parachute under 10 seconds if the car can hit 150 MPH. Window nets are also required under 10 seconds. Not sure how if they would enforce this on a stock car but after one run under 10 seconds your day would be over if you didn't have that.
A

And in classic Tesla style, the "plaid" car breaks down and gets passed by a Taycan... ‍