Tesla’s fourth-quarter earnings report beat expectations with $7.38 billion in revenue and a message that the company expects to be cash flow positive going forward.

“We expect positive quarterly free cash flow going forward, with possible temporary exceptions, particularly around the launch and ramp of new products,” Tesla said in its Q4 update. “We continue to believe our business has grown to the point of being self-funding.”

“We achieved strong cash generation through persistent cost control across the business,” the company said in its Q4 update. “Our pace of execution has also improved significantly, as we have incorporated many learnings from our experience launching Model 3 in the United States. As a result, we were able to start Model 3 production in Gigafactory Shanghai in less than 10 months from breaking ground and have already begun the production ramp for Model Y in Fremont.”

Model Y was the other good news. The production ramp for the company’s highly-anticipated SUV started in January 2020, ahead of schedule. Tesla also announced that the Model Y’s EPA range has been increased to 315 miles from 280 miles.

“None of this would be possible without strong demand for our products,” the update said. “For most of 2019, nearly all orders came from new buyers that did not hold a prior reservation, demonstrating significant reach beyond those who showed early interest.” In Q4, the annualized total vehicle production rate in Fremont was just over 415,000 units. Tesla said it expects to “comfortably exceed 500,000 units” in 2020.

Also nice to see S/X deliveries and production increased sequentially in Q3 and Q4. Reports that nobody wants them now that the 3 is in good supply were apparently premature.
G

Magellan55 said:
Also nice to see S/X deliveries and production increased sequentially in Q3 and Q4. Reports that nobody wants them now that the 3 is in good supply were apparently premature.
Click to expand...

S/X deliveries were down 29% year over year. I guess people can put a positive spin on anything.
Reactions: CrayZ1
M

yes we can They were down 50% Y-Y in the first half of the year as Model 3 ate into their sales, but are recovering now. I doubt they will ever go back up to where they were, but it's nice to see them reverse course. Model Y might eat into them some more (especially the X). At least in the US, they are each still handily outselling the eTron and i-Pace combined.

Cool. Have they made enough profit now to offer at least bottom-tier customer service support?
Reactions: glide
I

Ostrichsak said:
Cool. Have they made enough profit now to offer at least bottom-tier customer service support?
Click to expand...

I don't think so yet. They really need a profitable 2020Q1 and the Model Y volume.

There's been some mention of internal systems upgrades. They have made some tweaks to improve particular things, but anything big would need more stability.
S

Ostrichsak said:
Cool. Have they made enough profit now to offer at least bottom-tier customer service support?
Click to expand...

They did double their mobile support to 750 vehicles or so. 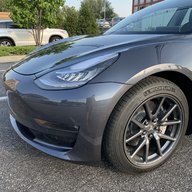 The question for me is do I sell my shares now and rebuy when it hits $200 again or hold know that the Model Y and Semi sales will bring a better balance sheet?

I think they are missing an opportunity to build a ford transit style delivery van.
M

My guess is Q1 will be rough, not as bad as last year but still below expectations, and the stock will get hammered just long enough to buy some more of it cheap. Probably won't go below $350 or so though unless there's really bad news like AP kills some nuns or they get investigated for cooking the books.