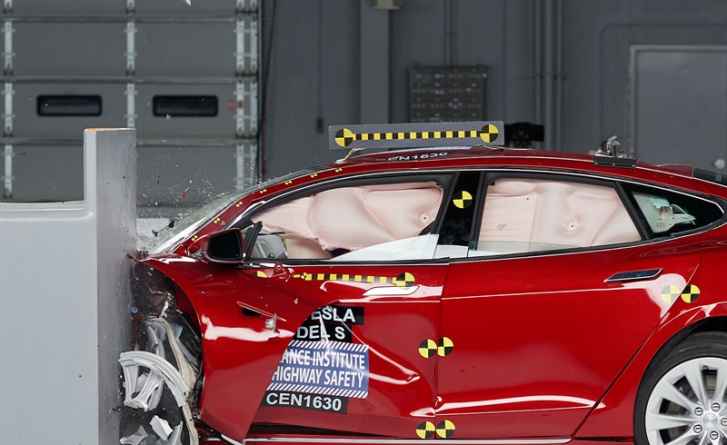 Tesla says changes currently on the production line will earn the Model S a top rating from the Insurance Institute for Highway Safety after falling short of that designation following crash tests.

The ratings for the Model S apply to 2016 and 2017 cars built after October 2016. Tesla says it made a production change on Jan. 23 to address a head-contact problem found in the evaluation, and IIHS will test the updated vehicle for small overlap protection as soon as it can be delivered.

To qualify for Top Safety Pick, a vehicle must earn good ratings in all five crashworthiness evaluations – small overlap front, moderate overlap front, side, roof strength and head restraints – and have an available front crash prevention system that earns an advanced or superior rating. The “plus” is awarded to vehicles that meet all those criteria and also come with good or acceptable headlights.

The IIHS evaluation of the Model S included the following observations:

Tesla quickly issued a statement on the rating:

“We are committed to making the world’s safest cars, and Model S has previously received a 5-star safety rating from the National Highway Traffic Safety Administration and a 5-star rating from Euro NCAP. Model S still has the lowest ever probability of injury of any car ever tested by NHTSA.

We proactively develop updates and aggressively implement changes onto the production line in record time any time there is a substantial benefit to customer safety. One of the improvements recently introduced in January 2017 specifically addresses the “Acceptable” (or second highest) rating that the Model S achieved in the small overlap frontal crash test, and we expect new tests to yield the highest possible rating (“Good” rating) in the crashworthiness category.

Additionally, IIHS tested a vehicle that was in transition with new Autopilot hardware, but without the new software that enables Automatic Emergency Braking. In the coming weeks, Automatic Emergency Braking will be deployed via a free over-the-air software update, and IIHS will be testing a new vehicle. We expect to receive the highest possible rating in every category, making Model S eligible for the IIHS Top Safety Pick award.”

A video of the Tesla’s moderate overlap crash test is below.

Tesla now repairing MCU1 with a new Tegra card for... So a couple weeks ago my facelift 2016 Model S greeted me one morning with a black MCU screen. The car still started and ran, but no HVAC controls or... Post by: michaelrap, Today at 3:12 PM in forum: Model S

Coronavirus Right_Said_FredI’m becoming more and more convinced this thread has outlived its usefulness. Several prolific posters, who seem to believe they know i... Post by: dfwatt, Today at 6:35 AM in forum: TSLA Investor Discussions

Model s Noise when stopping Do you guys have any similar experience like this? 6-7 second in the video, it makes noise when the car is complete stops. It is worse at uphill stops ... Post by: qhrjsdl, Today at 6:09 PM in forum: Model S

Need Three More JdeMO Orders--Can We Count on You? Hi Everyone, Many of you have been monitoring the couple threads on the JdeMO DC fast charging for the Roadster made by QC Charge. We have been trying ... Post by: IslandRoadster, Today at 10:09 PM in forum: Roadster 2008-2012