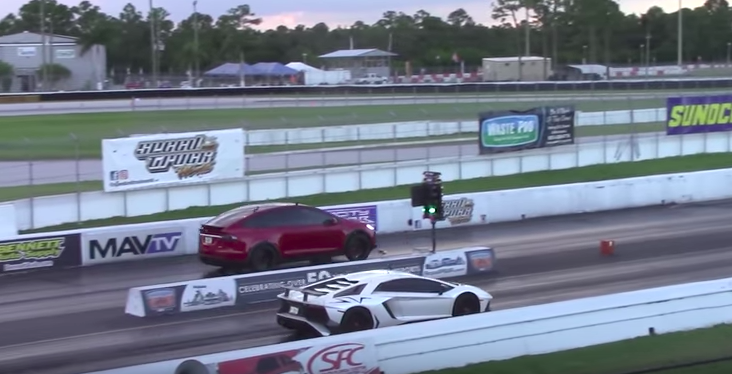 Why Tesla is Quicker Than a Lamborghini

This post is from Niruhan Viswarupan, an Engineering Intern at WSO2 Inc. You can read more of his posts on Medium.

Recently I stumbled upon a video on YouTube which shows a quarter mile drag race between a Tesla Model X and a Lamborghini Aventador. I was extremely surprised to see the Model X beating the Lambo. It is hard to digest that people are even having these kind of drag races between a SUV, which is primarily intended for a family use and a super high end sports car let alone the SUV actually winning. Watch the following video from 2:10 to 2:40 to see it for yourself.

Tesla Model S P100D with Ludicrous Update takes a mere 2.5 seconds to accelerate from 0–60 mph (0–97kmh); this is even quicker than a Bugatti Chiron or McLaren P1. According to this Wikipedia list, the only commercial car on the planet that is quicker than Tesla Model S is a Porsche 918 Spyder, a tiny two-seater, which costs about $1 million and is no longer in production. All this makes us wonder just how the hell Tesla engineers got the 7-seat family sedan to be so incredibly quick. And, I mean Tesla is quicker, not faster. Tesla accelerates quicker than any other comparable car but is limited to 155 mph.

Let’s dive into some details.

1. Primary reason is that an electric motor can generate maximum torque (the rotational force that is transmitted from the motor to turn the wheels. Torque measures an engine’s ability to handle loads and accelerate) at pretty much any RPM. This means that right from the moment the motor starts to rotate, a near-maximum torque is given to the wheels. The following curve shows the general torque vs. rpm characteristic of a 3-phase AC induction motor, the class of electric motors which Tesla uses.

Compare this to the following curve which shows the same characteristic for an IC engine.

One can see that an IC engine generates peak torque only over a very limited range of RPM. This is why IC engine cars generally start with lower gears and rapidly shift up as the speed increases. The motivation for gears is to keep the engine RPM in the optimal range.

2. Since electric motors can generate near-maximum torque at any RPM they don’t need gear-shifting. So the engine is driving the wheels right from the moment you step on it and there is no gap in the torque transfer from motor to the wheels. When it comes to IC engines there are gaps in this torque transfer when the driver engages the clutch to shift gears. Even when the car has auto-gear and the electronic systems are calibrated for that perfect shift, there are milliseconds of gaps in-between.

4. Transfering electrons from battery to motor and generating torque is much faster than getting fuel from tank to IC engine. Tesla has designed its batteries to have much better power transfer. Incredible amounts of electricity can flow in and out of the battery enabling it to deliver high power to the power-hungry motors.

“An (IC) engine is a sort of a breathing animal: It has to take air in and squeeze it,” Duoba told Live Science. “Those processes are not instantaneous.” (In a gas-powered engine, a piston compresses a mixture of air and fuel, causing combustion, which turns the motor.)

Electric motors, meanwhile, don’t have all those tiny moving parts.

The electronics in an electric motor are almost instantaneous,” Duoba said. “There’s no delay in power, no waiting for throttles to close. All those little effects add up.”

5. Like with torque electric motors can generate decent amount of power across all RPMs. Power, or horsepower when it comes to automobiles, defines the rate of energy transfer in the engine. In fact horsepower is related to torque by the following equation:

The two motors of the Tesla Model S P100D can generate 762 hp between them. However correlating horsepower ratings of IC engine cars and electric cars is a challenge. There is a power rating for the battery as well as the motors. Sometimes when the battery charge is low or if the temperature is low, the battery is unable to deliver the amount of power required by the motors and thus reducing the performance.

6. The advanced software control systems present in Tesla is tuned and continuously improved via over-the-air updates to get maximum performance out of existing hardware. The characteristics of an electric motor is extremely simple compared to an IC. Also the gear-shifting introduces anomalies into the characteristics. Hence it is easy and efficient to control the parameters of an electric vehicle with software and optimize it for maximum performance. To quote a Tesla owner from the forums:

When I bought my 85D it was rated over 5 seconds (to get from 0–60mph). Software upgrade took it to 4.4s. More recent software upgrade apparently takes it to 4.2s. I’m amazed. What more do you want?

To quote one of the testers,

…because if we look at the amount of time it takes the Tesla to accelerate from 0 to 60 and the amount of time it takes to stop, from 60 to 0, they’re identical, they’re within a 20th of a second of each other. So it is actually scrambling for traction, the entire way to 60 miles an hour, and is for the very first time in the history of automobile, a car that accelerates as hard from 0 to 60 as it can stop from 60

It claims that the current acceleration of the car is limited by the amount of friction it can gain off the road.

So, there you have it! Reasons why Tesla outperforms even sports cars specifically designed and engineered for power and speed. Even while the electric vehicles were demonstrating their capabilities against traditional cars I was skeptical. After some serious internet research I’m totally sold on electric cars and that their advantages outweigh their cons!

Niruhan Viswarupan is an Engineering Intern at WSO2 Inc., an open source enterprise middleware platform for enterprises. You can read more of his posts on Medium.

Musk Says Tesla in Discussions to Bring Sales to India

Early retirement strategies Speaking as someone who did this at 50 (now 63) with roughly the same net worth as I started with, you need a plan that includes a question I have not... Post by: kkillebrew, Today at 10:20 AM in forum: TSLA Investor Discussions

2014 Model S HID to LED Replacement Hi everyone, I am trying to find a bring alternative for the HID bulbs on my Model S. Found one in Amazon and according to a review, a user did instal ... Post by: sivakarthik06, Today at 6:01 PM in forum: Model S

Front camera haziness Hello, My MX front camera picture or video recording at the bottom side is hazy . Tesla mobile technician had to replaced front camera and still same ... Post by: DingDong, Today at 6:22 PM in forum: Model X