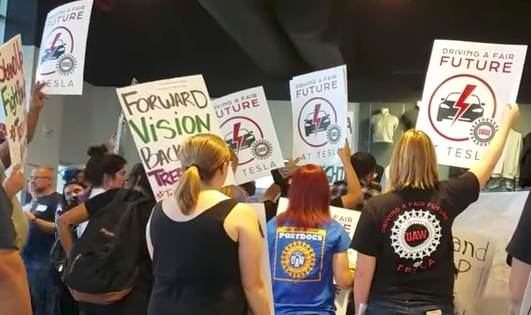 A rally was staged Tuesday at Tesla’s Fremont, Calf. factory to encourage the automaker to reinstate some of the hundreds of workers who were recently fired.

The rally was organized by the International Union, United Automobile, Aerospace and Agricultural Implement Workers of America (UAW) and reportedly included dozens of workers and community members. In coordination with the protest, labor groups sent a letter to Tesla executives suggesting workers were recently terminated for supporting unionization and raising issues about pay and safety at the factory.

“Among the fired workers are people who have raised their voices with concerns about health and safety risks, fair pay and the right to organize free from intimidation, and we are concerned that these workers may have been unjustly fired for doing so,” the letter says. “We are calling for reinstatement of these workers and fair treatment for all employees.”

Tesla has attributed the recent firings to annual performance reviews. The company issued a statement on the protests saying it strives to be a fair and just company:

“No one at Tesla has ever or will ever have any action taken against them based on their feelings on unionization. Some employees recently left Tesla, but what has not been reported is that a much larger number – 17% of our employees – were promoted, and almost half of those promotions were within our factory in Fremont. We are a company where people can be promoted as quickly as their talents and work allow. It is not unexpected that union supporters would protest any decision we make, including this one, and we respect their right to do so.”

UAW has been leading efforts to unionize Tesla’s Fremont factory for more than a year. The group also filed an official complaint with the National Labor Relations Board alleging workers were harassed for distributing union materials. Tesla has called those claims “baseless.”

A video of the protest posted to YouTube is below.

Report: Tesla’s Plan for a Chinese Factory in Trouble

Coronavirus Wow, this is a great interview. The researcher is from California, and the interviewer is a New Zealand reporter. The reporter asks intelligent questi... Post by: Cosmacelf, Yesterday at 8:30 PM in forum: TSLA Investor Discussions

Coronavirus bkp_dukeI swear this feels like "let me google that for you" (I literally did a search on this thread with chloroquine and my username): Cor... Post by: Papafox, Today at 1:53 PM in forum: TSLA Investor Discussions

Coronavirus troymI feel the quality of this thread is getting exponentially worse.Are you sure? I just went back and read the first 4 pages of the thread. It seem... Post by: Daniel in SD, Today at 10:12 AM in forum: TSLA Investor Discussions

Elon Musk's ventilator giveaway may do more harm t ... It's one thing to be optimistic about timeline deliveries, but when lives are on the line, being sloppy is inexcusable. When you over-promise ven ... Post by: afadeev, Today at 3:09 PM in forum: Model 3

Need 2018.36.2 Corona lockdown Blackscreen Hi I am im very delicate situation, borders locked, Croatia doesnt have Service Center. Not possible to deliver car to Austria, Austria out of stock w ... Post by: BIZTEam, Today at 10:46 AM in forum: Model S

Infotainment Upgrade for AP2.0 Cars Pushed Back Unfortunately AP2.0 cars with FSD capability has been pushed from "late March" to "late April" according to the Tesla website. Inf ... Post by: JoJoV111, Today at 4:52 PM in forum: Model X

Repainting a Roadster What do you think of purchasing a roadster and then repainting to a different color , does it devalue it ? Or is it better to keep the original color ... Post by: Lou B, Today at 5:11 PM in forum: Roadster 2008-2012