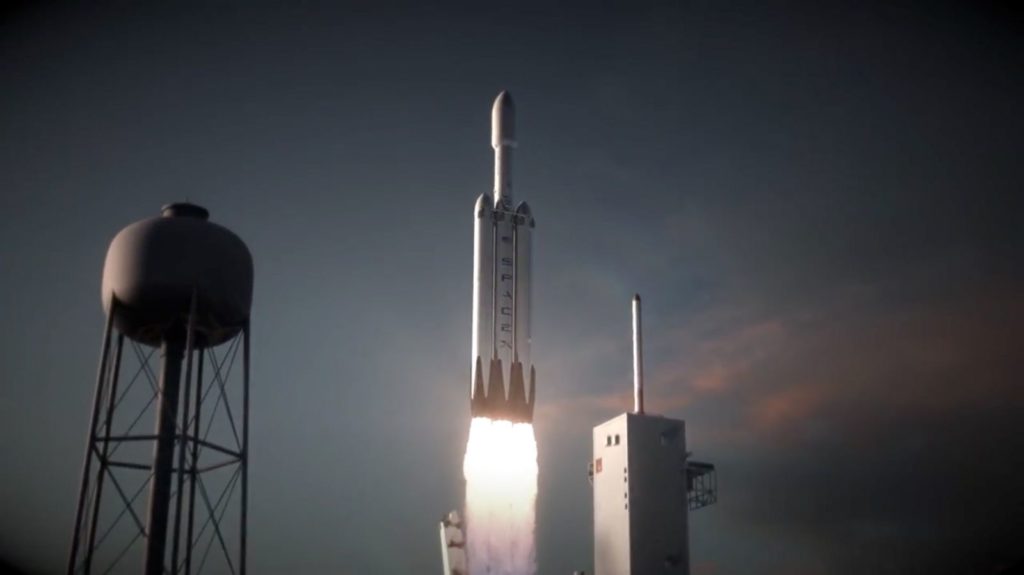 Update (Dec. 2, 3:41 p.m. PT): It’s now unclear if Musk plans to send his Roadster to Mars. A reporter from Ars Technica quotes Musk today saying the plan is real. The Verge quotes Musk saying he “totally made it up.”  This story will be updated when Musk or SpaceX provide clarity.

SpaceX’s Falcon Heavy will make its maiden voyage in January and CEO Elon Musk said the rocket will carry his personal Tesla Roadster into space.

Falcon Heavy is the vehicle SpaceX hopes to use for missions to the Moon and Mars. The rocket has around three-times the power of the company’s current Falcon 9 Rocket.

Falcon Heavy to launch next month from Apollo 11 pad at the Cape. Will have double thrust of next largest rocket. Guaranteed to be exciting, one way or another.

On Friday, Musk tweeted that Falcon Heavy’s “payload will be my midnight cherry Tesla Roadster playing Space Oddity,” referring to a song by David Bowie. “Destination is Mars orbit. Will be in deep space for a billion years or so if it doesn’t blow up on ascent.”

Payload will be my midnight cherry Tesla Roadster playing Space Oddity. Destination is Mars orbit. Will be in deep space for a billion years or so if it doesn’t blow up on ascent.

Falcon Heavy has suffered delays for years. When announced in 2011, it was expected to launch in “2013 or 2014.” Musk has also publicly discussed the difficulty of the project and the possibility that the rocket will explode.

Meanwhile, as Musk said in September, SpaceX is in the process of overhauling its fleet of space vehicles to focus on a new Interplanetary Transport System, codenamed the BFR (Big F-ing Rocket).

The company will start building the first BFR ship in 2018, and Musk “feels confident” they can launch the first human mission to Mars in about five years.

Coronavirus Daily numbers are in. Japan: Decent. Good trending on South Korea, but it's still way too soon to make too much of it. Lots of cult members left... Post by: KarenRei, Yesterday at 6:01 PM in forum: TSLA Investor Discussions

Papafox's Daily TSLA Trading Charts View attachment 514950 Over the weekend word came out that the coronavirus had made significant inroads to Italy and Iran. This news set the market to... Post by: Papafox, Yesterday at 11:09 PM in forum: TSLA Investor Discussions

Reduced Range - Tesla Issued a Service Bulletin fo... I'm sure replacing the battery would get a lot of these people to calm down. Post by: fr100, Yesterday at 5:42 PM in forum: Model 3

Alignment- Where and $ ? Suggestions Going to need an alignment soon as I swap on my next set of tires/wheels at ~47K miles. I'm thinking an alignment would be wise. Where have you g ... Post by: insaneoctane, Today at 9:32 AM in forum: Model 3

Yellow Screen border, poor quality & workmanship, ... I purchased a brand new Tesla model S in 2018 through one of my best experiences with car sales. No-haggle, accommodating salesperson, and an effortle ... Post by: Rborhani, Today at 9:44 AM in forum: Model S

2020 Roadster was removed Why is the new roadster removed from the Tesla website? Post by: Ian Spencer, Yesterday at 8:26 PM in forum: Roadster 2020+