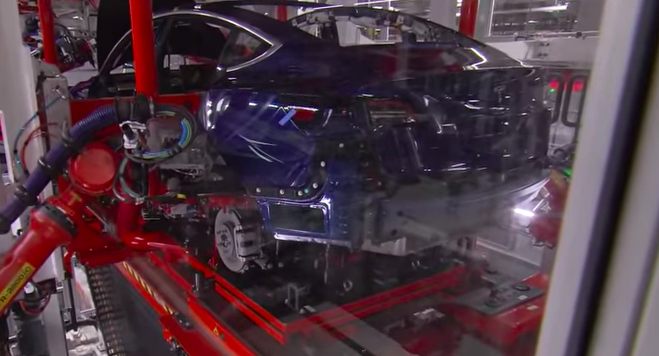 Musk Gives Model 3 Factory Tour; Says He Sees a ‘Path Out of Hell’

Tesla CEO Elon Musk says he now has a “clear understanding of the path out of hell.”

In an interview with CBS This Morning, Musk gave viewers a look at the Model 3 production line that he’s anxious to improve. Musk even showed the “narrow” couch and conference room floor he’s taken to sleeping on during busy times at the factory.

Musk said Model 3 production trouble escalated into something he did not anticipate.

“I need to figure out how to be better and then we can be better at meeting goals,” Musk said.

The company “got complacent” about “core technology,” Musk said without providing specifics about the technology. He also said Tesla put too much new technology into the Model 3 all at once. “Should have staged it,” he said.

Musk also conceded that his production line is too robotic. He would like to add more human workers.

The full segment is below.

Papafox's Daily TSLA Trading Charts PapafoxThe crazy times will be if we see an actual squeeze, presumably on or shortly after Dec. 21.Usually I don't have much to add to your excel... Post by: FrankSG, Today at 1:14 AM in forum: TSLA Investor Discussions

2020 Q4 'M' delivery club Picked mine up (Blue LR, black interior, aero wheels) from Thorpe Park this morning. Was supposed to pick up at 4pm but got a call saying I could pick... Post by: rozza, Yesterday at 5:56 AM in forum: The UK and Ireland

2020 Shipping Movements So there was this paparazzi sneaking about Mr Miserables secret hideout ... View attachment 611099 Post by: Mr. Impatient, Yesterday at 5:00 AM in forum: The UK and Ireland

2021 LR AWD Deliveries yet? We’ve seen quite a few SR+ deliveries already this quarter, but has anyone started getting their LR yet? Seems they are building SR first... Post by: Cycleman6, 32 minutes ago in forum: Model 3

Closing Model X Windows From App Trying to understand the remote window operation (or lack thereof). For Model X you can vent the windows from the native Tesla app, but not close them ... Post by: AMP-MX, Yesterday at 10:13 PM in forum: Model X