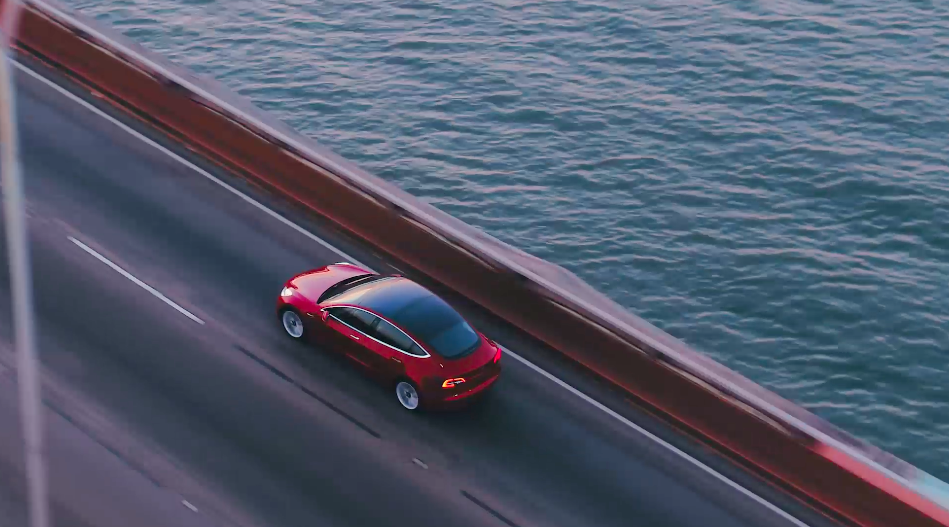 Elon Musk said the company’s Q1 letter to shareholders covered just about all he had to say about the company’s progress and instead wanted to devote the bulk of Tuesday’s earning’s call to questions.

At one point he teased those on the call that their questions were too dry, but ultimately covered quite a bit of ground with his answers. Below is a round up of a few notable comments.

Production – Musk said he’s most excited about “rapid increase of output.” He said Model 3 production has achieved a “peak hour” equivalent to a rate of 5,000 cars per week. Musk said “if you can achieve it even once,” a focus on refinement will help you eventually sustain the rate. Tesla has been able to achieve this by simplifying the production line and studying what tasks deserve automation and what tasks don’t.

Human hands are “way better at doing that,” he said, and the “flufferbot” was decommissioned.

Best-Seller – Despite production woes, Tesla is still on the cusp of becoming the best-selling mid-sized premium sedan in the U.S., Musk said. He expects Model 3 to have 30-40 percent share by the end of the year, stealing sales from cars like the BMW 3 Series.

Profitability – Musk is “confident” the company will be cash flow positive in Q3. To achieve the goal, Tesla will begin a restructure this month to shed expenses. Most of the reductions will impact third-party contractors. “We’ve got barnacles on barnacles,” Musk said.

Model Y – Investment in the Model Y program will only become significant in 2019. While a clear timeline for production hasn’t been given, Musk said the car won’t hit roads for at least two years. He said the production location has not been decided, but to expect an announcement by end of year.

Musk also made a bold prediction for the upcoming all-electric crossover, particularly given the stress the company’s newest model has caused the company. “I think Model Y is going to be a manufacturing revolution,” he said without offering more specifics.

Tesla Semi – Musk responded to those who challenge the truck’s specs announced at the unveiling by saying the Semi’s range will be even better. Tesla previously said its electric semi truck can travel up to 500 miles with a 80,000-lb load, but Musk was willing to bump the expected range to 600 miles.

Musk said sales are “opportunistic,” as many fleet operators are coming directly to Tesla with inquiries.

Self-Driving – Tesla’s self-driving efforts have had a rough go recently, including a federal investigation into a fatal crash that occurred while Autopilot was engaged, as well as team departures. Jim Keller, Tesla’s VP for Autopilot Hardware, left the company last week for an engineering position at Intel. Musk said there is no plan to replace Keller. The company’s efforts for full autonomy, including the development of its own chip designed specifically for artificial intelligence applications, will be managed by Pete Bannon and Andrej Karpathy, Tesla’s director of AI and Autopilot vision.

Speaking on the proposed Tesla Network autonomous ride-sharing platform, Musk said the company would be ready from a technical standpoint by the end of next year. However, the rollout of such a service will depend on regulatory approval. “We’re making really good progress on full autonomy,” he said.

Musk said Tesla will soon begin issuing a quarterly safety report on the use of the self-driving feature in cars. “Autopilot is safer, no question,” he said.

You can listen to the full webcast of the call here.

Refreshed “2021” Model 3 Performance Waiting Room You don't get a VIN in your account before you have a delivery date. They designed the system that way because they might switch if they match yo... Post by: Marius A, Friday at 1:00 PM in forum: Model 3: Ordering, Production, Delivery

Refreshed “2021” Model 3 Performance Waiting Room Here are the pictures for you : Quality was great , just taillight need slight Adjustment but nothing off align or major Paint defects ~ Ride was supe... Post by: t518, Yesterday at 4:56 PM in forum: Model 3: Ordering, Production, Delivery

Does It Seem Like Everyone Wants To Race You? TLLMRRJYeah? How’s that working out for ya?Like the rest of 2020. Post by: NpOverspeed, Yesterday at 12:50 PM in forum: Model 3

2021+ Window closing Sound difference Has anyone done a comparison of the front windows fully down and closing the doors yet? Curious if it’s more a solid sounding... Post by: Rippin1Gear, 11 minutes ago in forum: Model 3

WiFi turning off by itself When I upgraded from MCU1+HW2 to MCU2+HW3 I lost all of my configurations. So I set up again my driver profile and "easy entry" profile. Bot ... Post by: f205v, Today at 3:06 AM in forum: Model S

20” Tire reco for range and efficiency Hi folks - I think I am going to pass on 22” rims and instead grab a set of used 20” slipstreams and powder coat black. I will be towing a fair bit so ... Post by: tommytuna, Today at 5:28 AM in forum: Model X