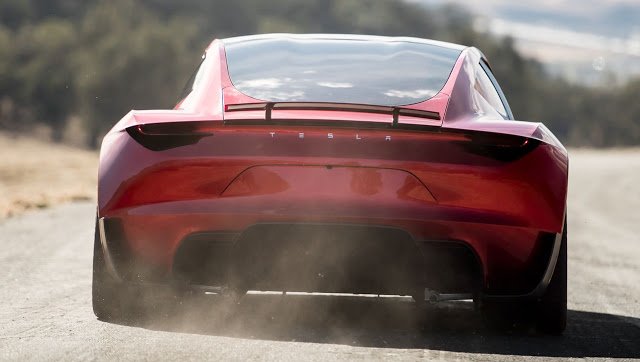 Tesla Chief Executive Elon Musk said on Twitter this week that the next version of the company’s Roadster sports car could hover over the ground with the help of thrusters borrowed from his rocket company.

The new Roadster will actually do something like this https://t.co/fIsTAYa4x8

Musk was responding to a follower who sent him a GIF of the flying Delorean from “Back to the Future” movies. “The new Roadster will actually do something like this,” he commented. Pushed on whether he was kidding, Musk said he was not.

“Will use SpaceX cold gas thruster system with ultra high pressure air in a composite over-wrapped pressure vessel in place of the 2 rear seats,” Musk wrote.

He later added that “you can basically accelerate at the limit of human endurance.”

Papafox's Daily TSLA Trading Charts View attachment 515159 Today the market gave us a head fake in pre-market trading, suggesting that the market had eased up on its coronavirus worries.... Post by: Papafox, Yesterday at 4:30 PM in forum: TSLA Investor Discussions

Yellow Screen border, poor quality & workmanship,... I purchased a brand new Tesla model S in 2018 through one of my best experiences with car sales. No-haggle, accommodating salesperson, and an effortle... Post by: Rborhani, Yesterday at 9:44 AM in forum: Model S

Look what my son made me in school Good use of school maker space time! Post by: Birdman325, Yesterday at 4:55 PM in forum: Model 3

Electrofied Garage Equivalent in Seattle Area? Hello Everyone, I'm considering the purchase of a branded title M3 and I want to get my logistics of supporting that vehicle in place prior to th ... Post by: Sadus671, Today at 10:41 AM in forum: Model 3

New MX QI wireless charging... Has anyone received their MX with this fitted as standard yet? I ordered after the change on the site by the looks of things just wondering if anyone ... Post by: GrumGrum, Today at 5:56 AM in forum: Model X