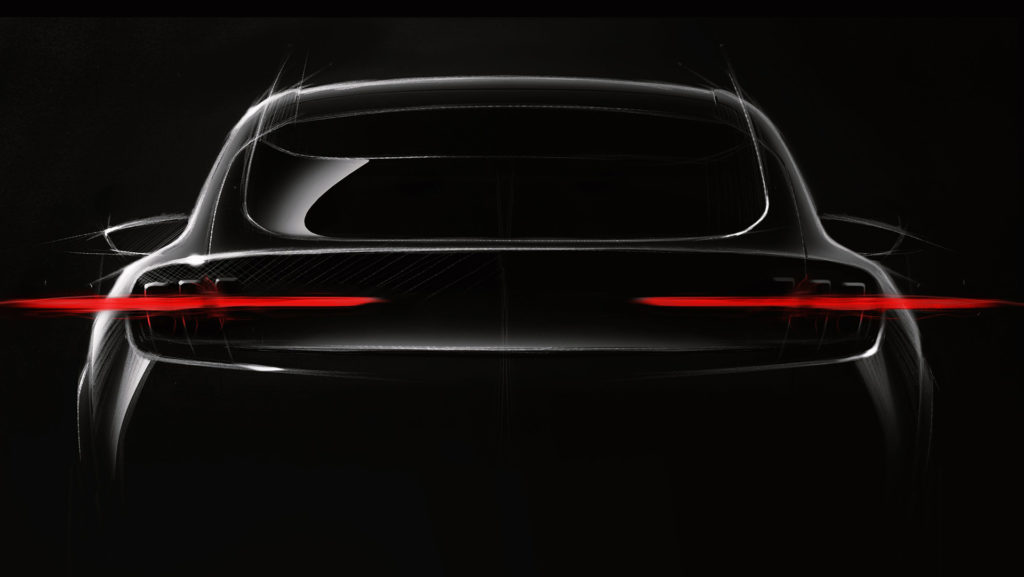 According to Ford, the two vehicles could even arrive on the market at the same time.

Ford says that its first dedicated electric car, which will be a Mustang-inspired plug-in crossover, will be positioned to compete with the recently revealed Tesla Model Y.

If you recall, Ford posted a tweet in the moments leading up to the reveal of the Model Y. The tweet, as seen here, simply stated: “Hold your horses.” In a way, Ford was trolling Tesla with a reference to the upcoming Mustang-inspired electric CUV. The timing of the tweet was spot on though, as it directly lined up with the Model Y’s grand reveal.

Now we learn via CNBC that indeed the tweet was directed at Tesla. In fact, CNBC says that Ford President of the Americas Joe Hinrichs adds that the Mustang-inspired electric vehicle should hit showrooms around the same time as the Tesla Model Y. Here’s the quote from Hinrichs:

“The company is moving quickly toward producing what it previously described as a Mustang-inspired all-electric SUV that will be in showrooms next year, about the same time Tesla begins to deliver the first Model Y battery-SUV.”

So then, both vehicles should arrive late next year. Model Y pricing ranges from $39,000 (available at a later date) to $60,000. We don’t have any information on pricing for the electric Ford at this time though.

What we do know is that Ford’s electric vehicle will be performance oriented and that it will go over 300 miles on a charge. Beyond that, not even an official name for the EV has been released other than that it won’t be called the Mach 1, as Ford initially hinted at. It could be called the Model E though.

Ford has been largely absent in the electric car segment, so it’s interesting to hear that the automaker is aligning itself to take on Tesla. 2020 could be the year that the electric automaker sees itself up against some strong domestic competition.

Near-future quarterly financial projections Grand Venus left from SFO, going to Europe after all! So we may be in for some FCA credits. Franco Mossotto on Twitter @Troy Post by: hobbes, Yesterday at 10:34 AM in forum: TSLA Investor Discussions

Coronavirus SageBrushI hate Twitter and its screen captures. What is the link to the data you like ?Links from below image: 1) National Center for Health Statisti... Post by: scottf200, Yesterday at 11:59 AM in forum: TSLA Investor Discussions

Coronavirus ram1901Perhaps you are not aware that the vast majority of those getting Covid-19 are treated and recover and go home. The majority who die, do so, be... Post by: dfwatt, Yesterday at 9:07 AM in forum: TSLA Investor Discussions

Coronavirus ram1901Not my quote: Quote from national publication. ""Symptoms of COVID-19 can appear from two to 14 days after you’ve been exposed to the... Post by: bkp_duke, Yesterday at 9:59 AM in forum: TSLA Investor Discussions

Coronavirus ram1901some folks are too sedimentaryThat reminds me of the joke: Why are some rocks so lazy? They live a sedimentary lifestyle. Post by: AlanSubie4Life, Yesterday at 10:53 AM in forum: TSLA Investor Discussions

What's the POINT of a glass roof? Before I bought my Model S I was concerned about whether the sun would heat the interior up to the same sort of temperature at the surface of the sun. ... Post by: Wol747, Today at 12:35 AM in forum: Model S

Backing up protection Does tesla provide a feature i can turn on to prevent backing up collision protection? I cant find anything that talks about that after searching and ... Post by: tguer21, 49 minutes ago in forum: Model X