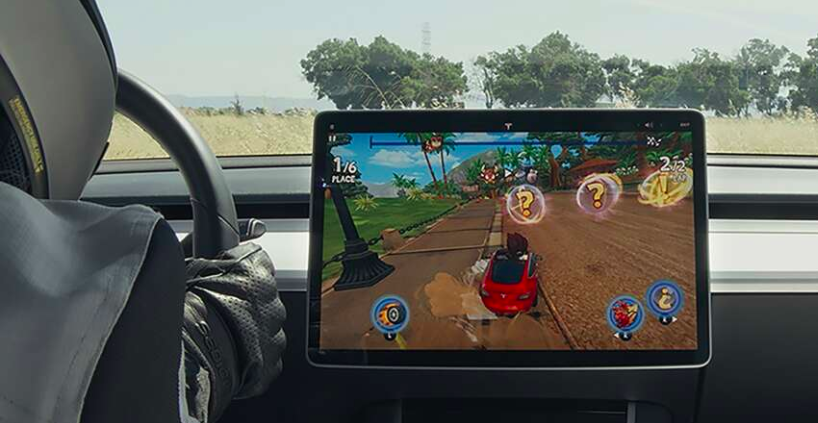 Tesla In-Car Entertainment is a Glimpse at Robotaxi Ride Experience

There was a time when a TV screen tucked into a car headrest was the ultimate showy in-car extravagance, usually reserved for luxury or custom cars.

But, advances in screen technology and a lower cost of production meant it didn’t take long before video entertainment systems were fairly common in not just luxury cars, but family minivans and SUVs.

For about 20 years after, the pinnacle of in-car entertainment – TVs all up in the headrest – was fairly common.

Then Tesla shook things up in 2012 when it debuted the Model S with a giant internet-connected touchscreen. It was the first time in a long time an automaker had introduced a feature to take in-car entertainment to a new level.

Part of that may be because the company envisions consumers kicking back to watch a movie in a robotaxi sooner rather than later.

During a Q&A session at the gaming event E3 in LA last month, Musk said that Tesla will offer support for YouTube “someday soon.” Then last month, he said on Twitter that Tesla vehicles will also be capable of streaming Netflix.

What’s more, he talked up the experience. A car that feels like a comfortable movie theater.

Video streaming will certainly be appreciated by Tesla owners who can now keep up with their Netflix watchlist while charging.

Unfortunately, it’s not clear how “soon” the services will hit Tesla screens.

Elon Musk is an avid gamer and keeps track of popular titles, so it’s no surprise that he’s trying to boost the gaming options offered in Tesla cars.

He said recently that the company is working on porting the Unity and Unreal video game engines, which are among the most popular development platforms for games. He also excited gamers with news last month that the breakout hit Cuphead – a “bullet-hell shooter” – will be available to play in Tesla vehicles. The game debuted on Xbox One and PC in 2017 and Nintendo Switch this year.

“Cuphead, we’ve got working,” Musk said on the Ride the Lighting podcast. “[The developers] have been helping us make it work. It’s a cool game. It’s insanely difficult. It’s sadistically difficult. It’s a twisted plot. It’s dark. It looks like some cute little Disney thing and you’re like, ‘This plot is very dark.’”

Tesla has also introduced Beach Buggy Racing 2, which can be controlled using the actual steering wheel and brakes of the car when it’s in park. Tesla also recently introduced Bethesda’s Fallout Shelter, a free-to-play post-apocalyptic themed game that came out for mobile devices in 2015.

But, it’s not all bullet-hell shooters and buggy racing, Tesla has also recently introduced Chess as quieter, classic gaming option.

Musk first revealed Tesla’s efforts to bring games to its cars last August when he announced the “TeslaAtari,” which includes classic titles like Centipede, Asteroids, Missile Command, Super Breakout and 2048.

Tesla has also been trying to use its in-car gaming to attract customers. In a post on its website last month, Tesla invited consumers to bring friends and family to a Tesla showroom to “experience the new Tesla Arcade.”

Elon Musk seems set on these cars driving on their own.

Speaking at the company’s recent “Autonomy Day,” he said that by the middle of 2020, Tesla’s autonomous system will be so capable that drivers will not have to pay attention to the road. In fact, the company hopes to roll out autonomous taxis next year in some parts of the U.S.

“We will have more than one million robotaxis on the road,” Musk said. “A year from now, we’ll have over a million cars with full self-driving, software… everything.”

Perhaps the entertainment push is part of that “everything.”

Tesla already had a great platform for entertainment in its vertical touchscreen in the Model S and Model X, but made an improvement with the Model 3 screen. It’s configured in a landscape format that’s more appropriate for games and videos. Some Tesla watchers have observed that the Model 3’s screen resolution is 1920×1200, but subtract the 120px used for the bottom controls and the screen measures 1920×1080, which is perfect for high-definition video.

Tesla reportedly plans to refresh its flagship Model S and Model X vehicles soon with a similar interior layout to the Model 3 and Model Y, using the same landscape orientation for the screen.

Just for fun or the future?

For most cars on the road, it does seem a bit silly to build the interior of the car like a living room. Sure, cupholders are helpful. Cuphead the bullet-hell shooter may be too much.

It’s hard to imagine someone making a car decision based on its video game offerings, particularly when their smartphones offer plenty of apps for games, videos, and other entertainment options.

The thing is, games and videos don’t make safe sense for people who are busy driving.

But, as was on display at the company’s recent autonomy tech showcase, Tesla is boldly proclaiming that consumers will be able to kick back for a fully autonomous ride in its cars next year.

Musk is often bold and admittedly often late to deliver. Most industry watchers don’t believe self-driving cars will have any significant deployment for more than ten years.

But it’s fun to think about Tesla’s entertainment efforts as a sign that – games aside – we may have a very different type of commuting experience coming sooner than later. Or it could just be for fun.

Model Y delivery yesterday - few thoughts relative... Had a long range Model Y on order and heard that the local SC had a few Y's that had become available. The long range in Midnight Silver was clai... Post by: WolfieSenior, Today at 10:41 AM in forum: Model Y

Coronavirus On the lighter side, you can buy C19 masks for your dog. Two dogs and a cat have been documented to have caught C19 from their owners. This will certa... Post by: MXLRplus, Today at 8:34 AM in forum: TSLA Investor Discussions

HELP: stock springs Hey can someone help me. Not sure what I’m doing wrong but trying to put the stock springs back on. I have everything lined up. Spring to the bottom o ... Post by: pwrusr, Today at 2:32 PM in forum: Model 3

Does Model S HVAC have air ionizer? I came across the following thread but no conclusive answer: What happened to the Ionizer? It seems the Model S used to explicitly have an air ionizer ... Post by: PhilDavid, Today at 2:49 PM in forum: Model S

Take your Tesla to the Emergency Room! Last night my husband needed to visit the ER. Something we avoid like the plague and especially didn't want to go due to the pandemic. Two weeks ... Post by: jordanX, Today at 2:26 PM in forum: Model X