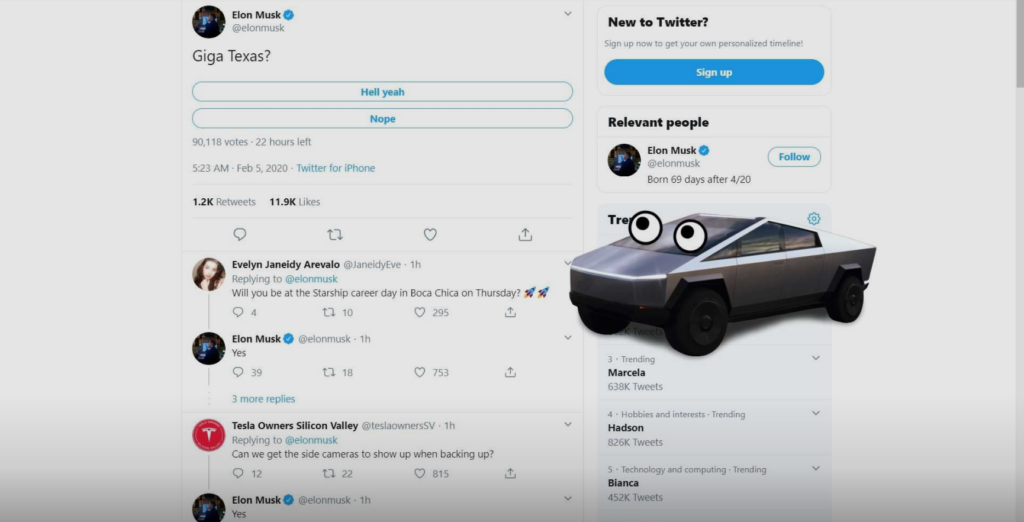 Musk Asks About A Texas Gigafactory: Is It For You, Cybertruck?

The innovative electric pickup truck would be the perfect fit for the new plant.

No company would leave the decision to open a factory to a Twitter poll. Anyway, Elon Musk decided to give his Twitter followers that feeling when he started one about a possible Tesla Gigafactory in Texas. You can see that on the image above and the real poll linked below.

As you may imagine, the decision is probably already taken, but asking supporters and fans what they think of a new important step for Tesla – knowing what their answer will be – helps give them the impression they were taken into consideration. Or even decided anything.

The fact is that there is a need for more production capacity, especially considering the Cybertruck demand and all the vehicles Tesla is yet to manufacture, such as the Roadster and the Semi. We do not even mention the Model Y because it is on the verge of being delivered. A Cybertruck made in Texas would be the perfect fit for the company.

First, because Texas is the most important US state when it refers to pickup truck sales. This article from The Motley Fool shows it represented 16.6 percent of all F-150 sales back in 2018. We have no reason to believe things have changed that much in two years.

Second, because Texas was one of the states that hated the Cybertruck when it was first presented. Geographically, it is in the heart of the places that did not like it, but people usually take pride in what is produced locally. Manufacturing the Cybetruck in Texas would raise its acceptance in a crucial market.

The final reason for that is that the Cybertruck will be an entirely new product, with an innovative body construction, the stressed-skin structure, or exoskeleton. Instead of paying a lot of money to retool Fremont to produce it there, why not build a new factory that could handle its manufacturing?

Tesla now knows how to do that at a swift pace after the Gigafactory 3 started to operate in Shanghai way ahead of schedule. Will they be able to apply the same speed to something in the US? Considering that such a Gigafactory would not have to spend much, as Sandy Munro told in a chat at Autoline After Hours, that is a strong possibility.

"Warming up" when trying to use Smart Summon Hey Everyone, So.. I've never had this issue before when using Smart Summon. But when I try to activate it, I get a forever message of "Warm ... Post by: McFlurri, 46 minutes ago in forum: Model 3

6 sudden error messages My wife was driving the car today, and all of a sudden she got bombarded with error messages (see attached). Roadside assistance walked her through re ... Post by: chukiechz, 54 minutes ago in forum: Model X