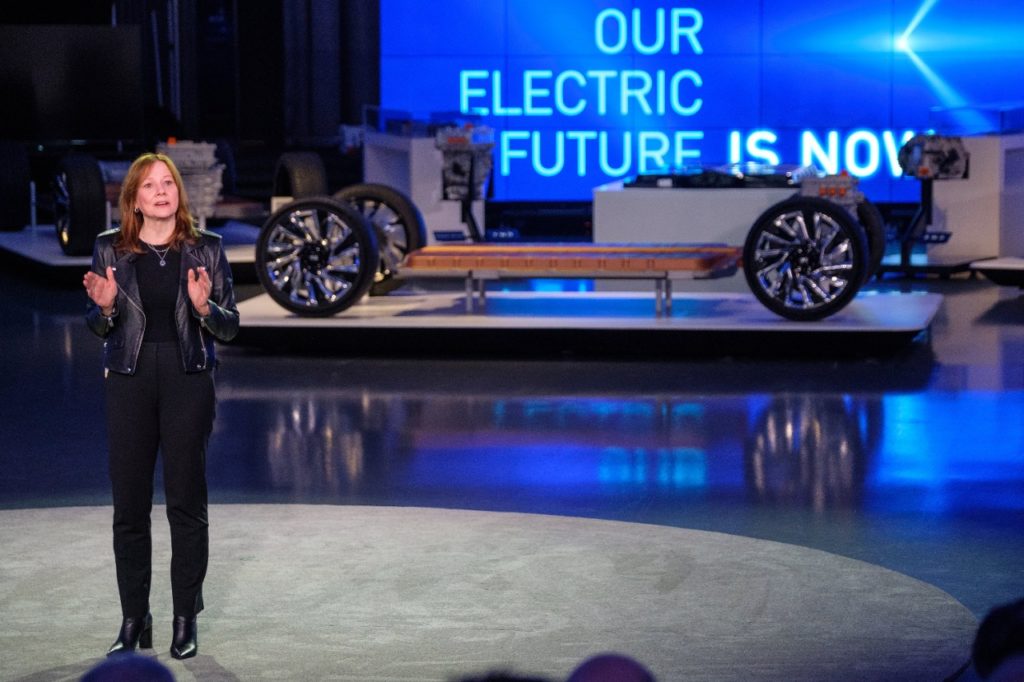 The General Motors EV1 was the first vehicle produced by the company to wear General Motors on the nameplate. America’s largest automaker reserved its name for an electric vehicle.

The enthusiasm was short-lived, however. Though it was the first mass-produced electric vehicle from a major automaker, the EV1 was only produced from 1996 to 1999. The entire EV1 program was shut down in 2003, with GM saying it could not sell enough of the cars to make the electric product line profitable.

That excuse has received plenty of criticism, mostly suggesting that GM axed the electric vehicle program because, if successful, it may disrupt other profit centers for the company. The documentary Who Killed the Electric Car? claims GM scrapped the EV1 even though it had steady demand. The film includes footage of GM employees on the EV1 team discussing a waiting list for the car.

Electric power didn’t return to GM vehicles until the Chevrolet Volt plug-in hybrid debuted in late 2010. The Chevrolet Spark EV was then released in June 2013, becoming the company’s first all-electric passenger since the EV1.

The next important introduction for GM’s electric efforts was the Chevy Bolt, which hit streets in 2016. The car quickly attracted accolades, including the 2017 Motor Trend Car of the Year award. The car sold about the same number of units that year as Tesla’s Model S and Model X offerings. Then came the Tesla Model 3 in 2018, which clinched the sales leaderboard for Tesla.

While GM reportedly takes a loss on every Bolt sold, it’s charging forward with a comprehensive plan to electrify its offerings across its portfolio of brands. Last month the company held a showy press event to announce that it will have 20 electric models in showrooms by 2023, some even sooner.

A larger SUV version of the Bolt is expected to debut later this year. A refresh of the car – modest styling changes, slight bump in range to 259 miles – has been delayed until 2021 due to the cornovirus outbreak.

Next GM will bring back the Hummer name for an all-electric GMC pickup. Having one of the big American pickup builders borrowing the tough stylings of the Hummer will make for a great electric offering to the traditional pickup public.

With a scheduled release in 2022, the GMC Hummer EV will come just after the Tesla Cybertruck tests the electric pickup market in 2021. It will be an exciting era for pickups as electrification and new players create the need to innovate and add utility beyond battery power. See some of the Cybertruck’s promised features like onboard power for tools and a loading ramp built into the tailgate.

Of course, GM will also rush out an all-electric version of the crowd-favorite crossover SUV. It will come in the form of a Cadillac dubbed Lyriq, though Cadillac canceled the April 2nd debut of the vehicle due to the coronavirus outbreak. Both the Lyriq and the Hummer are expected to arrive in showrooms by 2022. The company has yet to cancel the May unveiling of the Hummer.

“Our team accepted the challenge to transform product development at GM and position our company for an all-electric future,” Mary Barra, GM chairman and CEO, said in a release. “What we have done is build a multi-brand, multi-segment EV strategy with economies of scale that rival our full-size truck business with much less complexity and even more flexibility.”

GM is calling its EV platform “Ultium,” describing it as a “modular propulsion system” to be used across a range of vehicles.

GM highlighted a few reasons it thinks it can leverage its experience, scale and the Ultium system to be competitive in electric vehicles:

Flexibility: GM plans to use the same platform to build a wide range of trucks, SUVs, crossovers, cars and commercial vehicles. The company believes the system enables them to “compete for nearly every customer in the market today, whether they are looking for affordable transportation, a luxury experience, work trucks or a high-performance machine.”

Capital Efficiency: GM can spend less capital to scale its EV business because it is able to leverage existing property, including land, buildings, tools and production equipment such as body shops and paint shops.

Rising Customer Acceptance: GM points to analysts who see swift adoption of EVs as more models are launched in popular segments, charging networks grow and the total cost of ownership to consumers continues to fall.

Interestingly, GM and Honda have agreed to jointly develop two all-new electric vehicles for Honda, based on GM’s Ultium batteries. The exteriors and interiors of the new EVs will be exclusively designed by Honda, and the platform will be “engineered to support Honda’s driving character.” Additionally, Honda plans to make GM’s hands-free advanced driver-assist technology available.

The cars will be manufactured at GM plants in North America. Sales are expected to begin in the 2024 model year in Honda’s United States and Canadian markets.

GM’s new Ultium batteries are unique because they can be stacked vertically or horizontally inside the battery pack. This allows engineers to optimize battery energy storage and layout for each vehicle design.

Packs can vary from 50 to 200 kWh, which could enable a GM-estimated range up to 400 miles or more on a full charge with 0 to 60 mph acceleration as low as 3 seconds. Motors designed in-house will support front-wheel drive, rear-wheel drive, all-wheel drive and performance all-wheel drive applications.

Tesla certainly has a big head start in electrification compared to many auto manufacturers, but GM has been testing the technology and the market for decades. Yes, GM’s electric offerings are going to be competitive with Tesla. They’ll build comfortable, affordable, reliable EVs, and have the ability to do it a a massive scale. But, thankfully Tesla forced the competition. They’ll likely continue to force the legacy automakers into trying something new.

TMC Iceland Meetup 2020! So, I've been informed that Audubon is no longer here, who was the reason why I had to leave. I'll try to post occasionally updates and let... Post by: KarenRei, May 8, 2020 in forum: EVents

Notice anything peculiar? Texas is readying for independence? Post by: SlimJim, Yesterday at 10:22 AM in forum: Model 3

Largest Spacer Using Stock Lug Bolts Some say 5mm is the largest but then I've heard 7 or 8mm is doable too. If anyone has any experience and can enlighten me I would appreciate it! ... Post by: Guntings, Today at 8:45 AM in forum: Model 3

Parking Sensor(s) May Be Obstructed Hi all, was wondering if anyone had a clue what this could be. I am getting the error on the title. I am also showing that the front right side sensor ... Post by: 1ton, Today at 9:59 AM in forum: Model S

Those silly jets I keep reading about those “jets” that are going to make the roadster quicker. The last said the license plate would drop down and the high pressure a ... Post by: D.E., May 28, 2020 in forum: Roadster 2020+