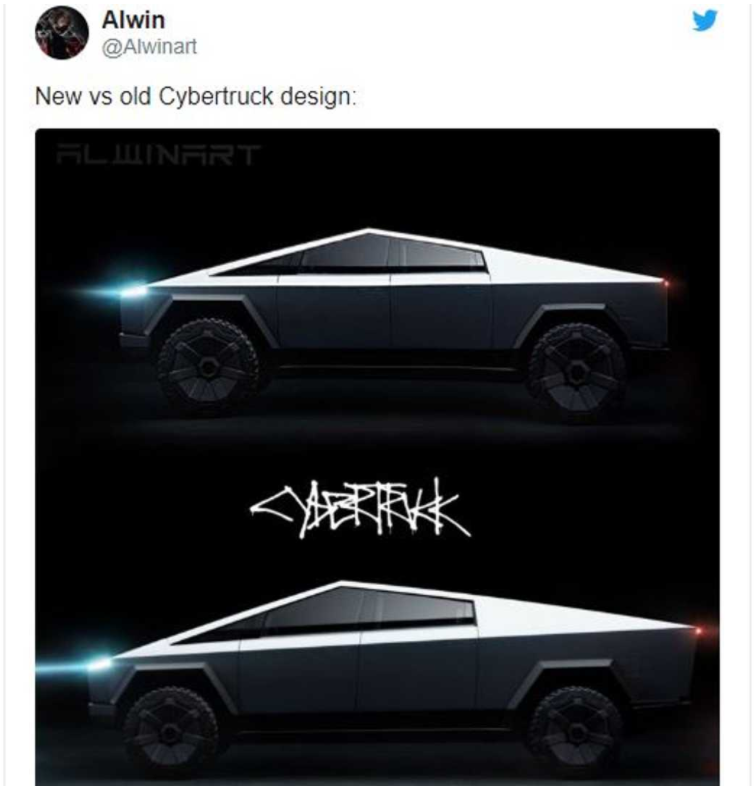 It’s still just a concept, so expect more changes to the Tesla pickup truck as production draws near.

Tesla CEO Elon Musk says that the Tesla truck, called the Cybertruck, will change to take on a more traditional truck-like appearance. The changes will be minor, but when added together, the look will be a bit more traditional and less polarizing, we think.

Don’t think for a second that Tesla is backing away from the polarizing, angular outward appearance of the Cybertruck. Rather, a few minor changes will make the truck more useable and enhance its appearance in that it will look slightly more conventional. See below for a look at how the new Cybertruck design (top) might present itself and a look at how the current Cybertruck appears right now (bottom image).

What you can’t see in the image (top) is that the windowsill will be lowered, perhaps even considerably. This will greatly enhance outward vision and make the cabin feel more airy. A few more changes that are noticeable in the rendered image include that the truck’s size will be reduced by around 3% and that the centerline of the truck is more level. In the depiction, the level centerline makes for a bed height that’s not so outrageously high.

These changes were detailed by Tesla CEO Elon Musk in a recent tweet.

Musk is apparently reviewing the design of the Cybertruck with the truck’s design team and some changes will come from this. Additional changes have not been made public yet, but we expect Musk to reveal more info about the Cybertruck as the design process continues.

UK 2021 Model 3 Q1 collection and delivery experie... Hi everyone! So we have now collected our LR M3 and it’s pretty much perfect, panel gaps are tight and consistent over the entire car, bonnet alignmen... Post by: JonoVFX, Today at 2:26 AM in forum: The UK and Ireland

FSD Upgrade Option Gone The $10k FSD upgrade is no longer available on my app, anybody know why? Post by: Kerry Blue, 16 minutes ago in forum: Model 3

Model S Windshield Wipers Hello, I purchased a new Model S in November 2020 and absolutely love the car. However, I see a lot of complaints about how poorly the wiper blades wo ... Post by: Bogartg1, 15 minutes ago in forum: Model S