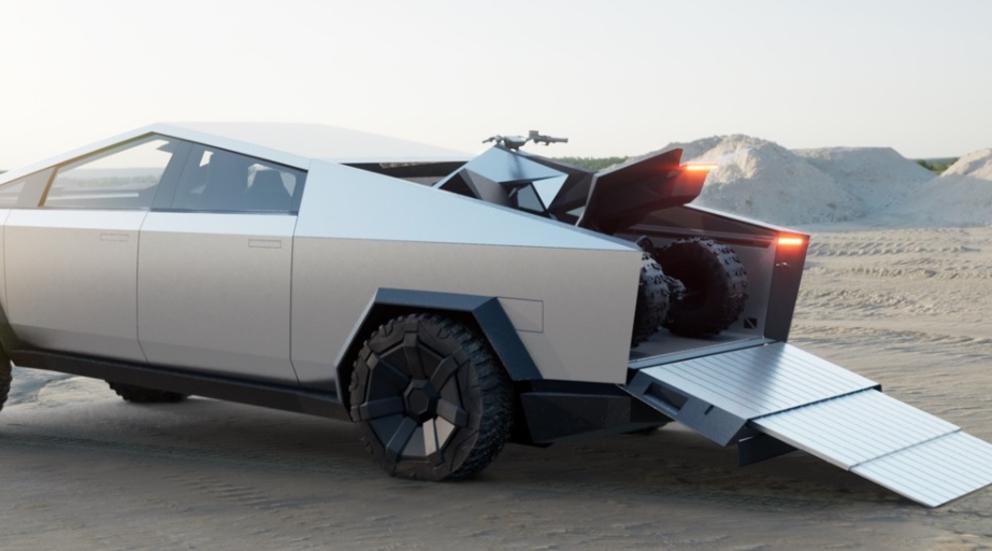 After Tesla employees were finished smacking the Cybertruck with a sledgehammer and shattering its windows, Chief Executive Elon Musk told everyone goodnight.

“One more thing!” fans yelled, hoping to experience something on par with a secret supercar rolling out of an electric 18-wheeler.

“Should we do the..?” Musk’s voice trailed as he spoke to someone offstage.

“Oh, yeah,” he remembered, turning back towards the audience.

“We also made an ATV, so…” he said, strutting back to center-stage.

Then a man loaded a four-wheeler into a truck. Or, rather, a man in black loaded a Cyberquad into a Cybertruck. Seems like a weird flex, but did you see the loading ramp slide out of the tailgate? Did Tesla build an ATV to demo a tailgate?

Either way, the Cyberquad now joins the Cybertruck and the aforementioned Roadster supercar and all-electric Semi in the future Tesla product pipeline.

So, what are the Cyberquad specs? We don’t know. Why do we need it? Mars, maybe. It also looks sweet in the back of a Cybertruck. You can just pull a loading ramp out of the tailgate and drive the Cyberquad right into the bed. “Space for your toolbox, tire and Cyberquad, with room to spare,” Tesla’s website says.

The design of Tesla’s “Cyber” vehicles are certainly striking. Musk has described the aesthetic as “a really futuristic-like cyberpunk, ‘Blade Runner’” style. The future of design is raw metal triangles. The Cyberquad looks like origami. Or, maybe Tesla would describe it as “fold-formed ballistic armor.” Still, it looks tough and compliments the Cybertruck well.

So, the Cyberquad is cool. It looks cool driving up a ramp. It looks cool taking a ride in the Cybertruck bed. But, there’s some speculation that when Musk said that Tesla “made an ATV” he meant that they dressed up a Yamaha.

ATV enthusiasts quickly called out Tesla for pretending the Cyberquad was a ground-up creation. Close-ups revealed that the Cyberquad may have been built on a Yamaha Raptor platform, with Tesla adding electric power and new sheet metal.

Still, it would be a solid base for the Cyberquad. The Raptor is one of the most popular performance ATVs on the market. Also, this wouldn’t be the first time Tesla borrowed from another vehicle platform, as the original Roadster was a modified Lotus.

Much of the mission of the Cyberquad is to be an accessory for the Cybertruck. It’s an outlandish product as an option. Musk said on Twitter in November that the two-person ATV will first be available to Cybertruck buyers.

Since their debut, Cybertruck and Cyberquad have been an ensemble performing together for the company. The first appearance for the vehicles outside of their unveiling was a music video for Travis Scott, one of the hottest rappers in the world. The video for the song “Gang Gang” appears to have been filmed at Tesla’s Design Center in Hawthorne, Calif. The Grammy-nominated musician and a regular in celebrity gossip publications, is shown atop the Cyberquad turning donuts around the Cybertruck while firing the Boring Company “Not-a-Flamethrower.”

The next close-up for the Cyberquad could come next week on the new season of Jay Leno’s Garage. CNBC released a promo video for the 5th season, which teases appearances by Musk (princess), Cybertruck (party dress), and Cyberquad (purse). The new season starts May 20, but the specific date of the Tesla episode hasn’t been shared.

Who knows if the episode will answer any questions about the Cyberquad. It would be great to know speed, range, and price. Is it actually a Yamaha when naked? Will there be a Yamaha partnership? Will their be others – a Cyberboat? A Cyberbago?

Judging by Jay Leno’s promo, we’re at least going to get a great demo of the Cybertruck’s tailgate ramp.

Will you be adding the Cyberquad option to your Cybertruck?

Giga Berlin-Built Model Y Could Roll Out in 2021