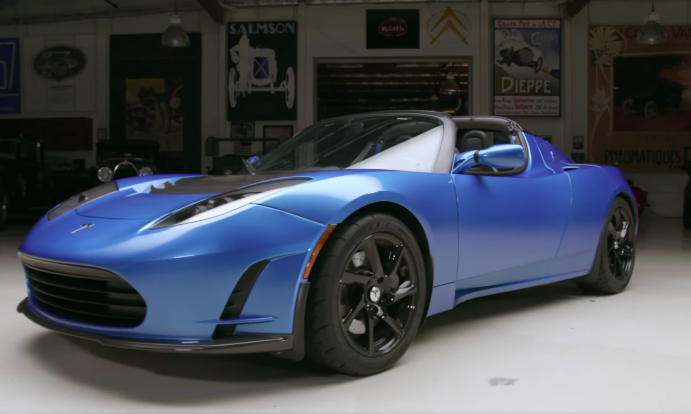 TMC Member AltPwr and his Electric Blue 2010 Tesla Roadster (VIN1094) had an exciting opportunity to appear on the CNBC show “Jay Leno’s Garage.”

The episode is set to air on CNBC at 7 p.m. PT July 8 (Wednesday) . A teaser for the episode was posted to Facebook.

Ahead of the episode, AltPwr was kind enough to write up some of his experience of what it’s like to roll your ride into Leno’s garage.

Check out the behind-the-scenes story he shared with us below:

I’m a member of a small private Facebook group called the Tesla Roadster OWNERS Group. It’s a small community of us Roadster owners and this is one of the Facebook groups along with the Tesla Motors Club forums that I follow. The admin of the FB group was contacted by a person that works with Donald Osborne in order to get certain vehicles for episodes on the show. They contacted him regarding his Roadster, however he had sold his Roadster so passed on the message to the group.

I followed up with the contact and was chatting on the phone with them the next day. Once I sent pictures of the car and a description of the options, car’s history, condition, etc., they setup a call with Donald and me. I chatted with Donald on the phone and setup a meeting in person at my house in November 2019 so we could meet, and he could see the car in person. Obviously, it was fun meeting with Donald and talking cars since I have watched all episodes of Jay Leno’s Garage, even when it was originally online only. We actually chatted about both my Roadsters – my 2010 Tesla Roadster as well as my 1932 Ford Roadster. Donald found the contrast pretty unique – daily driving a Model 3, weekend driving a Tesla Roadster, and also weekend driving a loud gas eating 600HP 1932 Roadster. Some of us buy Teslas with performance as the first criteria. Hopefully I zero out my carbon footprint with my assortment.

Anyway, Donald inspected the car, taking notes about condition, checking everything out so he could write up an appraisal. The idea for this episode is called “All Play and No Work” – so basically around vehicles that are strictly for play. The Roadster is not your typical car to take to the grocery store or home improvement center. You can, but it would be limited. Then he asked if I would be willing to be on screen talking about the car. Gulp. I said “sure, why not.” The filming was scheduled for the following week, so I was already nervous. I wanted to represent the Roadster properly for all other Roadster owners, but I also didn’t want to make a fool of myself.

So, it’s now filming day and I’m allowed to bring along someone with me, so I brought my son who is also into cars. We hung out in the lunchroom with the other crew members, and had free reign to wander throughout the entire garage. Holy crap! Bucket list item right here. The place is MUCH bigger than it looks on TV. They use a certain central area for most filming where they have a very large light hanging from above to properly light up the featured car along with Jay, Donald and others in the scene. I’m actually not sure I have ever seen the entire place filmed before. So, we took a walking tour around the whole place, looking at all of the various cars. Basically, it’s a museum in one building and a workshop in another. First thing I noticed, none of the cars are dusty – so he must have staff that goes around dusting them all the time. None of them were covered. I did not take any pictures – I just felt it would have been imposing to ask permission, so played it cool. But there were two Lamborghini Miuras right next to each other, and across from them was a McLaren F1! And that was only the entrance area. Tons of cars I remember seeing on many of the episodes.

When Jay showed up, he pulled in with his Model S and plugged it in. Donald introduced him to me, we chatted, and he went about his business. The first part of the process was to mount what seemed like about 10 cameras on my Roadster. I was cringing, but they were very careful. They mounted on the windshield and around the body several cameras the size of Go Pro cameras. I ended up temporarily removing the two sun visors so they could get the cameras mounted up higher out of the line of site. The plan was for Donald and Jay to go drive around the city in the car and talk about it. There was also a camera truck that filmed them on the road. They were gone for what seemed like over 90 minutes or so. To this day, I have yet to see the footage they took when driving around in the car – I’m hoping that shows up in the episode tomorrow (July 8, 2020). I really hope they got a kick out of the performance of the car – I guess we’ll see.

Once they came back from the drive, the crew removed all of the cameras carefully and we put the car in position inside the garage in the central spot where filming takes place, under the large lighted panel. As far as I can tell, Donald and Jay may have discussed what they were going to say, but they did not share anything with me. I was extremely nervous because I didn’t know what questions I would be asked or where I would add comments. They carried on a conversation like two car guys talking about the car – nothing looked rehearsed at all. Donald then introduced me and pulled me in and started asking questions. We must have talked and filmed for what seems like over 30 minutes. My assumption is they do this, then later pick out a few segments that work well together and edit it together. So far from the preview posted online, that is what they did. I thought it was funny when Donald asked for my thoughts on value, but then said “interesting” and then just stared at the camera. I then realized that is what he does many times, and that is when they cut to a commercial. It was just strange seeing it happen in real time without any warning. We then filmed a bit more where he gave his valuation of the car and we closed off the filming.

Jay and Donald thanked me, chatted for a bit, then we hung out while they used cameras on cranes to pan over, up, and down the car – which you see throughout the episode. Once done, we were on our way back home and have been waiting patiently 8 months to see how it all turned out.

Sounds like an amazing experience. Thanks to AltPwr for sharing! He also shared a photo of the Roadster alongside his Model 3 and ’32 Ford.

Check out the episode tomorrow. In the meantime, what do you think the Roadster will appraise for?

The Resource Angle mikevbfAnyone going to check this out tonight?So I listened in. Fascinating. Hosted by Benchmark, which is an analyst company for the mining sector. T... Post by: Cosmacelf, Yesterday at 7:18 PM in forum: TSLA Investor Discussions

Cabin Overheat Protection not cutting on?? I have a new M3P, I have the car outside with the cabin overheat protection on. It's registering at 120 degrees, I have sentry mode 'off ... Post by: dustym3perf, 13 minutes ago in forum: Model 3

Extended Service Agreement I tried searching for relevant posts in the last 12-18 months but didn't find anything. Tesla is notoriously capricious with their their practice ... Post by: BBB4000, Today at 9:29 AM in forum: Model S

Wisconsin: buy a Model X, fears My state sucks for renewables and EV's, as can't purchase a Tesla new in the state of Wisconsin, so I will have to go elsewhere and import t ... Post by: FirstInTown, Yesterday at 12:19 PM in forum: Model X