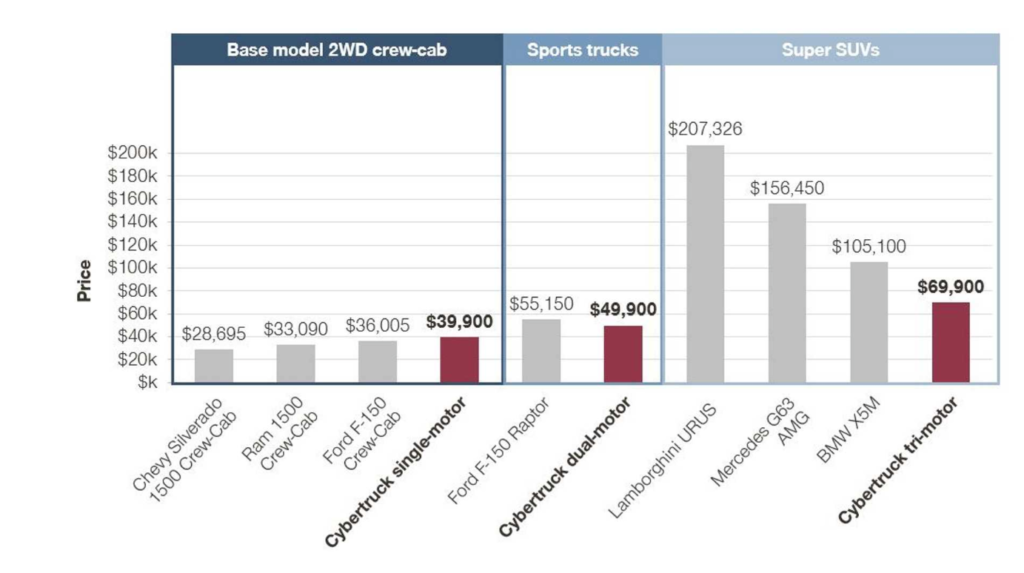 Tesla Cybertruck Pricing Needs To Improve, According To Marketing Company

Simon-Kutcher & Partners points out what it believes to be “unused potential.”

Most Tesla vehicles so far are presented with a killer entry-level price that is just for show. That’s the case for the Model 3 Standard Range, for example. We bet the Model Y will get into the same situation. Why would the Cybertruck be any different, right? Perhaps unaware of that, Simon-Kutcher & Partners questions Tesla’s pricing strategy for the electric pickup truck in a recent article.

The strategy and marketing consultants company makes valid points about the entry-level Cybertruck. According to the text, it would be too expensive to compete with traditional ground-level pickup trucks. Another issue with it is that it would not accelerate as you would expect a Tesla to do that, going from 0 to 60 mph in 6.5 s.

Simon-Kutcher & Partners claims that Tesla would have a much better lineup if it started with the intermediate trim, the Dual Motor, which will sell for $49,900. It goes from 0 to 60 mph in 4.5 s and tows 10,000 lb. The marketing company thinks that it makes for a much more compelling entry-level derivative.

According to Simon-Kutcher & Partners, if the idea is to offer three trims, Tesla could make a tamed Tri-Motor version of the Cybertruck. It could be sold for $59,900 and attract buyers willing for more performance, but not willing to pay the $69,900 the Tri-Motor version will cost.

Although the arguments make sense, that is not the way Tesla works its lineup, at least not so far. Entry-level trims are practically just an argument of affordability that does not apply to the real world.

Very few Standard Range units of the Model 3 were ever sold, possibly because it took so long for that trim to reach the market that customers preferred to buy a used Standard Range Plus or even Long Range instead.

Tesla already said the first batch of Cybertruck units would focus on the more expensive derivatives, which have the juicier profit margins. When and if the Single Motor RWD starts to be delivered, these more expensive units will already be at the used car market.

What do you think about Simon-Kutcher & Partners’ suggestions to Tesla? Would they be a more attractive alternative to the lineup strategy the EV maker currently adopts? How would it have impacted other cars, such as the Model 3 and Model Y? Share your opinion on that below.

Tesla’s Next U.S. Factory Location Could Be Announced Next Month

Tesla Reveals Cybertruck, “Something Different” for the Pickup Market