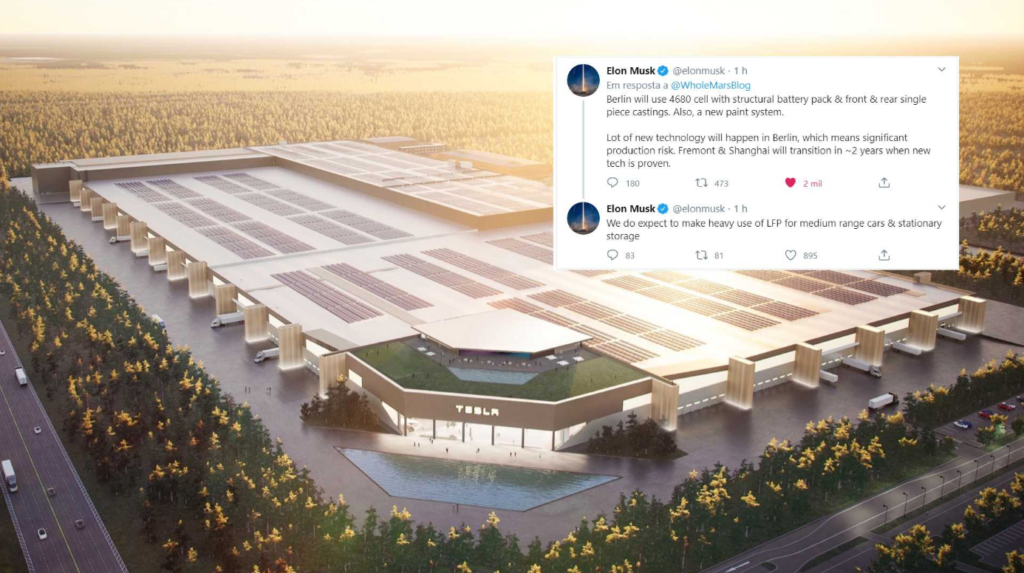 The German Model Y will have 4680 batteries, the new body structure, and more.

Elon Musk clarified a lot of previous doubts we had with a single tweet. The main one was why Fremont did not get the “world’s most advanced paint shop” before Giga Berlin if it still produces vehicles with paint issues. Apparently, Tesla wants to use the German factory as a testbed for all the technologies it has presented at Tesla Battery Day.

When we say all, we really mean it, as you can see in the tweets below:

According to Musk, the European Model Y will use the 4680 cells, but not only that. It will also have the structural battery pack, the mega castings for the front and rear parts of the body, and also the innovative paint process Geico Taikisha offers.

Musk also confirmed LFP (lithium iron phosphate) batteries would play a major role in medium-range vehicles and stationary storage. In other words, the $25,000 car it plans to build and even a hypothetical Model Y Standard Range will have these LFP batteries. The Model 3 made in Shanghai already uses them.

However, that is not the most important part of the message. Musk also said Giga Berlin would test all these technologies, “which means significant production risk.” If they prove to be worth it, Fremont and Giga Shanghai will follow two years later. The reasoning behind that is interesting, but also risky.

Considering the US and China are Tesla’s biggest markets, Musk does not want to take any chances in them. Production will continue the way it currently is to ensure both of them receive the vehicles they want.

Giga Berlin will not have that urgency. Although Europe is important, it can be supplied by China or by the US in case anything goes wrong. In other words, it is the safest location to test these new technologies.

However, that strategy can backfire if Tesla is not able to ensure quality levels that will keep European customers interested. If the structural battery increases insurance costs, that could be a problem.

If the 4680 battery presents any issue, consumer protection entities in Europe can make Tesla’s life in that continent harder than solely with competitors with which consumers there are more used to, such as Volkswagen. What if the world’s most advanced paint shop does not work as Geico Taikisha intends it to due to Tesla’s specifications?

A recent issue in a German court with Tesla’s wiper commands on the Model 3 already gives us an idea of all that could go wrong with this approach. Although it looks safe, it will probably demand the company to change its “deliver now, fix later” strategy.

Upgrade to FSD before increase? On the highway AP is great. In part because it works well and in another part because its a relatively organized and orderly process. Driving around t... Post by: AdamVIP, Yesterday at 6:35 AM in forum: Model 3

Model S inside console wrap So I am in process of wrapping my Tesla model S but I’m stuck on removing the console opener where the USB ports are. I did the one slider cover above ... Post by: ADEEL421, Today at 1:37 PM in forum: Model S