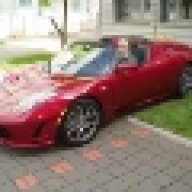 It's party time in Berlin! The electric wave steamrolls the city!!

On June 15 and 16 (featuring Angela Merkel and Alexander Dobrindt as special guests on June 15), a conference will take place that unfortunately is very much influenced by the VDA (the German Association of the Automotive Industry). The German government envisages 1,000,000 electric cars driving on German streets by 2020. As is generally known, the German car companies believe the government's goal to be phantasmal. They also believe that electric cars are not fit for long-distance trips.

Now we know that this is nonsense.

WAVE, the electric car rally, has come to town. The original plan was that about 50 cars would accompany the VDA conference. But this plan has been cancelled – the VDA probably didn't approve of the number of Tesla cars amongst the parade... This is why the WAVE will now start from the premises of the Reichstag at 9:45am on Monday, June 15, to start its grand tour to Switzerland.

If 10 Tesla symbolise too much progress for the VDA, I say we show them what we are made of.

An international rally with Model S (or Roadster) from all over the place is coming to Berlin.

And this is the plan:

Facebook :you will find it at “Tesla in Motion”
Email to: [email protected]

Please provide all necessary information about your stay :

Name, email, mobile phone number
Shall we make a hotel room reservation for you, Su/Mo, Mo/Tu ?
Which kind of room, double or single ?
etc.


Please note: this is a preliminary version of the plan and events and the details can be subject to change. There is a chance that either some or all of the WAVE participants will join a Tesla dinner on Sunday in Schoenefeld.

The challenge is to get 100 Tesla cars to Berlin.

Please spread the word to friends and family who drive Tesla and please advertise the event on other forums as well.

Tesla is happy to support this event in terms of location, catering, charging stations and press contacts.