16A Phantom Battery Charge Back!?

Always have my car on Scheduled Charge at 23:00 each night, battery limit set to 90%.

Parked it in the garage last night and plugged it in (BP Chargemaster 7kW).

Just gone to car this morning, and looking at the app, it took twice as long to charge last night. So jumped in car increased limit to 95% and started the charge, it’s only on 16/16A, normally it’s on 30A!

I’ve rebooted the car and also reset my BP Chargemaster, and then turned off Scheduled Charging (in car screen). Plugged car in and now it’s charging at the full 7kW (30A).

I wonder whether the Phantom Charging bug is back quite a few of us had last year? 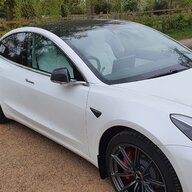 If it’s showing 16/16 it means the charger is only offering 16A, which is not the behaviour we saw with the charging bug months ago.
Reactions: Glan gluaisne
•••

As above, looks like the charge point is only advertising that 16 A maximum is available, or possibly that the charger(s) are wrongly interpreting that the charge point only has 16 A available. The odd thing is that it's 16 A, as that means it would need to be a control pilot signal issue if the charge point is the cause, not a proximity pilot resistance problem, as that doesn't have a 16 A option. The common values in the car connector end of the cable are 220 ohms for 32 A, 680 ohms for 20 A and 1,500 ohms for 13 A, there's no 16 A option. Some charge points have got selectable maximum current settings internally, often using DIP switches. Not sure about the Chargemaster, as I've never had the lid off one, but if it does have a selector internally there's a possibility that it wasn't properly set at installation, and has moved slightly, changing the maximum current that's being advertised to the charger(s).
Reactions: ACarneiro
•••

Just done some digging around, and I suspect this may have been a charge point issue, that was resolved by resetting it. The older Chargemaster has an internal jumper across two pins on the board that is only read at power up. If the jumper is in place the charge points advertises that 30/32 A is available, if the jumper is removed it advertises that 16 A is available.

The fact that the jumper is only read at power on indicates that there may have been something odd, like a spike on the supply or a brief supply dip that may have caused the charge point to re-start without properly reading the jumper. In all probability it was just a one-off, but if it does it again, and resetting the charge point clears the problem, then it could be an indication that there's something awry inside the charge point.
Reactions: ACarneiro
•••

You truly are a fountain of knowledge
Reactions: Glan gluaisne
•••

ACarneiro said:
You truly are a fountain of knowledge
Click to expand...

Not really! In this case I just did a search for the Chargemaster MIs, and found the info about the current setting jumper. Lots of charge points, including the TWC, have some sort of DIP switch/rotary switch/jumper link for setting the maximum charge current, and it turns out that the Chargemaster is one of them. It also seems that reverting to 16 A is a known fault condition, that others have experienced and that can be resolved sometimes by resetting the charge point.
•••
M

Glan gluaisne said:
Not really! In this case I just did a search for the Chargemaster MIs, and found the info about the current setting jumper. Lots of charge points, including the TWC, have some sort of DIP switch/rotary switch/jumper link for setting the maximum charge current, and it turns out that the Chargemaster is one of them. It also seems that reverting to 16 A is a known fault condition, that others have experienced and that can be resolved sometimes by resetting the charge point.
Click to expand...

Brilliant, thank you very much, really insightful!!! When the chargepoint was installed there’s a separate button/toggle switch (now hidden in a junction box) which toggles between 16 and 30A. The engineer forgot to set this properly as I did a quick test whilst he was onsite and the car only charged 16A. He then quickly opened the junction box, pressed the toggle button, and the car charged at 30A, and has being do so for the last 10 months.

Hoping this is an isolated case and will keep an eye on it. Thanks, Mark.
•••

The switch perhaps just connects to the jumper link inside the unit, and it could be that it's the switch itself that might be the cause of the problem. If it happens again, it might be worth isolating the power, opening the junction box up and toggling the switch a few times, in case there's some issue with switch contact resistance.

Toggling switches will often reduce the contact resistance - it's a common trick used to bring down abnormally high loop resistance measurements when testing electrical installations. Nine times out of ten a high reading can be brought back to normal by just flicking the switch a few times and plugging and unplugging the plug.
Reactions: mrkwats
•••
2

My leaf started charging all of a sudden at 16amp instead of 32 and it was something on the charger.
Messed with the charger (rebooted etc) and came back normal
Reactions: mrkwats
•••

P
What is going on with the charge settings?