For Sale: Blizzard white 2013 Toyota RAV4 all-electric vehicle. Approximately 36,700 miles, 7year/100k Platinum warranty from Toyota. Aftermarket "JdeMO" high speed charger has been installed ($3,000 upgrade) which enables hundreds of miles of ALL ELECTRIC driving in a single day (been to the Bay Area, from Santa Barbara, many times). This upgrade is a game changer. Learn more about JdeMO here: JdeMo charging for Rav4EV

Car has had a single owner -- me -- I'm a non-smoker.
115 highway miles per charge.
All maintenance and updates have been done by the dealer. 18 months ago I replaced the stock tires with Michelin Defenders from Costco.
White HOV lane stickers, which transfer with the car. Life changer for LA commuters.

This vehicle is a wolf in sheep's clothing. Only 2600 were made, and sold only in California, through a joint venture between Toyota and Tesla Motors. The electric drive train is supplied and warrantied by Tesla. It is the same technology as Tesla's Model S. With the Tesla drive train, the torque in this vehicle is startling. It makes driving it so much fun. There are two modes -- normal and sport. Switch the car into sport mode and the acceleration and maximum speed are increased to such a point that you know that you're really driving a Tesla. And nobody knows it because it's inside of a RAV4 body!

Speaking of the RAV4, apart from the Tesla Model X, this remains the only crossover-sized all-electric vehicle that's available in California. So if you want to drive electric and also like to move lots of kids, groceries, bikes, and stuff, and you don't want to spend $100K on a Model X, this RAV4 EV is your only choice.

Final thoughts:
- if you have solar at home, you will be driving around on photons created on surface of the sun, captured on your roof, and delivered into your car. That's technological magic. How is that not magic?
- I haven't been to a gas station in almost 5 years. I charge at home overnight. It's hard to convey this, but there is so much freedom and time saved by not having to stop for gas!
•••
R 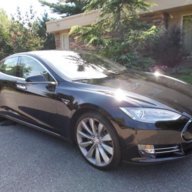 Other Cars for Sale Aug 15, 2020
Incredulocious