I'm close to purchasing one of two 2016 Model X 90ds. One is from a private seller, the other is from a Third Party Dealership. I've been searching the web but cannot get a straight, clear answer to my question so posting it here:

Does Free Unlimited Supercharging (FUSC) transfer to me in either case (private seller or third party dealership)? Is it true that ALL 2016 Teslas have the transferrable free supercharging?

Thanks for any information you can share. This will help in making a decision on these cars.
•••
M

No, not all 2016 Teslas have it. Your best bet is to call Tesla and and ask them about each specific VIN.
•••

On 2016s, with private seller it will transfer (should say so in their Tesla account). With 3rd party dealer it may not.
Reactions: Fiver
•••
M

clarc said:
It will transfer but only if the car is sold through Tesla as a result of a trade-in. Kinda chicken-ship.
Click to expand... 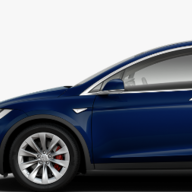 I believe all 2016 X or S had "FUSC for life of car". Back then the only thing you got from referral was a discount.

I've seen multiple people say that it doesn't transfer if you buy through a 3rd party dealer. I think that was written up in some document ages ago.

The only situation I've heard of actually happening is that Tesla has removed it from some of their trade ins.