Oh look! HELIOS RAY's AIS is back up and running. She is in the Red Sea, who'd of thought it?
Last edited: Aug 1, 2021
Reactions: Milhooz and transpondster
•••

The HOEGH ST PETERSBURG is making her way to the pier in Shanghai.
I am very aware that the 2 ships ahead of her (Target, Oslo) had Teslas onboard but I would be surprised if Tesla used this ship as well.
The quantities that Tesla want to ship make a whole ship charter a much cheaper option of getting cars to Zeebrugge.
It's clear that something went wrong towards the end of Q2 (chip shortage? or ship issue?) which meant they were left with a bunch of cars parked up in Shanghai that they needed to get rid of in order to make way for Q3 production and the quickest and easiest was to use space on scheduled services hence the use of HOEGH TARGET, PAGNA, VOLANS LEADER, PASSERO and HOEGH OSLO. These ships would have normally been pretty full but the reduced production levels currently affecting all motor manufacturers (except it seems Tesla) meant that space was available.
On the other hand, it is pretty clear from the Pier 80 cancellations in early July that some radical lastminute changes to production scheduling was occurring which now makes Shanghai responsible for supplying all Model 3 variants to EU and UK as well as supplying Model Y to EU until Berlin comes online later this year. Booking the extra ships for this huge increase in shipments may prove to be a challenge, despite being ideally placed geographically to secure the extra vessels, such that using spare capacity on scheduled services may be a necessity.

Just to put the numbers into perspective, in Q2 we saw a total RT capacity of 40469 shipped from Pier 80 and 26858 from Shanghai totalling 67327.
It's difficult to put numbers on what has been shipped in the 5 scheduled services but let's assume it was the capacity of one large ship in total ie 7500.
The total RT value of the shipments so far this quarter is in the region of 37000 which means we have at least another 4 ships to come to just equal the Q2 figures and remember those Q2 figures were Model 3 alone.

The final shipment cut-off date for Q3 from Shanghai to Europe/UK will probably be around 21 Aug which means in the next 3 weeks we are looking for a minimum of 4 big ships and possibly as many as 6. That's a big ask.
Last edited: Aug 1, 2021
Reactions: Erol, moodel_tree, RazorCH3 and 2 others
•••
L

Am I correct in assuming that if you have received the text from Tesla saying you have been allocated a car, it is already in transit rather than waiting at the pier/factory?
•••
W

Lonewulf45 said:
So, I've got my VIN, is there any way to see what ship it is on?
Click to expand...

Llangwm1 said:
Am I correct in assuming that if you have received the text from Tesla saying you have been allocated a car, it is already in transit rather than waiting at the pier/factory?
Click to expand...

Livorno port is quite small, I see Asteria Leader left and probably Hoegh Target was waiting for it to leave to take its place.
•••
R

I would just like to thank Mr Miserable and all the others for putting in such effort with this thread, it has made me sign up to this forum in all honesty just to make this comment.
I am well and truly fascinated by the levels of effort that has been put in to locate peoples soon to be vehicles.
Keep up the fantastic work and I'll keep lurking in the background reading the updates

GLOVIS SUPERIOR has now passed Gibraltar and so is now in the North Atlantic.
The weather for the remainder of her voyage is looking fine and she has updated her ETA for Brixham to 1800 on 5 Aug.
This means that she is likely to arrive in Zeebrugge on 6 Aug.
•••
H

@havaci could you share the link to the Norwegian forum?
•••

Voyage 35 relates to HOEGH TARGET which is still due to arrive in Zeebrugge on 8 Aug. Date for HOEGH OSLO is correct too.

Mr Miserable said:
For those in Norway:-

Vehicles bound for Norway are generally crossloaded in Zeebrugge onto ships heading for Drammen.
These are the ships I will be watching for signs of Teslas being unloaded.:

This is the Norwegian M3 forum and that is the order and delivery section. It is quite active and informative. Many people in Norway use that forum. I think that is why eventhough there are tons of Tesla owners in Norway, not many Norwegians are actively contributing in teslamotorsclub. There are some following this forum though, because there is no other Mr. Miserable anywhere else This section made my blacked out and miserable wait for VIN and eventually Tesla quite interesting and fun by following all those shipping movements. It makes me remember the good old days when I used to play that beautiful game Ports of Call back then
Reactions: Fishyscott
••• 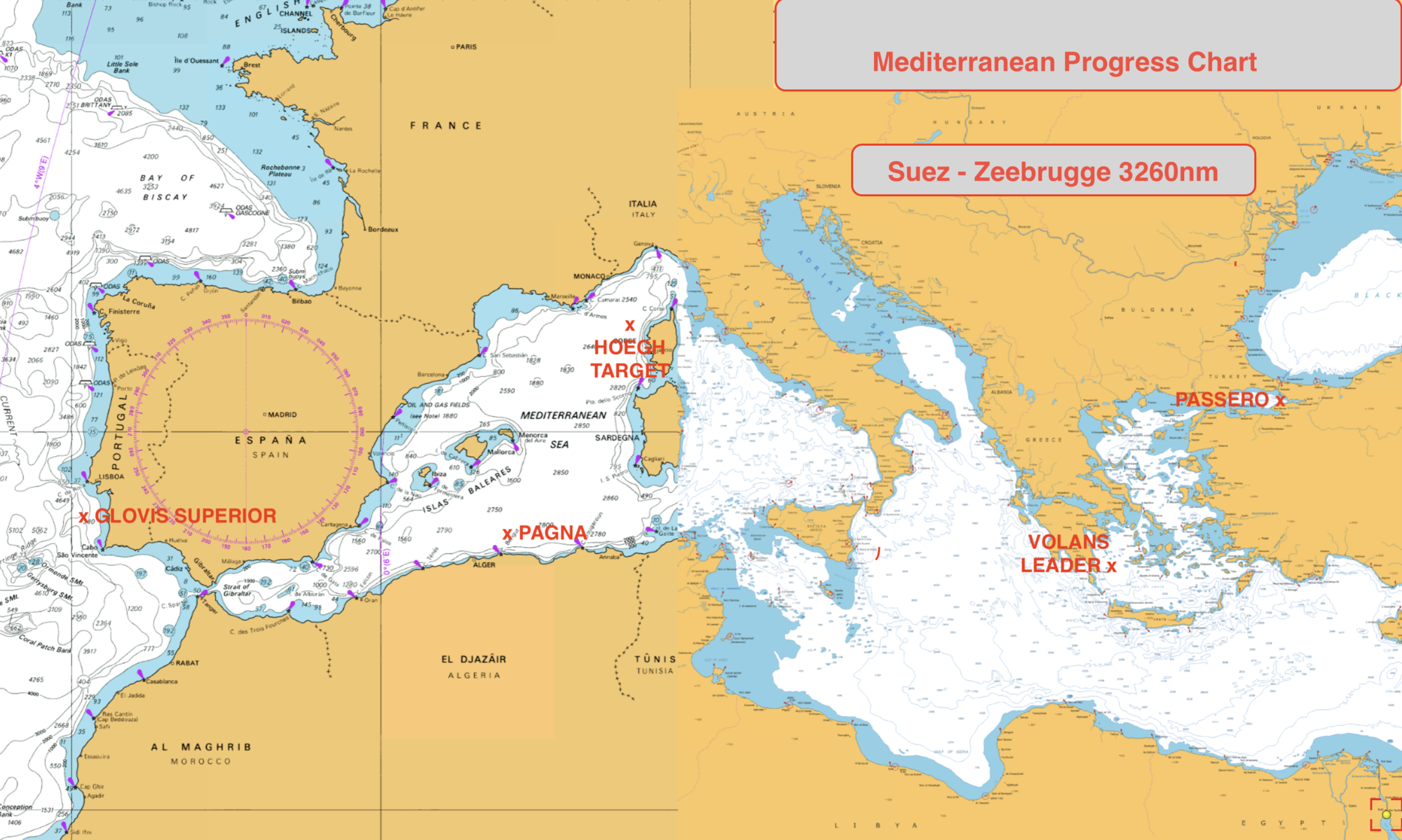 GLOVIS SUPERIOR is racing up the Iberian coast heading initially to Brixham where she plans to arrive off on Thursday evening. This should put her in to Zeebrugge on Friday morning.
PAGNA is plodding along the Algerian coast. She is in no hurry as she is timing her arrival into Bristol for next Monday, 9 Aug and no, she still does not appear on the Bristol port schedule. After Bristol she plans to arrive in Southampton on 13 Aug where she will unload her Tesla cargo.
HOEGH TARGET is now on her way to Zeebrugge where she is due to arrive on Sunday. The Zeebrugge port schedule hasn't been updated for nearly a month now which is very frustrating.
VOLANS LEADER is also now bound for Zeebrugge with an ETA of 11 Aug.
PASSERO should arrive in Derince later today and then, one hopes, head for Zeebrugge too.

HOEGH OSLO is now in the Suez Canal. She should then head off to Misurata in Libya before arriving in Zeebrugge on 16 Aug.
HELIOS RAY is about to enter the Gulf of Suez. I expect her transit the Suez Canal early tomorrow morning and then head to Ashdod, Israel where she is due to arrive tomorrow. After that, I am assuming she will head for Zeebrugge arriving there around 16 Aug.
GLOVIS SUPREME is presently in the Gulf of Aden but will shortly enter the Red Sea. She is due to arrive in Southampton on 15 Aug.
GLOVIS SUMMIT is making good progress across the southern portion of the Bay of Bengal. I'm not expecting her to arrive in Zeebrugge until around 23 Aug.

Over in Shanghai I am aware that GLOVIS COMPANION has departed after spending 36 hours in port. She is heading initially to Singapore however I'm not confident at the moment that she is a Tesla ship. I'll keep an eye on her but I'm not hopeful....
Reactions: moodel_tree
••• 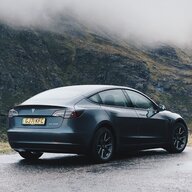 Thank you so much Mr useful for providing us with all this data, I’ts appreciated . Been checking your updates daily and it gives me a lot of understanding into how this all works because tesla went quiet after placing my order, seeing it here makes me feel relieved.
Reactions: moodel_tree, Fishyscott and SteveLR3
•••
T

Hello all, just had a great update for all those MY customers waiting for their arrival. I had the confirmation from Tesla themselves that the name of the ship transporting the MY is the GLOVIS SUPREME. at least this where my car is currently located. Hope this helps you all.
Reactions: Sjoske and MrT3
•••
T

Taylor-88 said:
Hello all, just had a great update for all those MY customers waiting for their arrival. I had the confirmation from Tesla themselves that the name of the ship transporting the MY is the GLOVIS SUPREME. at least this where my car is currently located. Hope this helps you all.
Click to expand...

Also a big shout out to @Mr Miserable. Heaps of info and absolutely amazing commitment to providing these updates. Many thanks for all you do and for keeping all us Tesla fans up to date and maintaining the excitement for our deliveries
Reactions: Fishyscott
•••
R

Just got a collection date for my M3 SR+ from bluewater on 3rd of September any Idea what boat mine would be on?
•••

The UK and Ireland Today at 3:25 AM
Kingpopsy