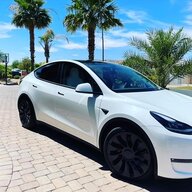 So I've had this issue with my '21 MSLR whereby at random times I'll get into the car to drive, and all of a sudden the screen will reboot. It's totally
random and can happen many times in a day, or not for several days. Along with that I'd have issues whereby Spotify would never resume and
would just "spin" the icon until I say, switched to FM or XM then back to Spotify. I also had issues where my Homelink would "ding" when I approached
my street, but the gate would not open.

Well after keeping track of these reboot times to help out Tesla service, my car was booked in to have the issue fixed. The figured it was a bad
"SD card for the MCU" and would need replacing. Replacing this is time consuming as it's located behind the dashboard and the whole dash
needs to come off.

Well I just got a call from Tesla service, and got an update. Apparently all MCU's for the MSLR are supposed to have 16gb SD cards for the MCU.
Mine for some reason, came with an 8gb card from the factory. Tech was like WTF we've never seen this before and that's the reason
for all this weirdness as the "system would just get overloaded with the smaller card" So needless to say, they're putting in a 16gb card and
hopefully that's all. Weird costly error on their part!
•••

Interesting..the SC called me.. The bigger card didn't fix this issue now they are looking at swapping out the entire MCU...
•••

B
Question about SD card