24 U.S. Cities with a population >100,000 with very limited or no Supercharging and no plans to fix 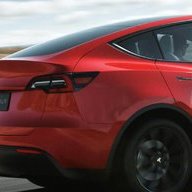 A couple of disclaimers, I did not include California in this for a couple of reasons, they have other issues such as limited capacity but do seem to have most of the >100k cities covered with at least 1 SC or permits to build one with a few exceptions. I looked at cities only, not metropolitan areas but I don’t know how much that would change this. I consider the city as having limited to no SC charging if the closest is >25 miles away as you would be looking at probably a 1-hour round trip drive not counting the time it takes to charge. I live in Denver which is extremely well covered so not trying to push my local area.

I am using the raw data from the fantastic supercharge.info website as of last week and the U.S. Census population estimates for 2019. When I say they have no plans to fix it, I’m only stating what is known publicly based on permits/construction, etc. We have no idea what is being discussed internally of course but considering the time it takes to get a SC built these places will not see a SC anytime soon.

I started looking at this closer when I saw discussion here that Charleston, SC didn’t have a SC which not only has a large population, especially when combined with North Charleston (250,000+), but is also a big destination travel spot. With the Model Y now available, costs coming down for all models I think the Supercharger network is going to become a major issue both in capacity, speed and availability as it doesn’t appear to be keeping pace.

A couple places standout to me, New Orleans is the largest city on this list and to get to the SC 31 miles away you have to go across long bridge to reach it. Lubbock, TX has a population of over 250k and the closest SC is 122 miles away. Texas has 7 cities on this list and by far has the largest volume of truck sales in the country, while Cybertruck may not appeal to most Texans it would makes sense to have the infrastructure in place to support those sales, especially if it ends up being made in Texas. 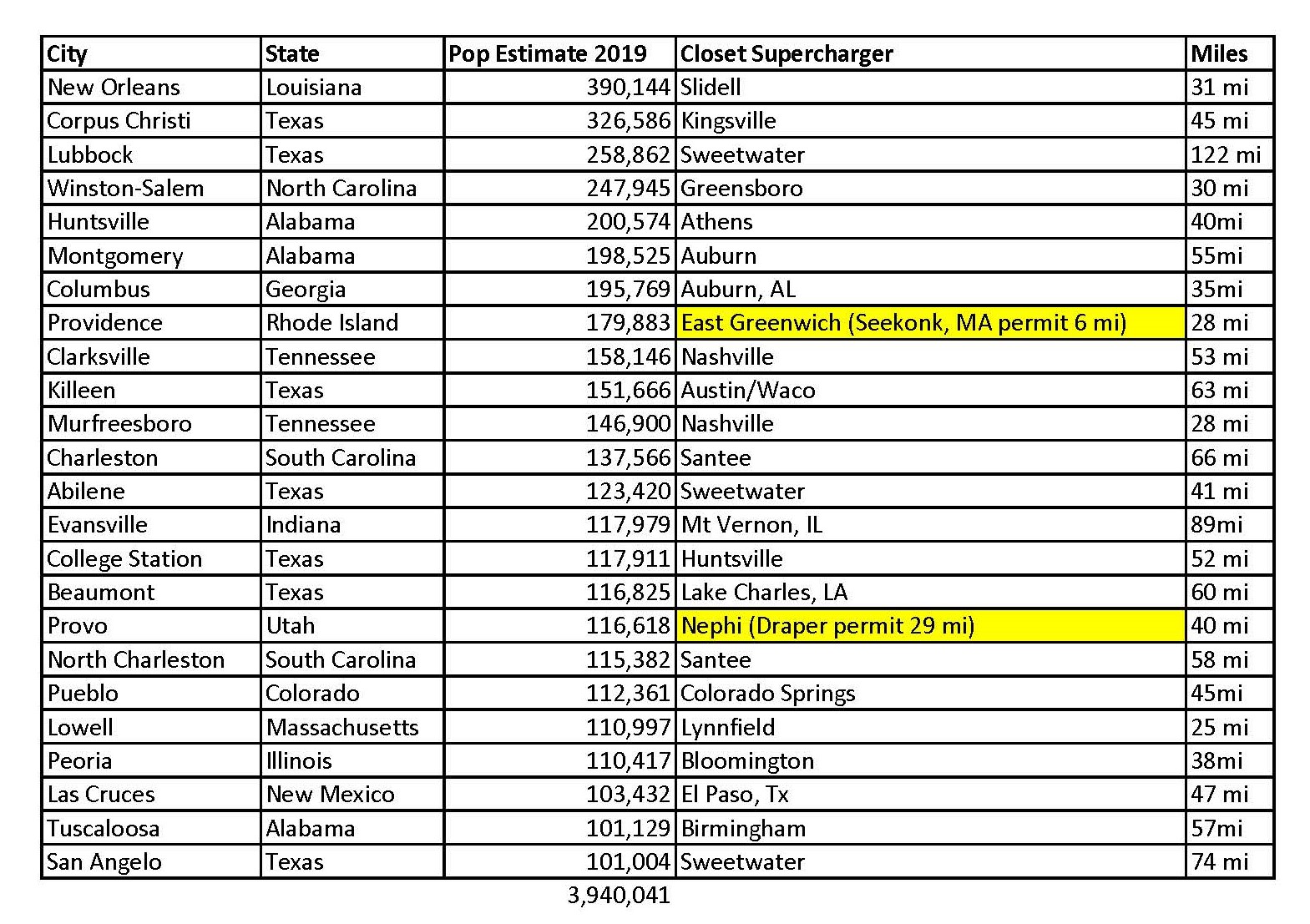 I would love to see a blitz of Supercharging improvements in the U.S. to address not just these 24 cities but also some of the larger interstate gaps, capacity increased in heavily utilized areas and SC’s added to more low population but heavily visited spots such as national parks, ski resort towns, lakes, etc. A big push of 100 new installations over the next year would be amazing, even 50 would be a huge boost.

Please share your thoughts, point out any errors or how you would improve the SC network in the U.S.
Reactions: ItsNotAboutTheMoney, mociaf9, john5520 and 1 other person
T

Sure some if not all of them are on Tesla Supercharger Map indicating coming soon.

thx1139 said:
Sure some if not all of them are on Tesla Supercharger Map indicating coming soon.

Thanks, didn't realize that map included "Coming Soon", thought it was only existing. Will update since some like New Orleans are listed but others are not. Looks like a very aggressive roll out for later this year if it stays on the estimated schedule they have listed.

thx1139 said:
Sure some if not all of them are on Tesla Supercharger Map indicating coming soon.

Here is the updated listed, using the Superchargers listed as Coming Soon from the Tesla website. Drops the cities from 24 to 9, good to know that Tesla is at least planning something for most of them just don't know the details until the permit is pulled. Thanks thx1139. 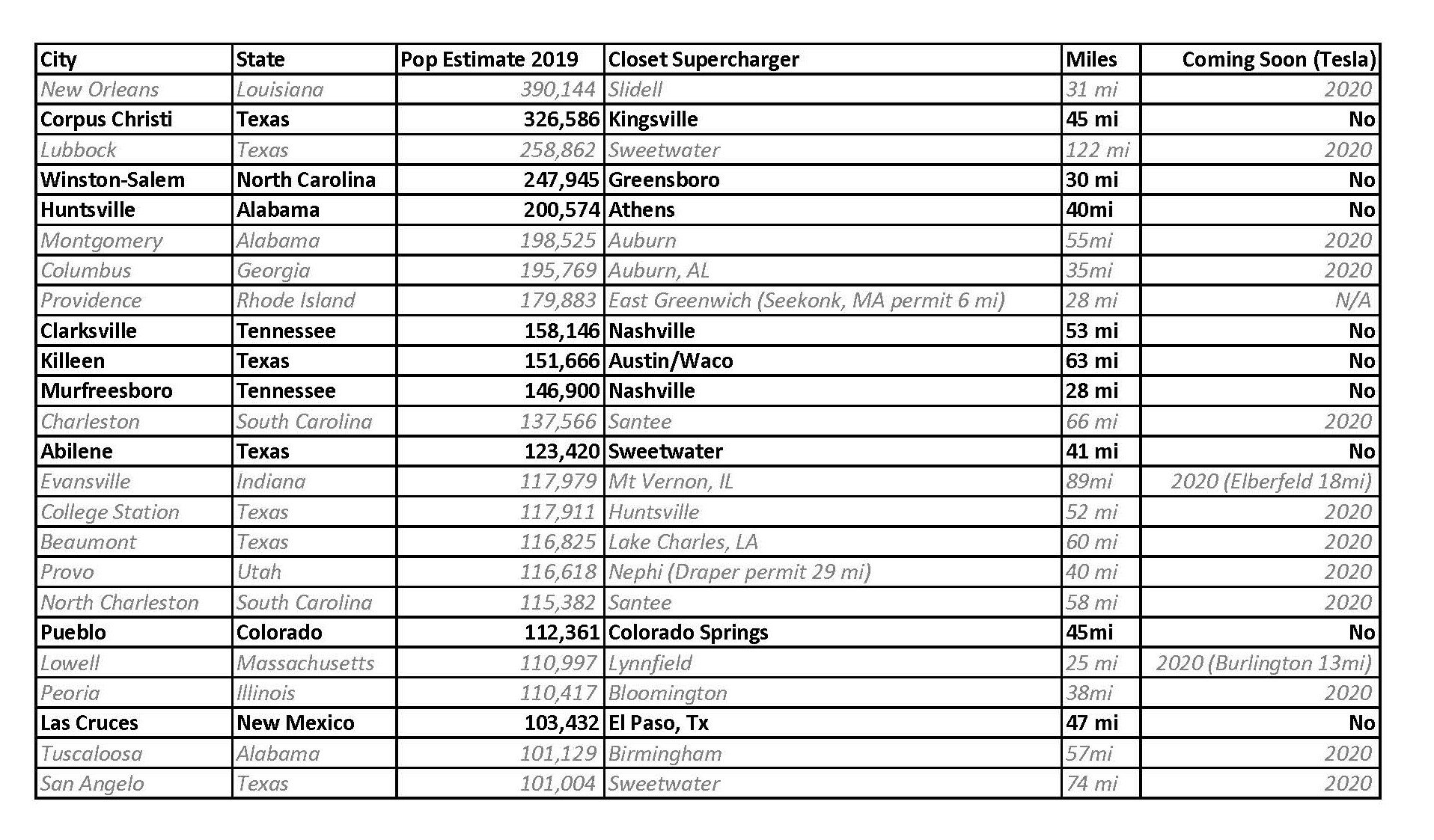 Regarding Abilene, there is a Supercharger 41 miles to the west in Sweetwater and not much further east in Cisco - I can see why it is a no because that would be three superchargers in a 100 mile stretch on the same road. There is no major crossroad in Abilene and I suspect that is the reason for some of the "dry" areas. Exact same reason Killeen,Tx is a no - there are Austin and Waco on both sides. Pueblo, CO is between Trinidad and Colorado Springs...

When you look at this from Tesla's view that Supercharging is for longer highway trips where L2 is insufficient, and that it is best for the health of the battery to home/L2 charge all other times, I think the placement often makes more sense. That being said, Lubbock, Tx needs a supercharger for all the right reasons.
S

The point other have made about crossroads is a great one.

Everyone has heard of Green Bay right? Would you believe city proper is 110k from memory? The stadium is in another connected town. Green Bay doesn't have a supercharger, but Howard another adjoining town does.

A bit further south Oshkosh has supercharging but is only 66k but it also has some big tourist draws and due to water is something of a travel pinch point. 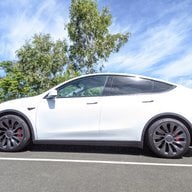 Surprised Honolulu ain't on this list. Although one could argue you'd hit water before you'd need a SC and might as well turn around and head back home.
Reactions: SSedan 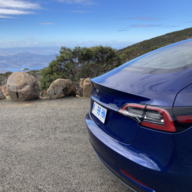 Just in case people didn't know what an underserved city looks like. Most of the ones on that list appear to have one 40-50 miles out of the city.

Yes, some people can't charge at home, but people need to stop jumping straight to "I need a supercharger in my city!" as the very first option. There are 2-3 other options to go through before that. Personally if I couldn't charge at home I'd been moving house before I got an EV, which I know isn't possible in some big US cities, and having a local supercharger is a good workaround in areas where EVs are new, but it's not the ideal long term solution.
Reactions: wwu123 and mociaf9
A

CO_MY said:
Here is the updated listed, using the Superchargers listed as Coming Soon from the Tesla website. Drops the cities from 24 to 9, good to know that Tesla is at least planning something for most of them just don't know the details until the permit is pulled. Thanks thx1139.View attachment 567156
Click to expand...

Welcome to TMC & thanks for the work! But your greenness is showing: many of those “coming soon” sites have been listed for years. We’ve learned not to take timeline promises with a grain of salt but a whole deer lick block.
Another interesting ranking would be the SC sites longest on the “coming soon” list. TransCanada, I-90 & I-94 are great but will I-40 ever be connected?
Reactions: X Fan, KJD and CO_MY

Chuq said:
Yes, some people can't charge at home, but people need to stop jumping straight to "I need a supercharger in my city!" as the very first option. There are 2-3 other options to go through before that. Personally if I couldn't charge at home I'd been moving house before I got an EV, which I know isn't possible in some big US cities, and having a local supercharger is a good workaround in areas where EVs are new, but it's not the ideal long term solution.
Click to expand...

Completely agree with the point that Superchargers should not be looked at as a replacement or option for daily home charging. However, I considered that if a city has a population over 100k people they also attract a lot of visitors for a variety of reasons. A good example of this is Evansville, Indiana which is a place I had never even heard of before looking this over. It's population is only 117k but it is in a very rural part of the U.S. and serves as a hub city for the tri-state area of Illinois-Indiana-Kentucky and this would be the closest city for about 911,000 people. It is also the corporate headquarters for several large companies, large hospitals for the region and 4 different colleges/universities.

A city like this gets a lot of visitors by car, even without any typical tourist attractions just in the fact that it's the only city around for a lot of people.

On a side note: Was in the U.S. Navy and by far the best deployment of my life was to Australia. Spent 27+ days there and visited Townsville, Sydney, Hobart, Adelaide & Perth. Loved all the different ports and people I met for various reasons. Still miss things like XXXX, Toohey's, Cascade, VB, etc.
Reactions: Big Earl