I drove my 2020 LR Y from New England out to Vancouver, BC, Canada to visit family via Dallas, Texas to visit more family. The car is great in the mountains and is a joy to drive. Driving from Redding, CA to the Redwoods is a blast (except for the construction stops). Driving up to Crater Lake, OR at 6 AM is also fun.

Still on original tires, although will need some new ones for this winter. Using T Sportline wheels as 2 of the original rims cracked in the first 6 months. The T Sportline rims have not had any issues in the 18+ months I have been using them.

Total trip was 9,217 miles. Average energy was 282 Wh/mi (not bad considering having to go over the Rockies twice and the speed limits (75 or 80 mph) out west. Cost is hard to calculate as each stop had a different pricing structure plus I did RV car camping The RV parks allowed me to sleep and charge my car overnight. The RV site price was around $40-45/night (inclusive) and didn't have to worry about indoor air quality during a pandemic. I used the mobile charger that I received when I purchased the car, with the NEMA 14-50 adapter which I had purchased. At home I have a 240v/50A circuit with a 14-50, so I was comfortable with that. I also have turned down the charging amps from 40A (80% of 50A), down to 32A which is 8 kWh (to match my max solar panel output). I now understand that having a 240V/30A circuit at home would have worked just as well.

The car performed admirably. I do have FSD Beta and used it and like it a lot. It is not perfect but really helps on long trips. The phantom braking occurred many times over the 12+ days of driving and that managed to irk me enough to get the blood pumping and me fully alert for a while. The car and I had several chats about this… ok more like monologues. FSD has a desire to drive in the left lanes in the early mornings which also produced some conversations. Phantom braking/slowdowns also seem to happen early morning when driving through rolling hills as you crest the hill; it slows down until it can determine things are clear. I am not sure if that is incorrect behavior or not as the AI (and you) can’t see what is over the horizon. Humans will just make the assumption that things are clear, but…

The Auto headlights were ok but, since we still need the driver in the loop, if the driver indicates wanting high (or low) beams, that should take priority. Instead I spent many early mornings fighting with the AI. Can’t drive in FSD without it going full Auto. Same things for wipers. The driver should have the last line of command and control, not the AI. They should also read the driver’s input for lights and wipers as indications that you are actively engaged with the car and your hands are on the steering wheel. The nag timer is frustrating on long, long straight roads (such as the salt flats in Nevada).

A rock chip cracked the windshield in Seattle. The crack quickly spread halfway across the windshield. Luckily Tesla in Vancouver has a great service center and they squeezed me in, so I had the car fixed within just a couple of days. Vancouver has a big Tesla population. It seemed like every 8 or 10 cars was a Tesla. As I was used to seeing 4 or 5 a day, seeing that many surprised me a wee bit. It was nice to see that many Teslas.

I stayed at RV parks out and back. Camp mode is wonderful. The RV parks mostly didn’t have any issues with me reserving a 50A site once they understood it was a Tesla. I had more issues with sites accepting car camping than EV charging. I learned that 30A charging is a bit more complex. Some sites use a TT-30 plug and others use the NEMA 14-30 plug. Not sure of the difference. Had 2 issues while charging overnight. In Nevada, when the day time temp was 99 when I arrived at 5PM, the charger hit a thermal limit after about 1.5 hours and shut down. I unplugged and waited about 30 minutes with the unit in the car (A/C was on) and then plugged in again, but lowered the charge rate down to 24A (6 kWh). That seems to have worked as I was charged the next morning. Had a similar issue in North Dakota. Again the temperature was upper 90’s. Same action produces the similar result.

Overall, very happy with how well the car performed.

You actually can disable auto headlights. Just push forward on the stalk.
•••
B

I enjoyed reading about your trip. Any suggestions for making car camping easy and comfortable?
••• 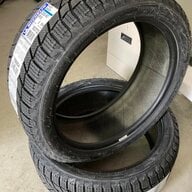 EVSEAdapters has a TT-30 adapter that plugs into the Tesla UMC. Very useful for campsites and surprising Tesla doesn't make one themselves.
Reactions: Big Earl, Johnny Vector and DrGriz
•••
C

Sounds like a great trip, I like the idea of car camping with the charging included. Great alternative to hotels and give better control of the route you take when you dont have to worry about charging.
•••
N

Just got these from Tesla and Amazon:

Use a variety of household outlets to charge your Tesla with a Gen 2 NEMA Adapter. Simply attach the appropriate adapter to your Mobile Connector, plug into the corresponding outlet and begin charging. Adapter Max Distance Gained Per Hour of Charge Model S Model 3 Model X Model Y 5-15 3...

For car camping, Camp mode is great. Camp mode (and Dog mode) only work when battery is above 20%, so if you arrive with less than 15%, it may be a while before you can use those. However, the A/C will still work if you are sitting in the car (or have some weight (luggage) on the front seat).
Packing light enough to use the frunk for most of your storage and you'll have a lot of room in back. Don't forget the underfloor storage in the back.
Get a nice mattress. I have an Exped MegaMat, which has foam (for insulation and comfort) and is also inflatable. Doesn't take up a lot of space when deflated and is light weight for storage and easy packing. I also moved the front seats forward to create a bit more room in the back once at the site.
Make sure the RV site isn't too far from a SC, just in case.

Need to figure out how to get some privacy and to also block out the security lights they have on. I have an aluminet cloth that I use to block out the sun when parked. That works really well and can be shut in the doors to "tie" it down.
If you can get a layout of the RV site, you can sometimes choose your spots. You'll want to not have to walk a long way to use the bathrooms but not be too close as well. The other campers were usually very friendly. You can meet some nice folks.
I found that this site was fairly good at picking a decent site:

RV LIFE Campground Reviews is the trusted source of RV Park and Campground reviews from campers just like you. Search 20,000 campgrounds & RV parks across the USA, Canada & Mexico.

campgrounds.rvlife.com
There is another called Passport America, but most of those sites was further away from where I was traveling. Of course there are a bunch of KOA and other membership type of sites.
Reactions: zoomer0056 and boulder.dude
•••
B

Thanks for the mattress suggestion. I tend to keep gear simple and minimum. Sounds like you have same philosophy.
•••