A solution to mystery squeak while driving 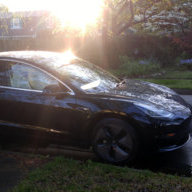 Shortly after adopting my Model 3, I started hearing a squeaking sound. It seemed to be coming from the dash or center console, but I couldn't pin it down or reproduce it on cue. Just whenever driving it would appear for a while and then go away for a while, though it was worse on bumpy roads. Then it got really bad and I took it into service center.

They noticed it was mysteriously worse when I turned the car to the right. They looked into it and found that the posts attaching the seat to the floor were slightly off center and so were rubbing against the metal of the holes they went into. They unbolted, re-seated it (literally) so that each post was centered in its hole, and then tightenened them back down. No more squeaks. Thank you, Carlos from Tesla!!!

In case anyone has this problem and goes searching for it, this is what it was for me. Hope it helps someone.
•••

My disaster of a delivery experience (No quality control)