About to purchase first Tesla !?! 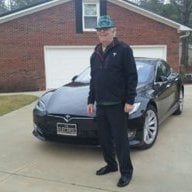 Greg63 said:
I went back to Tesla today and he looked through the history. It's had regular maintenance performed at Tesla and the person I was talking to knew the previous owner. It has the original door handles, battery, MCU and screen. The motor was replaced in April of 2016. The sunroof was fixed a couple of times and there are some water stains on the pillar. I put new tires on it today and that noise that I thought was possibly a bad tire turned out to be right. Also had Discount Tire replace the sensors on all 4 wheels and I still have the fault warning.

I'm thinking maybe it might be a good idea to upgrade the MCU since it's eventually going to go bad. I know a recall is coming but everyone is praising the upgrade with the exception of the backup camera at night. Tesla repaired the driver door handle and all handles are working fine so I'll wait on updating them.

I didn't want to mention price because people would probably swear that there has to be something wrong. With 19 months left on the warranty I don't think it's that big a risk. This car has been driven 150k and had very little done to it. I drive maybe 6k/year so this car should last me a long time if I want it to. It looks fantastic for it's age and miles! Battery still charges to 237 miles at 100%. I know I won't get that many miles but it's only 10.5% off of its rating when it was new. With the new tires and an upgraded MCU (with new screen) I'll still have less than $20k in the car. So you can see my risk is very low and I got the car I've wanted for a long time!!! I also like that it's the one with the bigger frunk. I feel like a little kid and it's fun to feel like this. I HAVE A MODEL S and it still looks great!

BTW, if the price wasn't right I would have waited til I could get at least a 2015 model S.
Click to expand...

You got a great deal
G

Ok it goes in for the MCU upgrade in a little over a week. My estimate states $2500 but turns out to be great timing with the price drop! My passenger front handle is starting to act up so I should probably add that to my upgrade appointment. Is there anyway to get someone from my SC on the phone? I want to see what they would charge me for the TPMS upgrade if I already have 433Mhz sensors in the wheels.
M

Don't upgrade. With the recent NHTSA investigation, Tesla will have to recall all MCU1.
G

Mead80 said:
Don't upgrade. With the recent NHTSA investigation, Tesla will have to recall all MCU1.
Click to expand...

I would upgrade even if there wasn’t a recall. At $1500 it’s a no brained as far as I’m concerned.

I think what he’s saying is don’t pay for an upgrade right now as Tesla May be forced to upgrade it for free in the future.
G

AMPd said:
I think what he’s saying is don’t pay for an upgrade right now as Tesla May be forced to upgrade it for free in the future.
Click to expand...

If Tesla is forced to upgrade the MCU to MCU2 then they’ll also be forced to reimburse those that have paid for the upgrade. If they’re only required replace with an updated MCU (larger chip) then I’d rather have the MCU2 Even if I have to pay for it.
G

Update:
Had both the MCU and TMPS upgraded. MCU2 backup camera at night is fine. Sound system is fine. The IC is a little dimmer than the main screen. I can actually use the browser now! Having video is nice while waiting for my wife at the store. Where it seemed she use to take forever in the store now it seems too short!

When I first got the car the wipers worked very well. However, since getting the windshield and MCU replaced they are terrible. Much of the time it doesn't sense the rain and I have to manually force the wipers to work. I'm thinking it must have something to do with the windshield replacement. It was replaced by Safelite but they installed a Tesla windshield.