Have a model X. Got it in the fall so no big AC demand. First summer no AC. Roving service tech came by, recharged the AC. Said it was the first time he has seen the factory not charge a system before delivery. Just in case he made us an appointment at the Vienna, VA Service Center. After a month we could tell the AC was starting to put out less air. Kept the appointment and was told that nothing was wrong with the AC. Here comes this summer. NO AC. No difference in the air coming from the vents with AC on or off. Inside the cabin is generally 10-15 degrees warmer than the ambient air temp. Called service center again. Transferred to the central service center. Was told that Tesla would be contacting me in the next 3 days!!!!!!!! Love the car (except for the AC), was even planning to plunk down the cash for the new roadster. Given the current competency of the service centers I would have to say if you get a Tesla without any bugs you will love it. If there are any issues - not so much. Needless to say, no roadster.
••• 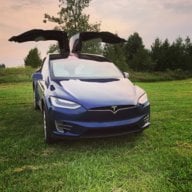 Yep my car had the AC fluids leak 3 times due to faulty “O-Rings” that had to be replaced each time...my SC actually said it’s a common problem and they actually updated the firmware to show if the issue is occurring
•••