Autonomous driving can be split into two kinds of task:

Action: driving policy (i.e. making high-level decisions like whether to overtake a slow car) and path planning (i.e. the exact trajectory and speed of a car).

Supervised learning is universally used for camera-based perception. Historically, action has been handled by traditional, hand-coded software, not neural networks or machine learning. But increasingly it seems like engineers are talking about using machine learning to solve the action part of the problem.

As far as I know, there are just two machine learning approaches to action:
One form of imitation learning, called “behavioural cloning”, is just supervised learning applied to action. A neural network learns to map actions taken by humans to the environmental cues that prompt those actions (e.g. maps stopping to stop signs).

What follows is strictly my own opinion.

We can boil down competitive advantage in machine learning into three main things: algorithms, compute, and data. Andrej Karpathy, among other experts, have identified these three things as fundamental inputs to AI progress:


“I broadly like to think about four separate factors that hold back AI:​
(In discussing competition between autonomous vehicle companies, I’ll ignore infrastructure since it doesn’t seem relevant — these things seem to be either open source or commoditized.)

If imitation learning turns out to be the solution to action for autonomous vehicles, then I believe algorithms and training data will be what gives companies a competitive advantage.

Similar to supervised learning for perception, the performance of imitation learning will be a function of the neural network architecture and the training dataset.

If reinforcement learning turns out to be the solution, then I believe algorithms and possibly compute will be what gives companies a competitive advantage.

Reinforcement learning (RL) will most likely take place in simulation. It will depend on RL algorithms that can learn to drive in a simulator, and transfer that learning to the real world. Since simulation and training is computationally intensive, computing resources may confer a competitive advantage.

In a scenario where imitation learning turns out to be the right solution, I predict Tesla will be in the best competitive position.

As I understand it, the operative metric for training data is the number of unique examples for each semantic class. In image classification, a semantic class would be an image type like images of great white sharks. In imitation learning, a semantic class would seem to be (this is my own guess) pairings of actions and environmental cues. If some environmental cues are incredibly rare — such as the conditions that lead to a deadly accident on average every 100 million miles — then it would take an incredibly large amount of data to collect a significant number of examples for each semantic class.

Drago Anguelov, Waymo’s head of research, recently said that Waymo doesn’t have the ability to collect data on the rare corner cases that form the “long tail” of human driving behaviour: 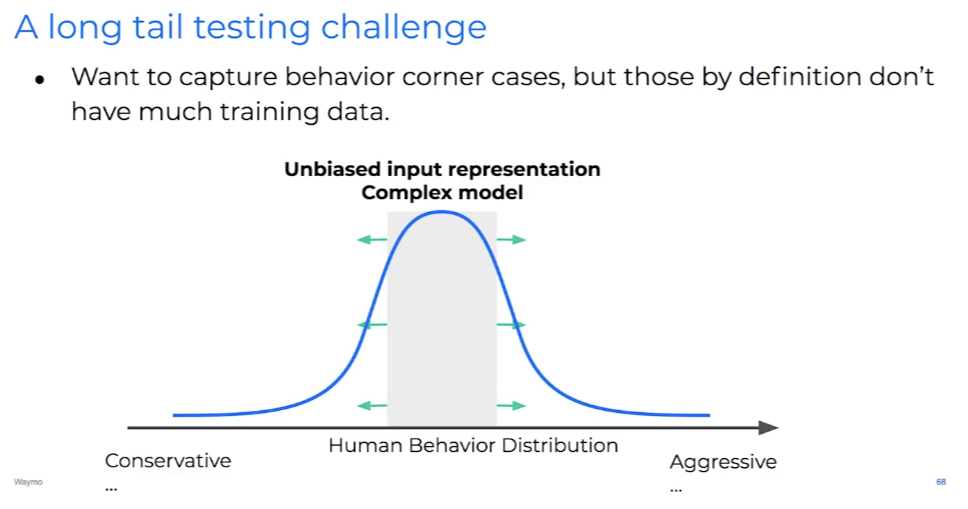 This suggests the scale of data needed to capture long tail events is not millions of miles, but perhaps billions of miles. For example, to capture 1,000 examples of deadly crashes, you would need 100 billion miles of data.

As far as I know, no other company yet has the ability to collect the data Tesla can collect at the scale of billions of miles.

Even if other companies have superior algorithms for imitation learning, it doesn’t matter if they have no long tail data to train them on.

In a scenario where reinforcement learning turns out to be the right solution, I predict Waymo will be in the best competitive position.

DeepMind and Google are under the Alphabet umbrella with Waymo. Taken together, DeepMind and Google seem to have the highest number of world-class RL researchers and engineers of any company. This makes me think that, assuming Waymo can fully tap into this expertise, it is the best positioned to develop and apply RL algorithms for autonomous driving.

Google also has massive compute, which could turn out to be an advantage.

Competitive advantage in a hybrid approach

What if imitation learning is required to bootstrap reinforcement learning? This is an idea suggested by two researchers at Waymo:


“...extensive simulations of highly interactive or rare situations may be performed, accompanied by a tuning of the driving policy using reinforcement learning (RL). However, doing RL requires that we accurately model the real-world behavior of other agents in the environment, including other vehicles, pedestrians, and cyclists. For this reason, we focus on a purely supervised learning approach in the present work, keeping in mind that our model can be used to create naturally-behaving “smart-agents” for bootstrapping RL.”
​
In this case, it depends on how much training data is needed for imitation learning to bootstrap RL. If it’s on the scale of millions of miles, then Waymo is in the best competitive position. If it’s on the scale of billions of miles, then Tesla is in the best competitive position.

It’s possible that Tesla will lose its favourite position if another company gains or disclosed the ability to collect the same kind of data at a greater scale. Mobileye, for instance, collects some data at a large scale, but the details aren’t clear. The stated aim is compiling HD maps and not imitation learning, although that doesn’t necessarily preclude the data from being used for both purposes. A forward-thinking car manufacturer could copy Tesla’s approach and equip its cars with the hardware, software, and wifi connectivity to upload data for imitation learning.

To date, it feels to me like there has been little in the way of principled theories of autonomous vehicle competition. The discourse seems to largely revolve around demos, which convey basically no information about a system’s reliability over millions of miles, and the rate of safety-critical disengagements in California, which is a misleading metric.
Last edited: Mar 21, 2019
Reactions: OPRCE, jimmy_d and heltok

Some common mistakes in analysis (a few of which I’ve made):
That’s why it’s important to me that the above mental model doesn’t rely on:

It seems to me that the essential difference between applying RL to driving versus other activities like Dota is the challenge of representing the driving task in simulation. How do you make sure what the agent learns is driving, and not a video game that closely resembles driving, but not closely enough?

With supervised learning, at least you don't have that problem, because the data comes from the real world. The problem you do have is getting the neural network to learn all the correct mappings between action and state.

If you capture state-action pairs from long tail scenarios, in theory, the neural network should be able to learn the correct mappings.

What are the odds that policies learned outside of the long tail, in the chunky middle, will generalize to the long tail?
Reactions: OPRCE