Any record of which VIN were test-driven in Bellevue before production? 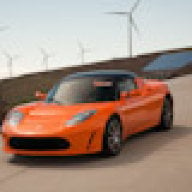 I fondly recall signing up for a test-drive of a Tesla Roadster in Bellevue. This was held in the parking lot of a Sears store that had been closed for some time. I didn't know anything about VP or other VIN numbering schemes at the time, but now I'm wondering whether anyone has a record of which car(s) Tesla brought to Bellevue. These test drives were available only to folks who had put the $60,000 down payment on a Roadster, but you were allowed to invite a guest (which I did, of course). As far as I recall, this was before any of the Roadster 1.5 models shipped. I assume that it was a validation prototype, but I really don't know. Does anyone know?

If it was silver, good chance it was VP 10. That's the one that I drove as one of the first Signature 100 member drive opportunities in the hills near Tesla HQ on August 27, 2007.
Z

slcasner said:
If it was silver, good chance it was VP 10. That's the one that I drove as one of the first Signature 100 member drive opportunities in the hills near Tesla HQ on August 27, 2007.
Click to expand...

VP 11 was definitely there that day (Thunder Gray). I can't recall if there was a second car. There was a different car planned but it had an issue on the way up North. It was a long couple of days for the team transporting the car.
Reactions: S-2000 Roadster
Z

btw - That car had a functioning 2-speed transmission, which was lots of fun and one of the few times "the public" got to experience the car that way.

by the time I got in the car, the 2-speed was locked into low. I recall them suggesting that I not change gears because it might not go back.
Thunder Gray seems right. I recall it wasn't bright.
I was one of the last test drivers, and I convinced them to let me take my Honda S2000 around the track after everyone was done. Very different without the traction control of the Tesla!
Reactions: im4uttx

Anybody remember the date? I could possibly find out if I haven't deleted the emails from that time.

Xconomy: Test Driving the Tesla Roadster, and Glimpsing the Future of Electric Cars

The idea of electric vehicles is in the crisp Northwest air these days---and the vehicles are on the road. Earlier this week, we reported that

xconomy.com
This confirms my recollection that there was no shifting. But the gear shift was visible, so I don't know why the author says "no stick shift" - maybe he meant the verb sense, not the noun sense, of that phrase.
Reactions: Zak