Is there an option to have designs show up in the tint? Like maybe a "Saint Elon w/the Heavens Opening Above"?
•••
B

NigelM said:
OK, heard back that I have permission to talk about it in a limited way and no photos of the windows themselves....

Yes it works, and it seems to be an adaptation of the Daimler concept. The windows had to be replaced and Tesla installed various sensors inside the car to measure temperature and UV ingress; I have no idea what it all costs but I'm told that after the test they will remove the sensors and I get to keep the windows, in return I do have to keep a weather log for a couple of months (oh the hardship! :wink

The magic sky windows operate on a slider bar on the touch screen so you can adjust settings to your personal preference depending on light/sun conditions. The software shows it as an extra tab and it's not all finalized yet, it looks like the pano roof slider but doesn't show a side picture of the car yet. I'm waiting on approval to show a photo of the touch screen.

And yes, I believe there are a couple of other folks beta testing it in hot climates.
Click to expand...

When you say windows, can you be any more specific what windows this would operate on? It it just the panoramic roof, or are we talking all the windows in the car? This would be sweet to have as a retro-fit upgrade. I'd be willing to pay quite a bit for this...
•••
Y

and I just spent a bunch of money for 3M crystalline.... damn!! I definite want these smart magic sky windows! Is this going to apply to all windows, just rear window, side windows? or just pano?
•••

Side and rear windows. The pano roof doesn't change. The darkest setting is about equal to a 20% window tint, so basically looks the same as the pano.
•••
R

Fantastic idea. Love it... except that now I can't go out and tint my Model S windows for the next N months until this gets announced.

Definitely want it. I can also help with beta testing in Florida!
•••

I just got a message from someone claiming to work for Tesla.
They said that the Big Announcement Tomorrow will be that all Model S already have this feature, and it will just be enabled on all cars via the next firmware update. Win win!
•••

Sweet, but am I the only one cringing at the parking job? That car is going to lower and crunch the heck outta the front bumper.


TEG said:
I just got a message from someone claiming to work for Tesla.
They said that the Big Announcement Tomorrow will be that all Model S already have this feature, and it will just be enabled on all cars via the next firmware update. Win win!
Click to expand...

How's that putting money where the mouth is though? Also, then that means all Nigel got was a SW update and the temporary sensors. I'm hoping no April foolery

This looks like the same picture as the "Friday" picture. The red VW looks to have been pshopped green (a color I've never seen on a VW actually). If you look close enough, the red car's reflection can be seen in the reflection of the Model S. The lip of the car is over the curb the same amount of distance as well.

The least believable part IMO was TEG (of all people) not being able to find the obvious keyword in the name on the side.
•••

JoshG said:
so then the question becomes why the heck would they plaster the name of this in-testing feature all over the door sills of the test vehicle? Seems crazy to advertise that they're testing it.
Click to expand...

It's probably branded for display at a trade show. Maybe it will be at Teslive?
•••

I resisted the urge to post "shopped" to let it play out.

The pinkish/purplish glow of the red reflection is too hard to get rid of... if it had only been parked next to a more neutral color, you might have gotten away with it.

Then, the fact that a car manufacturer would put a project name on the side of a car is unthinkable. I know there was lettering on the Model S prototypes and betas, but that was well after things had been unwrapped a bit. Not to mention the distortion and skew of the font as applied to the picture don't match the distortion applied to the whole photograph.


Banahogg said:
The least believable part IMO was TEG (of all people) not being able to find the obvious keyword in the name on the side.
Click to expand...

Looks like the cat not only got out of the bag, but the beans got spilled too.
•••

TEG said:
Looks like the cat not only got out of the bag, but the beans got spilled too.
Click to expand...

As long as the cat doesn't eat too many of the beans. That would put Tesla out of business. I've heard a few central European republics are experimenting with pet flatulence as a means of propulsion. The "KATGO" was going to be released later this year.
••• 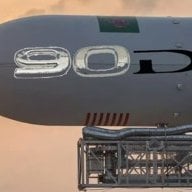 I should have known when the time stamp for the original message was 11:59PM last night. Oops?

That Model S has the SAE Combo and CHAdeMO adapters too.
•••
J

Stoneymonster said:
I hate all of you
Click to expand...

seriously - was on board with this one....

Doesn't Benz have this on their new convertibles? It's actually pretty believable. Paging Elon - make this "joke" happen?
•••

TEG said:
Looks like the cat not only got out of the bag, but the beans got spilled too.
Click to expand...

What am I going to do with all these meat thermometers I bought for the next photo?
•••