So I've noticed this since Navigate on Autopilot was enabled in Australia many years ago. With NoA enabled, sometimes when the car is entering a motorway/freeway or near a on/off ramp/exit it starts indicating even though there is no lane change required.

It seems to be getting crazier, yesterday while entering the M4 from Concord Rd heading towards Parramatta. I enabled Autopilot (no NoA) and it started indicating left. In this situation there was no need to indicate at all and even if it thought I had to merge it should be indicating right. There was also no way to turn off the signal, hitting the stalk did nothing I had to disengage Autopilot to stop the signalling.

This is probably down to the RHD market being an after thought for Tesla. Any others experienced this? Or just a me problem?
•••
T

I've had this for ages. NoA has been absolute *sugar* for a while now. If I engage autopilot on any onramp it signals left.
••• 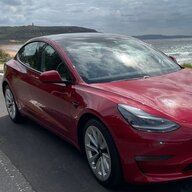 dasn said:
Any others experienced this? Or just a me problem?
Click to expand...

Yes, happens to me too when taking a couple of different exits on the (Sydney) M2 motorway. I have EAP but I don't think it matters whether I have NoA enabled or just using normal Autopilot.
•••
Q

It's getting sucky maps data. When a 'road' ends (i.e. when its name changes) and there's some merge involved, it indicates onto the next road. Google Maps treats on-ramps as separate roads with separate names, that start and end mid-way through interchanges. The Glenloch Interchange in Canberra, westbound from West Belconnen towards Civic, is just awful. If you zoom in on any map, every single ramp through the interchange is its own separately named road, and some names change multiple times.
Reactions: Ted H
•••

Ted H said:
Yes, happens to me too when taking a couple of different exits on the (Sydney) M2 motorway. I have EAP but I don't think it matters whether I have NoA enabled or just using normal Autopilot.
Click to expand...

well it happens up here in America too.
Reactions: QBN_PC and Hairyman
•••
D

The most problematic part about this erroneous signalling is that it happens even when NoA is deactivated =/
Reactions: Ted H and OzVic
•••

G
Warning: You can get FSD beta strike for any forced disengagement, even with FSD beta disabled in settings...