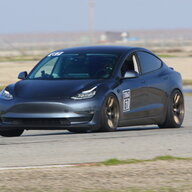 Attended the Alfa Romeo club's advanced time-trial school over the weekend at the Streets of Willow. The instructors and events were great & we got tons of track time. Charging was more of an issue than I was hoping it would be, but I was able to make it work.

(caution - the video is crazy shaky)

One of the things I like about AROSC is that they conduct races and time-trials with a classing system, similar to NASA or SCCA. (Weight to HP ratio adjusted for modifications) My RWD Model 3 with UP lowering springs, 9.5 in wheels, 200 TW 265/35 tires, MPP Front Rotors and PartyBox VSC defeat qualifies for the P class. This is fun because cars in this class range from low weight/low HP cars like some Miata, S2000, Porsche SC, and AR Junior, to heavier cars like the Mustang GT and the RWD Tesla.

The 2 day course contained three main activities: Track, Classroom, and Skidpad. (Each activity was conducted in two 1-hour sessions per day, one in the morning and the other in the afternoon. The track sessions included about 50 minutes of actual on-track time and the Skid-Pad had about 40 minutes driving time - (manage that battery carefully!)

Track:
Fairly early in the session I did get to share the track with one of the class P leaders in his 1982 Porsche 911 SC. I had gone up against him in the past at Big Willow, where he beat my time by over 4 seconds, so it was fun to hang with him on this twisty short track.

This was my first time on track with the upgraded 365mm front rotors and track pads from Mountain Pass Performance, and they were were solid performers. Maybe too good, as I experienced no fade at all in my first session until I boiled my brake fluid (Motul RBF600) after about 40 minutes on track in the 100+ degree heat. Because the school uses only about a quarter of the track for the lapping portion, you are constantly braking and turning. As I hit pit lane to let the fluid recover, I was not surprised to pull up next a (literally) smoking hot Camaro with the same issue.

Classroom:
Being the advanced time-trail group, they covered the fundamentals fairly quickly (anatomy of a corner, driving line, slow in-fast out) and focused more on key strategies for getting a hot lap in. They also provided advice on how many of the approaches used in wheel-to-wheel racing apply to time trial, especially helpful for open passing groups. During one of the on-track exercises, they had us pair up and go around the entire course (except for the last chicane) two-wide. We'd alternate taking the inside and outside each lap. Then the next challenge was to get comfortable enough being two-wide that you could catch the pair in front of you. Again, this is all on what basically amounts to a go-cart track. Too Fun!

SkidPad:
Unlike traditional skid-pad work where you stay in the circle or do figure 8s, this was a super-mini-course attached to the skid pad. I was actually hoping this would be more of an opportunity to do a bit of drifting, especially since i have the PartyBox installed, but they wanted us to focus on finding the fastest line while incorporating the skid pad. We did runs both clockwise and CCW, and ran with the skidpad dry as well as wet. Still, the advantage of the PartyBox here and on the "larger" track was obvious. So much easier to get through those tight turns when given a bit of latitude! I can only imagine how fun this would be in a Performance 3 with Track Mode.

Notes for Charging at Willow Springs:

They do have RV spots with 50 amp power at Willow Springs Raceway, but only two of the 10 or so sites have 14-50 plugs and you have to ask for them specifically, which I did. The Super Charger in Mojave is 21 miles away from the track, and it took me 23 minutes each way and used 7% of the battery.

I charged to 100% the night before and stayed at a (terrible) hotel 5 miles from the track. I lost a little charge overnight, so when I got to the RV spot in the morning I was at 87%. I had about an hour and a half before the drivers meeting, so figured I was in good shape. Unfortunately, the owners of the track had happened to leave their RV in the spot I had reserved, and it took a lot of back and forth with the office before I was able to get someone out to unplug their RV and let me plug in, so I was only up to 89% when I had to head to the driver's meeting.

Luckily the track session was first, so 89% was a good SoC. The course is short with very few "straights" so battery held up better than it would on a full course. By the end of the session I was down to the mid-40s. I plugged into the RV spot during the classroom session, which got me to the low-50s before the skidpad. After the skidpad I was at 27% with only a 1-hour lunch period before the next tack session. 23 minutes later I pull into the SC at 20%. It was hitting 150kw and got me up to 70% in just over 15 minutes (enough time to grab waters and a sandwich). 23 minutes back and I arrived just in time for the afternoon track session at 64%. This was the wheel-to-wheel portion, running a bit slower pace, and I got out with 30% remaining. Plugged in during the classroom session and started the skidpad at 37%. That took it down to 14% before ending the day. Considered sitting at the RV spot for a while, but ended up heading straight for the SC and made it there with 7% to spare. Can't wait until all tracks have Super Charging capabilities!

Overall the event was a crazy in an EV - But so much fun!
Reactions: jjrandorin, destructure00, mcbarnet007 and 4 others
•••

Chasing down a BMW M3:

Reactions: beastmode13 and Phlier
•••
A

Streets of Willow is fun. I spun my Solstice GXP off the track at the chicane and had to spend 2.5 hours getting dust out of the interior. Super worth it though. I did a 2 day class with some Miata and Lotus folks. The first day was like yours and the second day was all track. I wondered about getting the Model 3 out there and wondered about charging. Thanks for the info.
Reactions: MoreAgain
•••

Tesla on a go-kart track