Hey folks. This is merely one (the first!) of a series of threads where we can discuss the various effects of battery pack balance. This one will be focused on range/capacity fluctuations.

Likely, this is the least important of all such related topics. Thus, this will be the lightest of all those threads, and probably the only one with pictures!

First, this is all merely informational and there is little you can do with this information. It is just information, and isn't significant enough to warrant a change to your charging habits despite any takeaways.

This is the often-cited post regarding pack imbalance, containing an excerpt from a leaked internal document: Battery Management System - What I Learned At Tesla Service Center. I'll draw some conclusions & assumptions from it below, these will probably be discussed elsewhere. But most importantly, we must recognise that any interpretation of those documents may be incorrect (or updates may have changed it).

I will take two meanings for imbalance, though they tell a similar story:
Assumptions:
Theory

Based on a lot of data with my own car, I observed that changes to our charge set-point (e.g. charge to 80% one week, start charging to 90% next week or perhaps 100% for a single day) will result in small changes in estimated capacity.

Further related observation is that on trips, my estimated capacity changes more so than usual. This is partly due to my charging habits temporarily changing a lot. After the trip, my numbers settle back to what they were before within a week.

I therefore speculate that to some degree, along with Assumption #2, the dynamic balance point has a daily influence on true capacity (which is then accurately reported by the BMS as fluctuations in daily range).

I present an exaggerated scenario: A battery pack with 4 series bricks with rather large (but managed) imbalances between them. The graphs below are in terms of energy and not voltage to simply things (and related more to what we see in the car).

When charging to 80%, let's say it aims to have the packs balanced at this point. The length of the bars represent their respective energy capacities, with the lighter top region representing the "top 20%" for that brick. When charged and balanced to 80%, these should all line up as below. 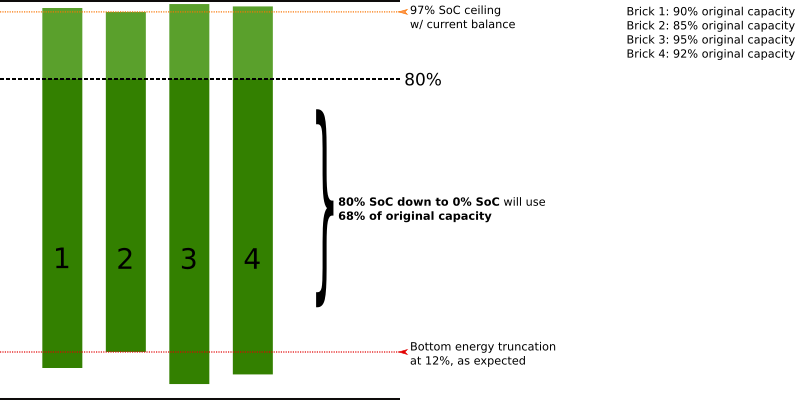 There are a few further things to note here:
But what is limiting the top of the charge? In reality, Brick 2 probably charges faster, and thus limits the top of the charge as well with its imbalance. This is noted above ("97% SoC ceiling"), but I couldn't wrap my head around how to make an accurate visual representation of it, so only that vague (and likely somewhat incorrect) statement is made.

Something interesting happens when we charge and balance at 100% though. 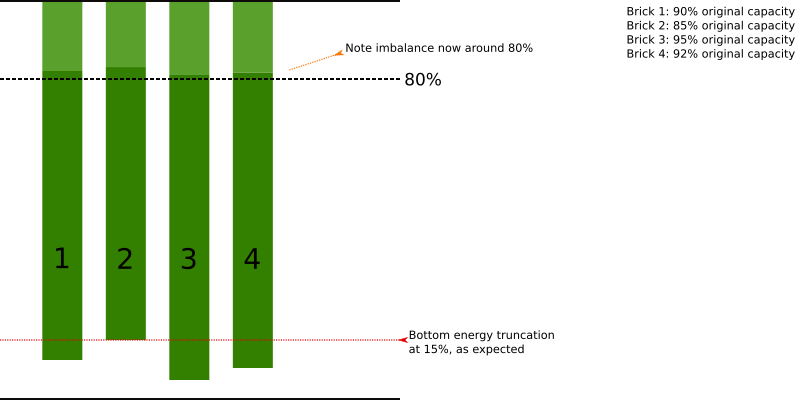 Now, the most interesting thing happens after we balance at 100%, but then start charging to only 80%. 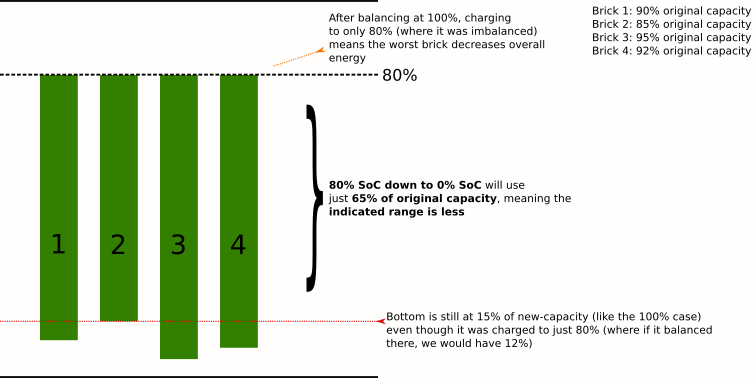 (unlike the other images, this one has the "top" portion of the charge chopped off)

This has some very interesting takeaways:
Overall Takeaways

For one, the above is a theoretical exercise with extremely exaggerated numbers and a lot of hand-waving to demonstrate only the effect in energy imbalances between the bricks. I really must emphasise the huge amount of hand-waving. There's a lot, and even with that the numbers above are just generalisations.

A Note on Other Batteries

Generally, packs are ultimately "top-balanced", i.e. balanced at 100% SoC. This extracts the most energy out of the whole pack, since voltage is highest at 100% - more time drawing power at higher voltages results in more energy. The more calculus explanation is simply "area under the curve", if you prefer. These would likely fluctuate a bit less, since they're being handled very consistently.

Model 3 cannot do this, because unlike pretty much every other battery in someone's life, it doesn't get routinely charged to 100%. But it would be disadvantageous to change at whatever percent it rests at - if it was low, well, see previous paragraph. So the thought is that it keeps a "top-ish" balance, wherever you happen to charge to routinely.

And I will sign off every balancing thread with this: If you are worrying about imbalance, don't. This is all merely informational and there is little you can do about it. The car is taking car of it for your charging habits. Tesla has replaced batteries under warranty prior to the 30% threshold for severely imbalanced packs - you would personally know if this was going to happen, because the car tells you and suddenly you're booking an approved warranty replacement of the battery.
Reactions: akenham, Arctic_White, GtiMart and 4 others
C

Mods, I derped. This was meant to be in the battery subforum. I apologise. 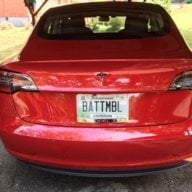 camalaio said:
Mods, I derped. This was meant to be in the battery subforum. I apologise.
Click to expand...

No, I'm glad you posted this here. I had been wondering about my battery recently, a June 2018 LR RWD. Due to the pandemic, I'm driving far less than before, so I'd been just charging to 50% when I needed it, and some nights not even plugging in. I had noticed my range degrading, and this post was very helpful.
C

RedModel3 said:
No, I'm glad you posted this here. I had been wondering about my battery recently, a June 2018 LR RWD. Due to the pandemic, I'm driving far less than before, so I'd been just charging to 50% when I needed it, and some nights not even plugging in. I had noticed my range degrading, and this post was very helpful.
Click to expand...

That is indeed a potential cause for reduced usable capacity, and I plan to target this point specifically in another thread (I guess I'll ping you on it once it's up). Charging and resting above 75% should correct that, if and only if correctable imbalance is the cause. This may take a few weeks, depending on how long it can routinely sit.

Anecdotally, I am usually resting it between 50%-70% myself these days (it really, really varies) for similar reasons. But I still have occasional charges that sit at 80% for a few hours, which is probably keeping it in check since it's not showing increasing reductions in capacity at this point. All speculation on my part.

There were lots of people that started to show reduced capacity when letting the car sit like that with a mid-level charge (and it's allegedly something Tesla noticed as well). They may have changed the balancing procedure as a result, but I wouldn't be able to tell. I have the luxury of a stupidly healthy battery that is well-balanced throughout its discharge, so I can't tell if it actively balances around 50% now for example - it's still balanced at that point! The horror, I know. I'm only slightly disappointed I can't collect that data myself.

I also think it's unlikely Tesla changed the balance procedure much. The "constant balancing' the Model S/X is thought to do would result in an always-balanced battery, but it comes at the cost of ultimate range capability and efficiency (something they really pushed for in Model 3).
Reactions: Arctic_White and RedModel3

P
How to take care of your battery without stressing: advice for new owners.