Battery self consumption across all three phases with 1p PV? 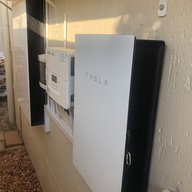 
I have recently taken delivery of the following:


I have noticed the following behavior when the Gateway / PW is set to Self Power with a 15% reserve. Note the grid remains energized throughout the below description. I am assuming the gateway is making all of the following decisions:


The sun comes up and starts to take some of the load on the red phase. Then the solar starts to charge the battery. It would appear that all is well and the battery gains as much as 10 to 15% charge.


Then it would appear that some load appears on the blue and white phase, in addition to the essential / house load on the red phase which has to this point been serviced by the PV, together with the PW charging load. When this happens it would appear that the PW then moves to evacuate power on the red phase equal to that being used on the blue and white phases. I understand this is so called “battery self consumption across all three phases”, a feature of the Gateway / PW combination.


However when the PW is in the mode of “Battery self consumption across all three phases”, the SolarEdge Inverter sees power being exported at the grid supply meter, assumes that power is being exported and appears to stop the PV. Certainly until the PW stopped exporting and starts charging again or is discharged back down to the reserve level, it will not reinstate the PV.


Has anyone seen this behavior before? Is the SolarEdge meter in the incorrect place and as such when the Gateway instructs the PW to utilize “battery self consumption across all three phases”, is it thinking there is no load and hence backs the PV out? What am I missing or not interpreting correctly? I would expect the PV to work whenever it sees a load, either from the PW or from the Red phase? I am looking for the PV to be used extensively to charge the PW during the day, and to meet the red phase load, but due to the self consumption on other phases the PV is backed off.


My installer confirms all is setup correctly. Please help?
•••
M

Are you allowed to export solar? There are some places like certain grid connection agreements in Hawaii where solar export is not allowed, so the solar inverter measures the net power flow and curtails the solar so that it does not export. It sounds like your SolarEdge is configured like this. If the SolarEdge is only measuring the Red phase and the Powerwall is offsetting usage on all three phases, then the behavior you observed makes sense. Logically, one way to fix it is to have the SolarEdge measure the net of all three phases so that the Powerwall discharge on the Red phase will not shut down the solar. I don't know if this is possible with SolarEdge hardware.
•••

Miimura - thank you - think you are spot on! I have spoken with the installer and we are installing additional CT's on the other two phases. If that does not work we will look at a single CT across all three phases in order to get the net position / supply consumption.

Does anyone have any experience with installing a 1p Solaredge Inverter SE5000, with a supply meter that is configured with three CT's in the offsetting / nett mode?
•••