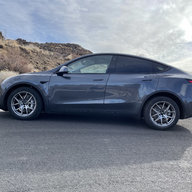 Suffice to say, they are not the only ones selling aftermarket wheels for the Tesla model Y. I would highly suggest wheelwiz in Canada as they have better prices SHIPPED after USD conversion rates AND after shipping still compared to aftermarket EV...and this is for the same exact wheels... yep, I have quotes from wheelwiz to prove I would have saved $300 USD had I ordered from them and probably would have gotten my order right to begin with.

My incredibly bad experiences.... First I order a set of wheels that not only their website says they have in stock; but, I even confirmed with the sales rep/owner. Then I get the phone call 2 days after ordering essentially saying that they were not in stock and won't be til 3/2021. Well these are for a separate set of winter tires so they won't do me any good around march. So I ask for an alternative wheel (this was my mistake not just going with a different company)... he gave me an alternative wheel style which I was not a fan of; but, b/c he told me "it's in stock and I'll get it out to you today." I asked about the alternative wheel style in black b/c I didn't want silver/titanium colored wheels.... I was told those were out of stock too despite the website saying they were in stock and NOT in drop ship status. I went ahead and ordered both the alternative wheel style and color that neither of which I really wanted... b/c he said it was in stock. I get a call later and he tells me he was confused and thought I was referring to the original style wheels I wanted in titanium even though the names of these wheels sound NOTHING alike, and I have a habit of purposely saying things multiple times just to confirm...and he does NOT have the wheels I ordered in stock; but, the Canada distributor can drop ship them.

Well that really sucked but oh well...so I get tracking, and then nothing...absolutely no movement for a week not even picked up from the Canada distributor...until I contact their company today to inquire if something was wrong. They were going to contact the distributor and about 4 hrs later I get an alert from fedex that the wheels are finally picked up.

Whether a series of unfortunate events or incredible disorganization, my belief is that it's important on forums that we share our experiences with companies especially if it was a real bad one.

Hope they get their stuff together and at accurately reflect what is actually in stock, drop ship status, and what's out of stock....I realize this is probably this guys side business.
Reactions: BodegaBay
F

Man, I'll be sure to avoid Aftermarket EV from now on. In my opinion, 4WheelOnline has much better options and pricing than them. Feel free to check them out.
Reactions: RenoMD