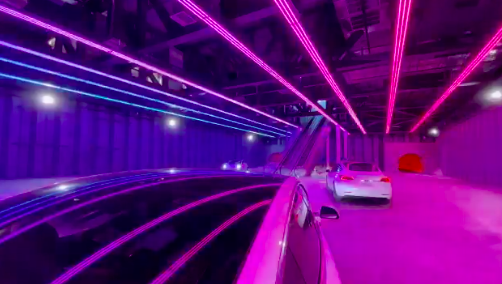 The Boring Company posted a video that gives an updated look at its Las Vegas Convention Center loop.

The area shown in the video is expected to be a passenger station. And, it seems the project is coming along. In addition to the strobe lights, it appears there are escalators installed for passengers to reach the station.

Boring Company describes the “Loop” as an all-electric, zero-emissions, high-speed underground public transportation system in which passengers are transported via compatible Autonomous Electric Vehicles (AEVs) at up to 150 miles per hour through Main Artery Tunnels between stations. AEVs are Tesla vehicles (Model S, 3, and X) that operate autonomously within the Loop system.

Have they checked this for epilepsy triggers? Some of the flashing was a bit much.
•••

banned-66611 said:
Have they checked this for epilepsy triggers? Some of the flashing was a bit much.
Click to expand...

I think you mean "photo epilepsy" (PSE) which is much different from just "epilepsy" in general. The answer is yes it was researched. But having said that, I agree it is a bit over done at times for my personal taste. Also to say the lights don't do that all the time. Usually just during special events. Most times they are just shades of white.
Last edited: Jun 10, 2021
•••