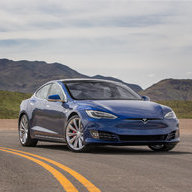 Basically, the odometer (as well as trip 1 and 2, miles since last charge etc) was stuck. Meaning you could potentially drive 100,000 extra miles and resell the car for a lot more than it's worth.

I debated leaving it like that but since I am a nice guy, I rebooted the MCU and things got (almost) back to normal: it's tracking mileage again but wiped out my trip 1 and trip 2 totals which I had been nursing from day 1.

The newer models have an independent internal odometer, and it reports to Tesla. When the issue is fixed, the odometer will again report the correct mileage, eventually. I don't know how many years back this feature was implemented.
•••
P

Sounds like symptomatic of a dying eMMC chip to me.

I had my odometer and trip meters freeze a couple times on my mid-2016 MS90D with MCU1. Both times were cases after I done extended trips, multiple navigation reroutings, and this would happen after a couple days. In my case a reboot of the MCU, while took a long time for MCU to book back up, corrected the issue without totally wiping out my save trip meters. This was well over a year ago, so long before any of the software builds recently released. One of the things I did out of this was rebooting my MCU a little more frequently including typically every date when I was doing extended road trips. Never had a repeat other than those first two initial times, but I did finally decide to bite the bullet in mid-December and did the MCU2 upgrade.

For me, is about 20 miles in total that I know I've travel than what my odometer shows. That's about a 0.03% error versus the ~67k miles that I've traveled in the car. That's honestly not enough that I'm going to worry about it when I do end up deciding to sell the car as honestly it's likely within the error tolerance of the odometer anyway given the variances which occur over level of tread wear, etc.
•••

I’ve had that happen before and reboot always fixes it. My glitch with the new update was BT related. Touchscreen unresponsive wrt play/fwd/rewind. Then it wouldn’t play music from my phone at all. Spontaneous reboot a few mins later and all is well.
•••

M
Odometer stuck and now car has been in service for 2 weeks.