Can I look at your Model Y in South Dakota?

I drank the cool aide on Tesla around 3-4 years ago and now find myself in the hunt for a family car. I could go on and on about what I want/need and see what others think but I feel the best would be to just look one over, set a car seat in the back, and maybe even drive one. I have been to a few Tesla Showrooms without any luck an am trying to schedule a test drive but Tesla doesn't have anything available right now as they are all sold out. End of quarter thing and big demand. Imagine that.

Anyway I do see a few Tesla's around SE South Dakota and was wondering if anyone that owns one would be willing to meet up and show me the ropes? I think I would get more from talking with an owner than a salesmen/women anyway.

I tried to PM some members here but maybe that doesn't exist or I don't have that privilege yet.

Thanks and Happy Thursday
Tony
••• 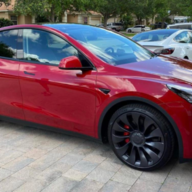 Perhaps you should try renting a Model Y on Turo for a couple of days.
•••
T

Just looked and the nearest I can find right now is Minneapolis. Its a good option and one I was too dense to think of.

Thanks for the suggestion. In the mean time if someone that lives near Brookings wants to save me 8 hours of driving to and from the cities I would really appreciate it.
•••

Another option would be to go to camp the closest supercharger(s) to you and ask people who show up for a charge whether they're willing to do whatever you're looking for. Brookings is basically right between Sioux Falls and Watertown, but of the two I'd say Sioux Falls was the better bet for this strategy. It's at the crossroads of two interstates and therefore will have higher Tesla charging traffic, instead of only serving I-29 like Watertown.

Also, you can direct message people here, but I think you don't get the auth. to do so until you've posted a handful of comments already. It's part of the forum's policies to stop spam, harassment, abuse, and sockpuppet accounts.
•••

How far can I drive without coolant

M
70amp main breaker - what can I install?

A
AMA: I test drove a Mach-E GT Performance Edition and Model Y Long Range - and I bought a MYP