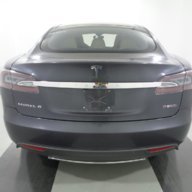 Over the last 6 months or so I have had the car lock up on about 3-4 occasions before starting a drive, and maybe 1 or 2 when driving(car continued to drive fine). The last time the Center screen was lit up but was not responsive. The screen in front of the steering wheel was dark, but in the past I believe has been lit up when frozen. In the starting to drive cases I could not put it in drive(although I have been using pin to drive for security and with frozen screen I can't enter the pin).
In each of these cases a soft reset(holding the steering wheel buttons) fixed it, but this is a pain when you have to get going quickly to make an appointment or such.

I have 2015 P85D AP1 and original MCU1
fyi - The mcu is responsive when operational, voice commands work well, navigation and music streaming works without issue.
* I believe the MCU may have been replaced in 2017 or early 2018 before I got the car. I asked a past mobile tech for the past service records but said he couldn't give them as it had the past owners information. He instead verbally listed off what had been done before I got the car. (wish I wrote it down after, so my memory might be off and it might have just been a screen replacement or such) So leaning to this not being a failing MCU issue.