This week the Economist published a few articles on carbon accounting and how we're doing it wrong.

The right way to measure carbon emissions
Net-zero targets are necessary, but not sufficient


[...] most net-zero targets refer only to the carbon produced within the target-setting entity’s borders. They exclude the carbon that is related to goods consumed there but produced elsewhere. When a Briton buys a smartphone made in a Chinese factory that is powered by a coal plant the carbon emitted in its manufacture does not count as “British”; the jet fuel that brings a South American guava to New York City is not counted as part of the Empire State’s emissions.

If every country had a production-based net-zero target none of this would matter. At a global level, there is no difference between the carbon emissions that are produced and consumed. But so far targets have been set by economies that generate only a sixth of global gdp. The volume of carbon that slips through is huge—a quarter of all global emissions are tied to trade flows. And the gap between carbon consumption and production is especially big for rich economies that focus on services and import lots of manufactured goods. When consumption-based measures are used, Britain’s emissions jump by two-fifths. Imported emissions add a fifth to the European Union’s carbon count, and a tenth to America’s. If you measure them properly, emissions from big cities such as New York, London and Berlin double.

The world needs to shift towards goods that have a cleaner footprint, regardless of where they are produced. That will require manufacturing hubs to shift away from dirty sources of fuel such as coal, and fewer goods to be transported by air. A range of policies could accelerate this shift. At the gentle end of the spectrum, better labelling could prod consumers to consider the carbon footprint of what they buy. At the tougher end, the euis considering a climate tax on dirty goods it imports. Today’s net-zero targets are better than nothing. But if climate change is to be tackled, countries and consumers must take full responsibility for their carbon.​
Greta Thunberg accuses rich countries of “creative carbon accounting”
When it comes to measuring national emissions, she has a point

In the long run the only answer is for all economies, including manufacturing-heavy ones, to shift towards cleaner sources of energy. Trade deals could be used to encourage exporting countries to cut emissions, says Sam Lowe of the Centre for European Reform, a think-tank in London. The eu is considering a carbon “border-adjustment” tax—higher tariffs on goods from countries that do not meet the eu’s environmental standards. America’s trade deals already allow for penalties on countries that fail to meet their commitments under the Paris climate agreement of 2015—though President Donald Trump shows little interest in using them. The trade deal struck in June between the eu and Mercosur, a South American trade bloc, could be blocked by eu member countries, or meps, unless Brazil does more to protect the Amazon rainforest.

As decarbonisation gets under way in rich countries, emissions embedded in imports will loom larger. Finding ways to curb them will be tricky. But they will become harder to ignore. 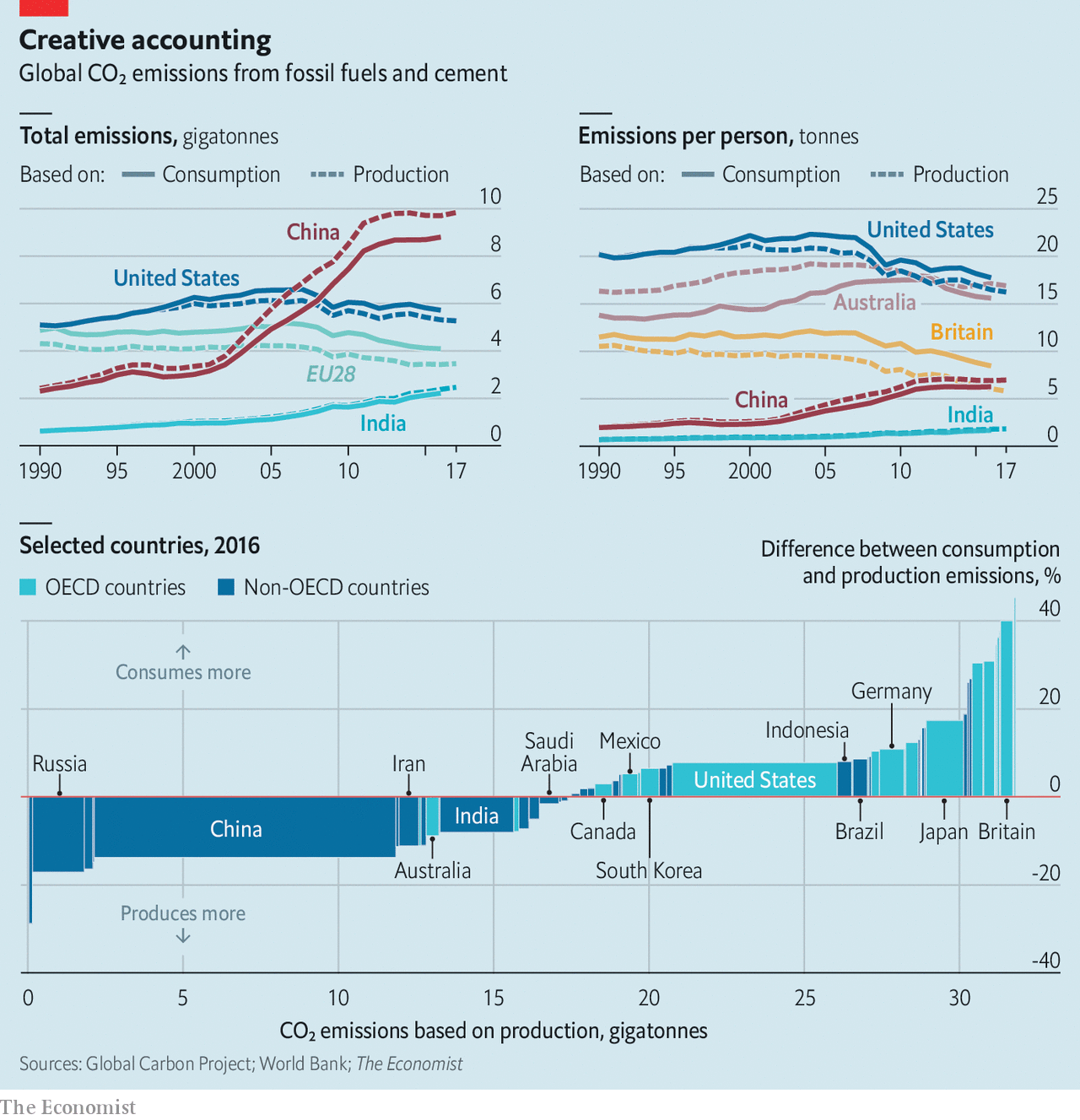 More than 100 countries have set themselves “net zero” carbon-emissions targets. One drawback is that few account fully for emissions linked to international trade—ie, those resulting from products that are consumed at home but made abroad. For rich, service-oriented economies, the gap is huge. Britain consumes 40% more carbon emissions than it produces; America, about 8%. China, the world’s biggest emitter since 2009, in effect spews climate-warming gases on the rich world’s behalf. Its exports, mostly related to goods consumed in developed economies, alone make up 5% of global fossil-fuel emissions.
​
Reactions: iPlug
•••
I

It will be interesting to see how “border-adjustment” taxes play out that are levied against countries that do not meet carbon/environmental standards on the production side.

iPlug said:
It will be interesting to see how “border-adjustment” taxes play out that are levied against countries that do not meet carbon/environmental standards on the production side.

Yes, and would such taxes violate WTO rules? This article says no, but I don't think it's been tested in court.

The WTO formally codifying border-adjustment carbon taxes would be rather helpful. That would decrease the chance of such actions being seen as protectionism or populist measures resulting in trade wars and escalating trade tensions.
•••

Should we just ditch biofuels?

Energy, Environment, and Policy Jul 13, 2022
ItsNotAboutTheMoney
I
T
Repair that building instead of tearing it down

Prediction when BEV will impact fuel, and more importantly statistics.