I quite often have this picture on my app - correct amperage showing, correct voltage - but zero miles per hour being added. Although the time to 80% charge seems roughly right - 48 miles to add.

Is there something I'm not doing?

It's warming up the battery first, that's where the power is going. After a few minutes, it will start charging the battery. Sometimes it may even go into further cycles of warming and charging.
Reactions: Zakalwe
•••
N

Ah, OK, thanks.... I didn't know they warmed up for home charging. On the 13 amp charger, when I first got the car, it didn't seem to - it always seemed to charge immediately. Perhaps when it senses 32 amps it need to get cozy first?
••• 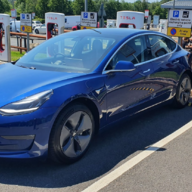 I noticed the other night that my M3LR took about 10 minutes at 32A before it actually started charging, but it was -5°C outside at the time, and the car hadn't been driven for a few days, so it was cold as well.
•••

The cells can easily charge at 2C or more, which is around 23 times higher than a 32 A AC charge.The delay between the charge point starting to advertise the availability of power and the charger(s) ramping up seems to be pretty variable, and probably related to temperature factors in components other than the battery pack. In all probability, the charger(s) ramp slowly to warm up their own components, to reduce the risk of damage from thermal shock.

The latter was a major problem during the development of the motor inverters for the Prius back in the 1990's. Toyota found that the IGBTs didn't like going from cold to high current operation, as the sudden heating at the microscopic level in the silicon caused fractures and device failures. The fix they came up with was to limit the current through the high power circuitry for a short time, so that the temperature rise was more gradual, over a period of tens of seconds, rather than a few µs.

I don't know for sure that this is what's happening, but it seems possible, especially as 32 A will be running two of the chargers at their maximum rating, of 16 A each. My guess is that the chargers can probably get pretty cold, my car has shown an internal temperature of down to -5°C this week, and, as the chargers are under the rear seat, my guess is that they were probably down around that temperature. When operating at full power the chargers probably run the switching devices at die temperatures around 50 to 60°C, maybe higher, and with the very small mass of the dies they will heat up very quickly if not limited in some way. Another clue is that I've noticed that our PV inverter behaves in exactly the same way. It's mounted on a north facing wall, outside, so can get pretty cold at night. We had some really bright sunshine yesterday morning, despite the cold temperature, and it took about 15 minutes for the inverter to ramp up to the maximum output. The giveaway was noticing that the DC input voltage was higher than it should be, a sure fire indication that the inverter is throttling the output power for some reason.
Reactions: LukeUK, ACarneiro and 26ct2143
•••

This is a known issue with industrial VSDs. When the output frequency is low, of the order of 1 Hz, the rate of change of current is slower than the thermal time constant of the IGBT block. This means that temperature isn't constant across the 6 gates, causing mechanical stress within the IGBT and between the IGBT and it's mounting. Most VSD manufacturers impose a de-rate if the expected percentage of the VSD's lifetime a load requires full current at low speed exceeds 5% or so.

For an EV charger, as you've said, the same condition exists for a period of time when loading a cold charger, but the temperature difference is likely to be much greater.
Reactions: M3noob
•••
N

LukeUK said:
I noticed the other night that my M3LR took about 10 minutes at 32A before it actually started charging, but it was -5°C outside at the time, and the car hadn't been driven for a few days, so it was cold as well.
Click to expand...

Yep, this seems to be the case and my original question has been substantially answered - thanks everyone.

I had only just had my 32 amp charger installed and, as nothing was happening, I posted the screen shot and was worried something was wrong. I am a few days in now and it's all working fine - when cold it takes a while to start adding miles; when warm (just after driving) it charges immediately.

It's rather nice to know that I can now fully charge the car from an orange/low battery to 80% easily overnight.
Reactions: LukeUK
•••

A
App shows 16A with option for lower, but car was clearly pulling > 16A?