Yesterday, (after having owned my Tesla for a total of 18 hours), I put a suitcase in the front trunk (i know what it‘s called, but spell check is a PITA) that was too tall. When I went to close it, the right side latched but the left side didn’t. It seemed secure and the car would have been drivable at low speeds (an impossibility for new owners!)
The display showed it was still open. I couldn’t close it completely, nor open it (since car thought it was open), nor put car in drive.
Long story short, I called Tesla roadside and they suggested turning the car off (not screen reboot). When it turned on, the display showed trunk was closed, I was able to open trunk, and move the suitcase.

suggestion for future update??? allowing access to the “open” command on display when car thinks trunk is open (like pulling the trunk release in a regular car)
Last edited: Jun 7, 2021
Reactions: LionXng
S

The Frunk lid is made of aluminum, supposedly to save weight. But the end result is that you have to be very careful when closing it. And, as the manual says, you have to use two hands, one on either side of the Tesla logo. I don't know if you used one hand or two but when you try to close the lid with only one hand, it's very likely that only one side of the trunk will latch, as happened in your case. Or, you could wind up with a shallow dent about the size of the one hand used to close it.

Yup, learned lesson (the hard way)
From now on, it's grocery and gym bags, only!
Reactions: GtiMart 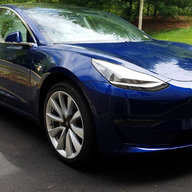 I don't understand the left side/right side stuff. There is a center latch and a secondary center latch. If there was any latching going on and one side was down while the other wasn't, you bent your hood.
Reactions: Gasaraki

Dunno
The left side was slightly elevated (and the car thought it was open).
After resetting car, it's now even all around

LionXng said:
I don't understand the left side/right side stuff. There is a center latch and a secondary center latch. If there was any latching going on and one side was down while the other wasn't, you bent your hood.
Click to expand...

Right, both latches are in the center:
Maybe the latch was partially engaged, but I think the only time I experienced something similar (one side of frunk higher) was when I left a tool on near the bump stops on one side.

As others pointed out, the hood is aluminum and is more fragile than typical trunks, so should never be "forced" down as there is a real risk of deforming it.

A
How often does your M3P get rebooted? Disillusioned after 25 days.

My trunk has a mind of its own - opens randomly