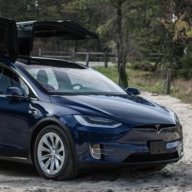 I thought I’d spend a few minutes and walk through my experience buying a CPO (used) Model X and my move from the Model S to the X.

I’ve purchased three Model S’s in the past, 2014 MS 60 (inventory - fully loaded), 2015 MS 70D (ordered - only UHFS, Autopilot, and leather), and 2017 MS 90D (inventory - AP2 EAP, PUP, cold weather, and leather) and I’ve had excellent buying experiences with all of them, and since I have seen every option the following were my thoughts when picking an X

My General Thoughts on Packages:

- SAS (Air Suspension), makes the ride a little more comfortable but it is really nice to be able to raise the suspension when going over dirt roads and speed bumps. Not completely necessary.

- The current premium package. I like the interior lighting that it offers, and the ‘bioweapon defense mode’ really does work well when in farm country or behind a nasty vehicle on the interstate. For the older models it adds a bit of nice flair with the alcantara on the dashboard.

- UHFS (upgraded sound), worth it if you don’t want to do any work. If you decide against it, you will be disappointed UNLESS you plan to upgrade your sound.

- Autopilot AP1 and AP2. I only use the TACC feature (radar cruise control), which is amazing. Both do a great job at this, AP2 is a bit more future proof.

So I went into the search for an X mostly because I wanted something that rode a bit higher and was easier to get in and out off. The S is awesome, but for those of us with back problems, the S is rather low to the ground.

I’ve also come to realize that 200 miles is more than enough range. I hardly ever do more than 100 miles in a day, and for the couple long trips a year, supercharging a few more times during the trip is not that bad – we all need to stop for some reason or another anyhow after a few hours and it breaks up the trip.

With that I was searching for Model X with PUP (doors and bioweapons), Cold Weather Package, AP2, with a preference for free supercharging (so a 2016/2017 MX made in that very short period from AP2 to the end of supercharging). Thankfully the ev-cpo.com website is AMAZING, and after a few weeks the unicorn appeared.

March 15th – The car appeared. A 2016 Model X (Blue, Black Interior, 5Seat, PUP, AP2 EAP, Cold Weather, Supercharging). I quickly hit the get photos button and they came rather quickly. The pictures were bad/low res quality, but there was no apparent damage, and the price was amazing, so awesome, lets do this before someone else does.

About 2 hours later I got a phone call from Tesla, confirming the options of the car and asking about trade in plans, etc.

Later that evening I got an email from the delivery advisor, talking about, financing, registration, delivery, and trade-in values of the S90D. Their offer for the trade-in was AWFUL. When I’ve traded in the previous cars someone came out and took pictures and did an appraisal, this time it was all sight unseen. So, since I didn’t want to list it and do all of the work myself, I tried carvanna and carbiz. Went with carbiz as their offer was 13k more then Tesla.

March 16th – Confirmed the car had EAP since it was listed before I purchased on the website but not on the car details page on the web in MyTesla. Tried to do the $2k FSD upgrade, told that wasn’t an option…

March 23rd – Delivery at Tysons Corner scheduled for 6pm. They were swamped with end of quarter sales. Crazy buyers with 40 page checklists because the web has told them that Tesla quality is bad, so a bit behind. The delivery people were trying their best and around 730 the X was ready. Overall it was in excellent shape for a used car. Couple of scratches on the front bumper and a bit of damage to the vinyl on the inside for the front passenger footwell area – nothing concerning, and nothing to whine about. Delivery specialist quickly walked me through the differences between the S and the X and I was on my way.

A nice extra was that the seats were ventilated, hadn’t even thought of that.

March 29th – Took the car to my favorite car detailing place (https://www.atomicautosalon.com/), they made it shine and buffed the scratches out. I was going to have it detailed anyhow, so why whine to Tesla about a few light scuffs. They cleaned the inside and out. Much better than the Tesla folks do. They noted that the trim was a bit off on the wheel well behind the scratches.

April 1st – Got a hitch installed for my 1UP bike rack (2016 Tesla Model X Trailer Hitch | etrailer.com) love this since the X didn’t come with the tow package or hitch, and since its low profile and doesn’t require mounting/unmounting everytime I use it.

April 8th – 12th – Took the X to Tesla to check on the A/C as it stopped working for a few hours over the previous weekend (it came back, but it was odd). Also had them look at the at that trim piece, they fixed the trim piece in 10 seconds, but they had to replace part of the A/C system under warranty. They gave me a loaner S for the week.

April 15th – 19th – Final Modifications to the car were to get the base audio sounding amazing (Matt Schaeffer on Instagram: “Here is our latest @musaic_design #Tesla #ModelX #audiophile build. This was was pretty quick and straight forward. Utilizing all OEM…”). Matt Schaeffer at Sound-FX in Delaware updated the speakers and sound system, truly amazing difference over the Tesla sound (both base and UHFS). He installed a nice Focal Flax three way component set (PS165F3) in the front, left the falcon wings with the standard speakers, and added a Focal slim subwoofer (P25FS). All of the audio equipment is in the back right behind the second row of seats in that extra storage area, and the whole thing looks stock and sounds studio!

All in, I am really happy with the process. The Tesla folks (Ashton and Jose) were really responsive, most of the discussion actually happened on the same day I put down the down payment on the car. They kept me up to speed on delivery timeframes and were proactive in getting everything set up for the delivery. I do think the trade in process is a secondary thought, but I can’t ding these folks for that. The trade in value the last time was too low too, but nothing to this extent. I recommend that people try to sell their cars on their own or trade them in to a different company (carbiz in my case).

This X was a 60D originally (since it still has the 60D badging), and I really don’t understand how Tesla calculates CPO pricing, but I encourage you to look for these 60D’s that have been upgraded to 75, since I believe their algorithm sets the price of the CPO based on the 60D pricing vice 75D which will save a lot. Hopefully a lot of them will be coming off of lease in the next year for others looking for a similar range and price.

It’s a used car and I didn’t expect (or demand) perfection. I knew that Tesla would make anything right, if need be, under warranty and that there would probably be a few days in the shop within the first month or so. With all of the talk about “should I accept X” under the CPOs in the forums, I don’t think we can expect absolutely perfect used cars, but we can expect good ones with 4yr/50k mile warranties that cover everything.

The few aftermarket upgrades (the tow hitch) and the amazing sound system make the car complete to me, and hopefully I can convince myself not to upgrade anytime soon. Couple pictures below (using the pictures from the audio install as Matt is a considerably better photographer than I am). 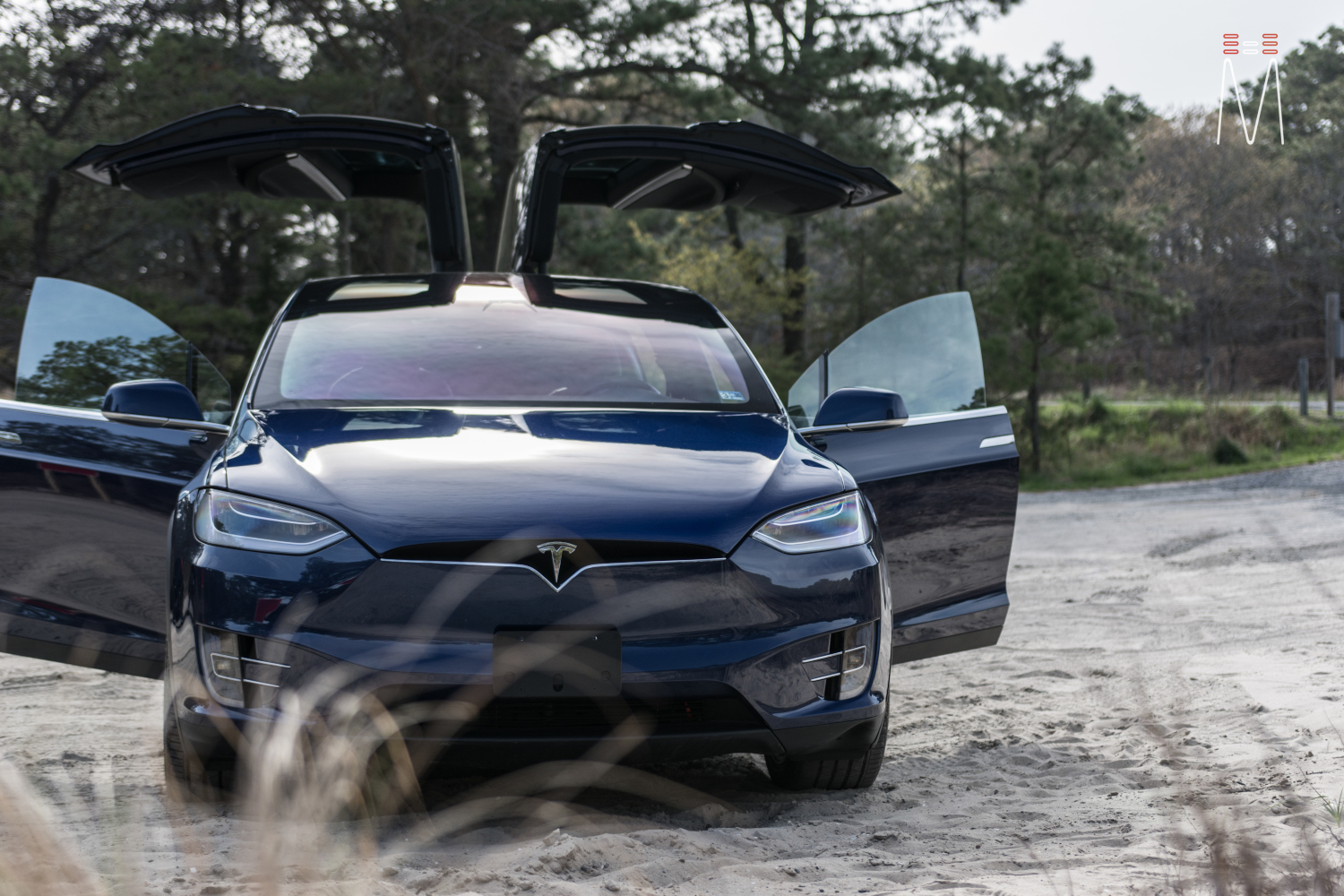 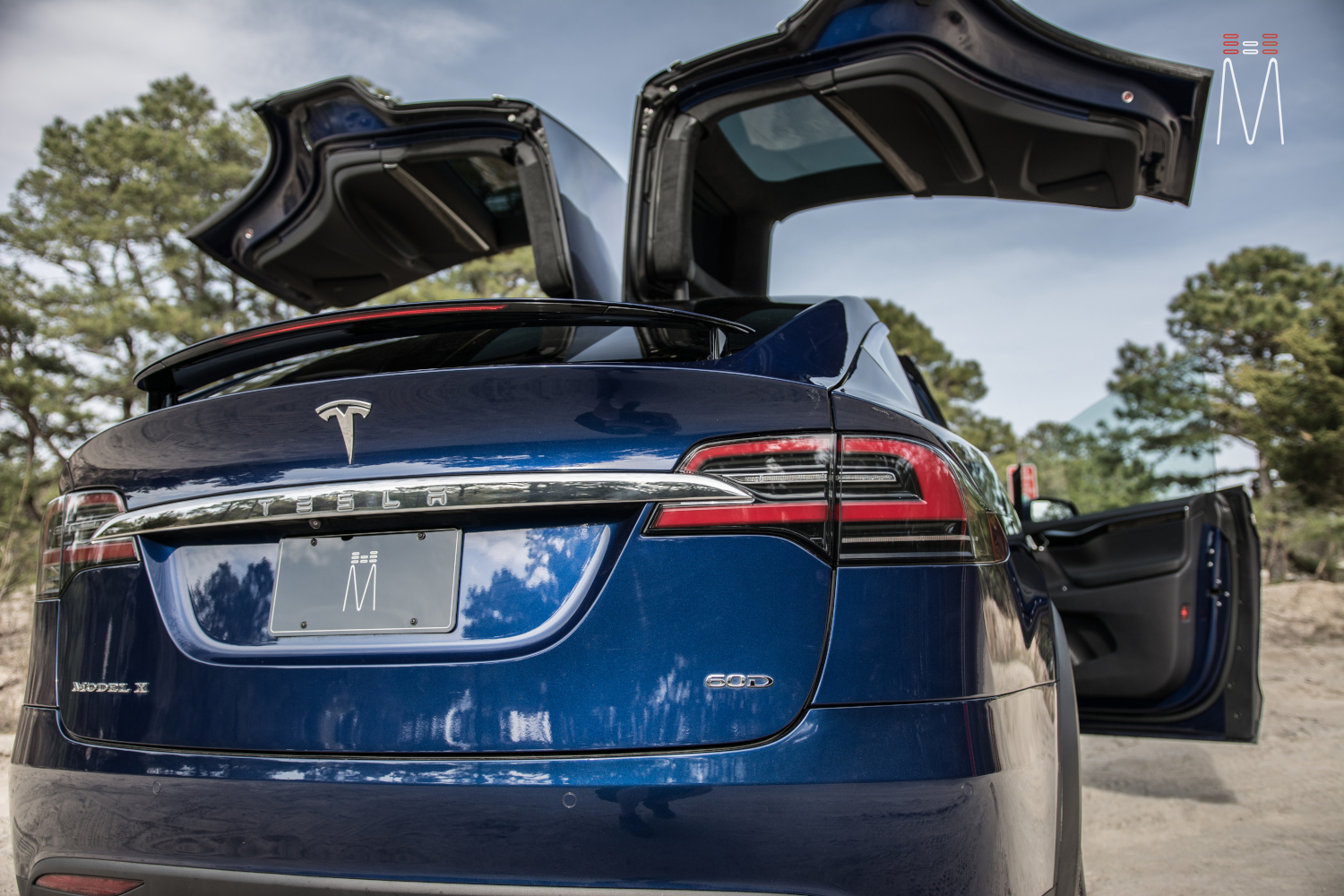 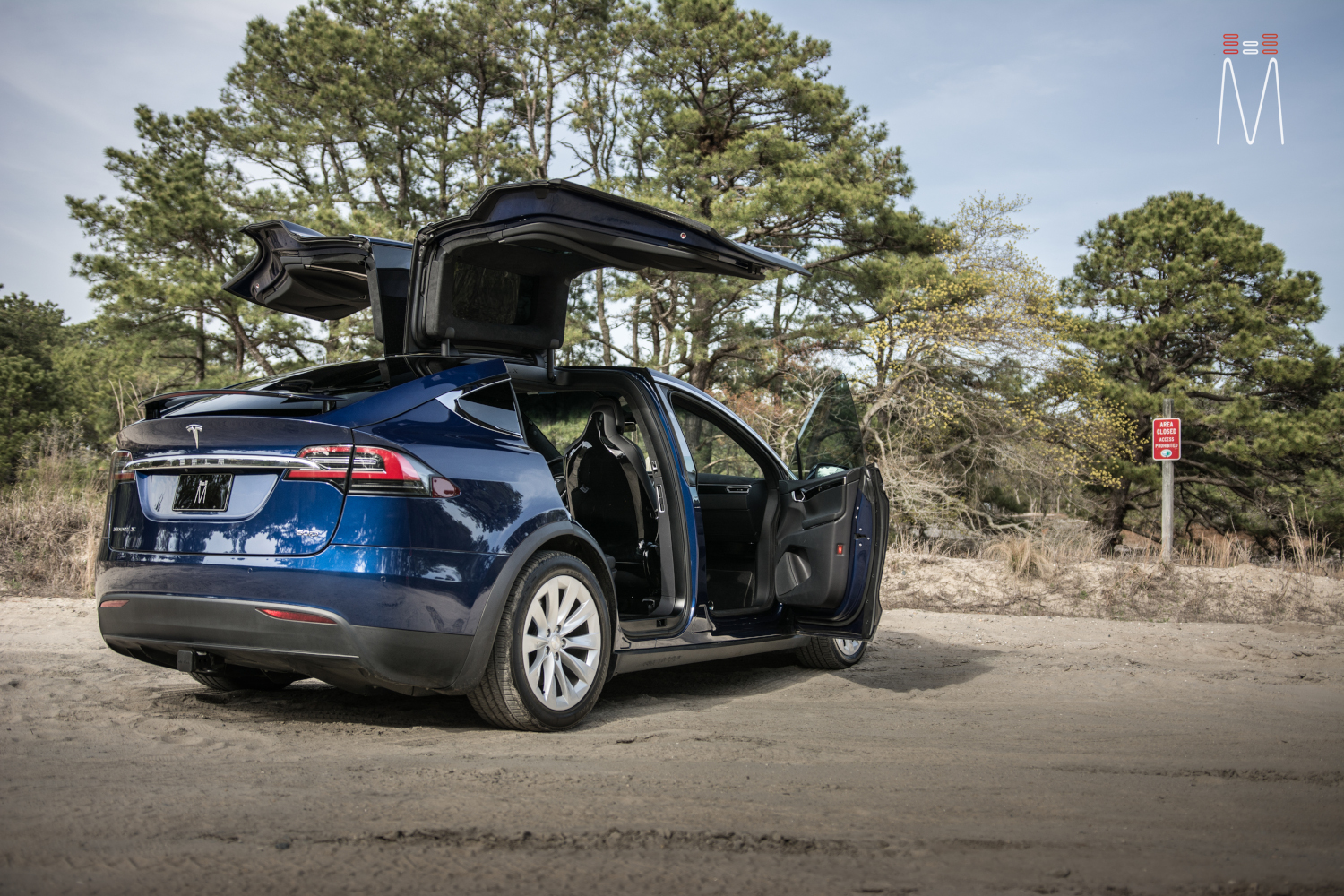 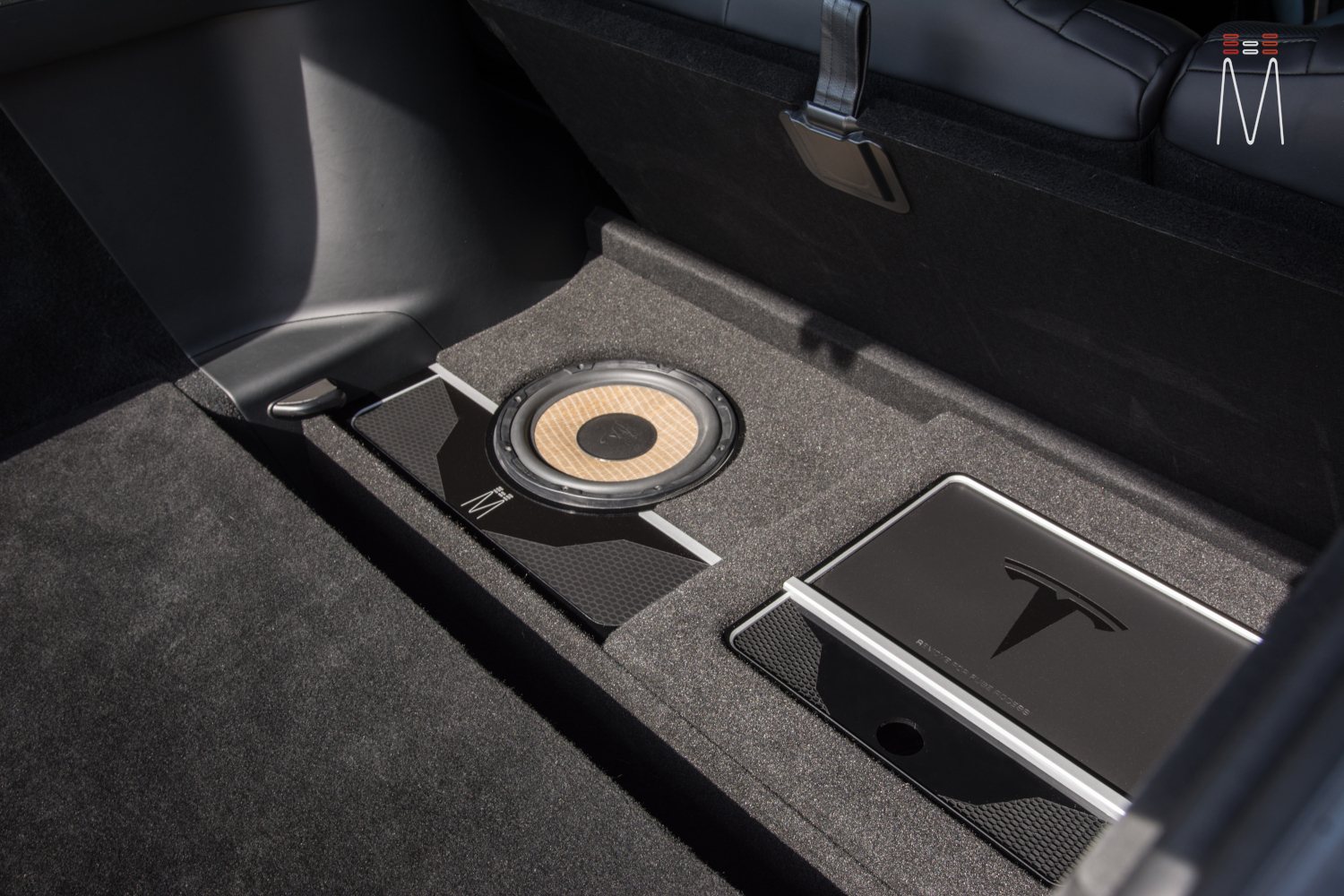 Sound system looks great, I've tried a 2018 car with 'premium audio' and to be frank apart from the bass the rest of the sound staging was very flat and no much better than standard and nothing close to what a good aftermarket set up can do.

Overall though the X is simply a fab family car in any spec, we had a 60D which got written off, and now loving our 75D.

Get some 22s on the car though, really completes the look of the car. You loss about 5-10% of range, but worth it . 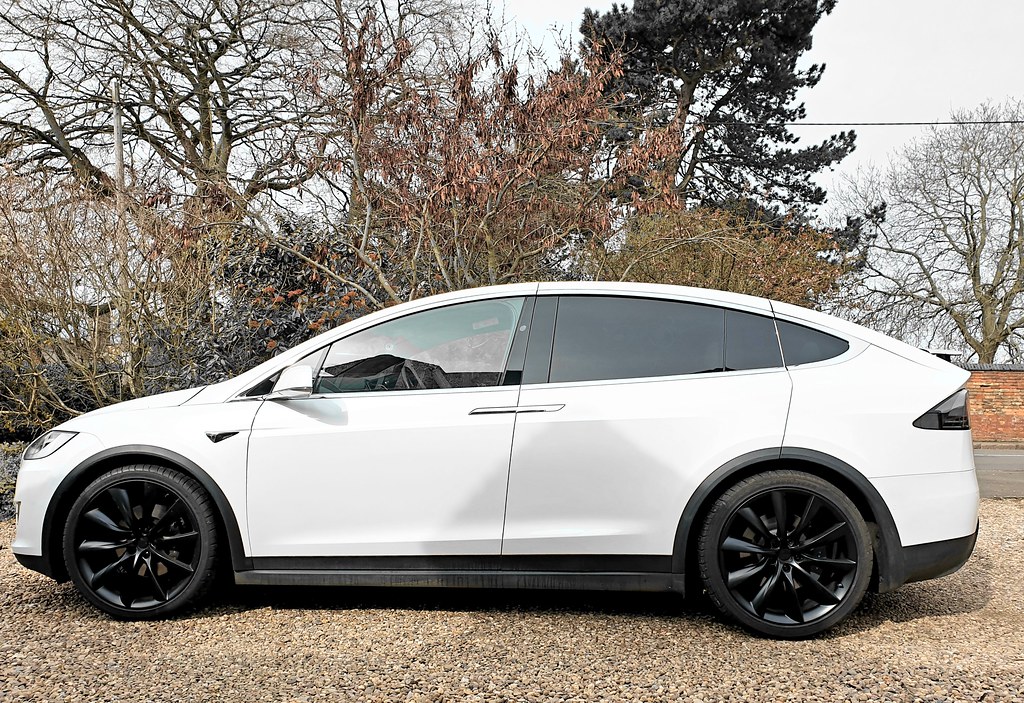 Thanks for the comments, I love the white with dark wheels on your X!


gangzoom said:
Get some 22s on the car though, really completes the look of the car. You loss about 5-10% of range, but worth it
Click to expand...

I am more afraid of the potholes in the area. For me the standard size wheels are awesome and I like a more cushy ride.


gangzoom said:
Sound system looks great, I've tried a 2018 car with 'premium audio' and to be frank apart from the bass the rest of the sound staging was very flat and no much better than standard and nothing close to what a good aftermarket set up can do.
Click to expand...

The audio upgrade is amazing. Having had both the premium UHFS system and the base audio in the past, this clearly blows them both away. A really good sound system will make a considerable difference in the daily commute. The Focal Flax speakers are amazing, and to me they sound nearly as good as the utopias. I went with JL Audio VXi amps for the front components and rear doors, as the amp is rather small and has a built in DSP. The vx800/8i allowed the system to be fully active and the tuning that Matt did with the DSP makes the audio staging come together with an excellent clarity and image.
Reactions: gangzoom
G

I've got the Focals on the front, thought about adding an amp but top lazy/cheap.

Changing the front stock speakers is a must in both the stock and premium setup.

gangzoom said:
I've got the Focals on the front, thought about adding an amp but top lazy/cheap.

Changing the front stock speakers is a must in both the stock and premium setup.
Click to expand...

With my last S, which also had base audio, I replaced all four door speakers with Focal Flax PS165FX woofers. This was a improvement, but it wasn't until a few months later when I added the DSP and amplifier that the sound went from improved to much better. I returned that car back to stock before selling it. This time around I went with a much more professional install and the results have been fantastic.

If your X is a 5 seater, there is a great spot right behind the seats to install all of the equipment for the audio.

Added a IRO Model X AP2 Dashcam, although based on the neural network presentations a few weeks back, it looks like the new FSD computer has a built in video encoder, so hopefully AP2.0 users will eventually have the dashcam functionality with the FSD upgrade occurs, but until then I wanted a basic dashcam that could be used without any visible wires. It's full HD (1920x1080), hopefully this is a good (and temporary) step while we wait for Tesla's solution to go live.

Here is the camera installed: 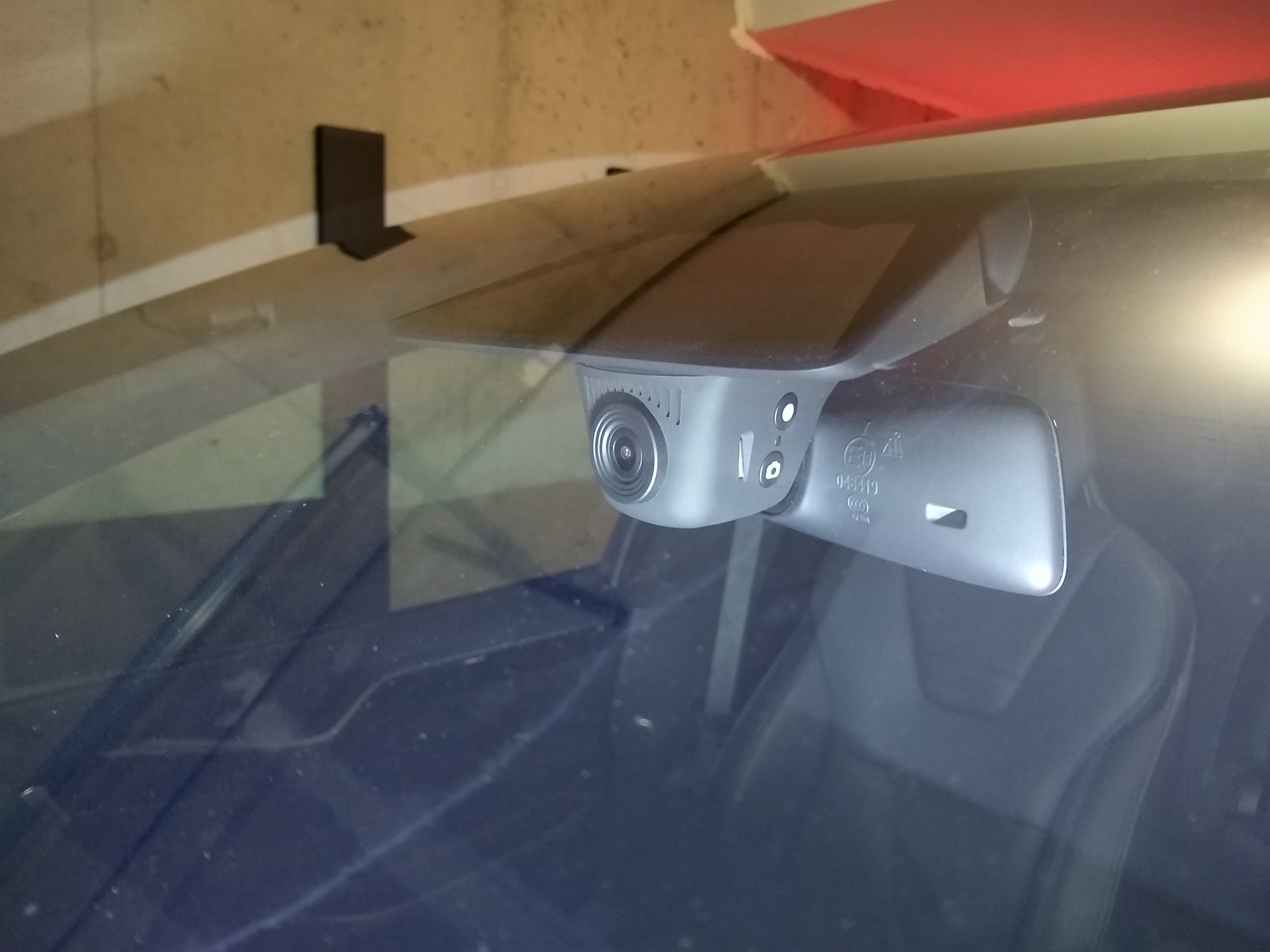 And here is an example of the picture (had to get a picture with the Moose crossing sign on my trip through Maine): 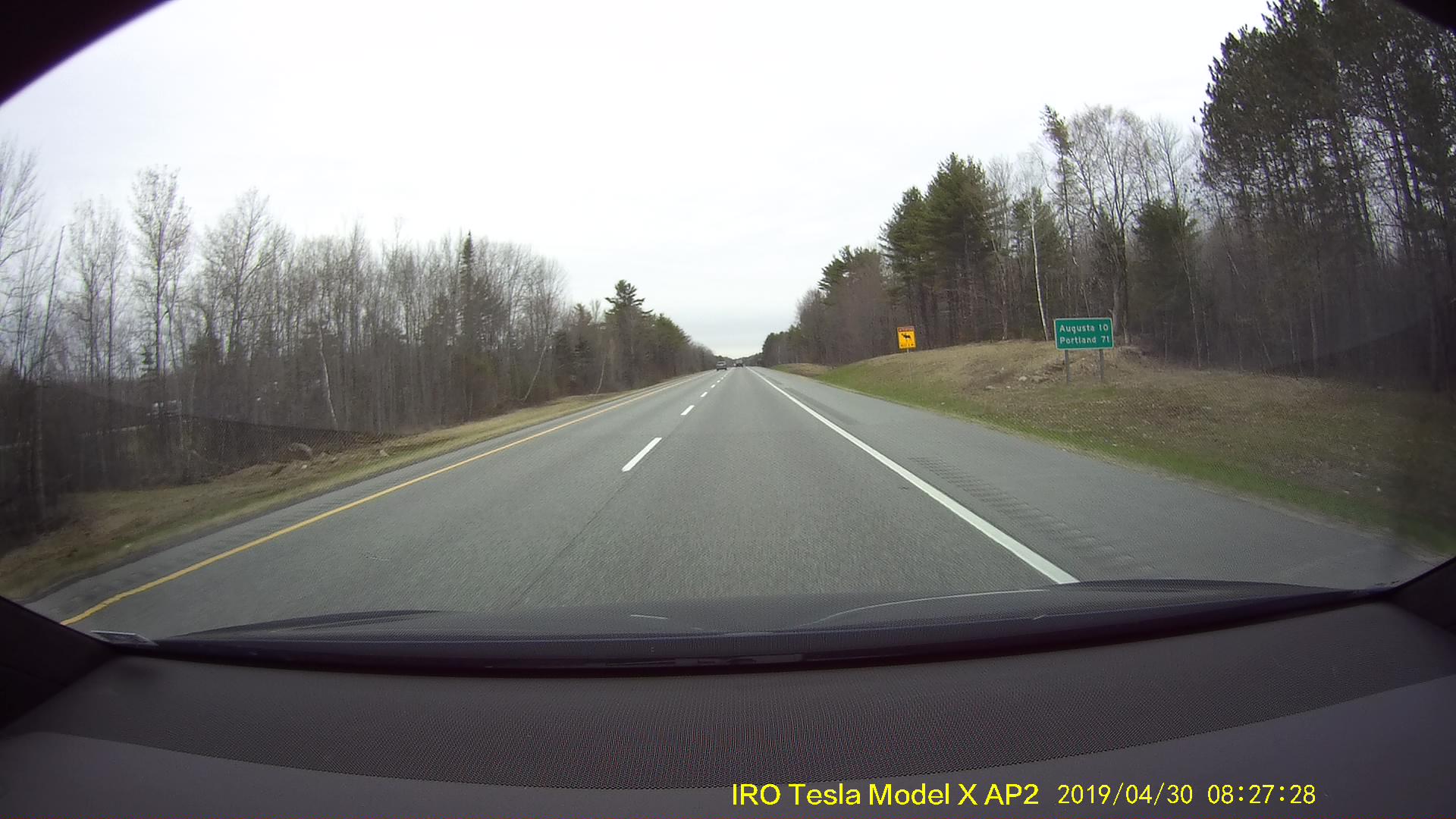