We got back from a trip down to Galveston for a family function last night. We spent several nights at the Galveston State Park on the beach side. We finally visited the Houston Supercharger and the HUGE service station! We had a large cargo carrier on top of the car which was fully loaded with tent/camping supplies, as well as a full trunk and frunk.

With a full charge going 70MPH, we could have easily gone from North Dallas to Huntsville, but two little girls needed to pee right before Corsicana so we stopped there for a late lunch on Thursday. We put some more miles on the battery and headed south toward the Houston Supercharger. As luck would have it, the next restroom break was needed right before Huntsville so we stopped there and charged a bit. We had plenty of time to spare so swung by the Houston Supercharger just to check it out. When we got to the campsite, we had a nice 14-50 outlet we plugged right into. I set it to charge at the full 40A and it was able to sustain it without popping the breaker all night, too.

Yes, the mosquitoes were large and plentiful. Yes, the temperature was a little high for camping. However, the tent cooling was taken care of by a contraption I made to pipe the car's rear vents out the window and into the tent. I've got some pictures of the setup on my wife's phone and will post them, later.

All in all, the Model S held up nicely. We rolled just over 33,333 miles before we got back in to Dallas last night. The next Galveston trip will include Moody Gardens that has some HPWCs onsite.
•••
V

nice to know about the trip.

I might be visiting Galveston around Feb next year.

Dallas service center is backed up for several weeks.
•••
C

Here's a picture of my vent setup to pump AC into the tent. The first two nights really needed it. 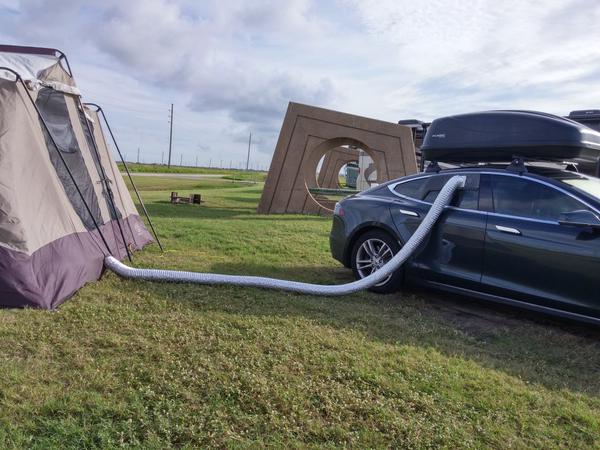 Why from the back vent? Won't it be more effective from the front directly piped from the right front passenger car vent?
•••
C

mkjayakumar said:
Why from the back vent? Won't it be more effective from the front directly piped from the right front passenger car vent?
Click to expand...

It's easier to attach something to the rear vents, plus the tent is going to be toward the back of the car. It's also easier to utilize the back windows for this so you can set the car up without opening and closing the doors you're using for this.
•••