Just wanted to write a note as there were not many Mt. Kisco delivery stories here when I ordered and took delivery of my MYP during November.

I ordered a MYLR during late August. I ordered in in blue. About a month later I changed my mind and had my Connecticut based service advisor change the color to red. I also began to realize at that time that the MYLR had much slower deliveries than the MYP. A few days later I decided to place another order for a MYP. Unfortunately, we've been living without a second car for almost two years and it was time to go back to work -- we really needed a car during 2021.

I don't need to repeat the craziness that everyone understands -- dates moving around on the app at least once per week. Both of the vehicles we ordered at one point had February or March 2022 dates. The most stressful thing about ordering the car is the fact that no one can actually tell you when the car will arrive. While the MYP always did have dates ahead of the MYLR, they both had dates that moved around every week.

Ultimately I was able to take delivery in Mt Kisco (Connecticut deliveries all go through Mt Kisco NY) right before Thanksgiving. We have a 2022 MYP Red/White.

I was embarrassed when my husband was crawling under the car to check things out at Mt. Kisco. The service advisor seemed a bit amused, but he was probably used to this. Honestly we looked the entire car over based on the lists of defects listed in this forum. We found a couple of "holes" without bolts or clips on the bottom -- but we were not entirely sure that they were supposed to be there in the first place. The paint and the panel fit was better than any other car we've purchased. To be honest, I've never given any car this kind of scrutiny. The service advisor gave us the option of having the car examined in Mt. Kisco or setting up an appointment at the service center in CT. We chose the latter since we still had a two hour drive home and were not that concerned.

There were at least 30 cars being picked up the same day we did in Mt. Kisco. There is absolutely no reason to arrive early as our car was parked in and we needed the person with the appointment before ours to move their new car before we could even drive away. Having said that, since we'd gotten a ride to Mt. Kisco and came from so far away we had arrived a bit early and no one made us wait. We were just parked in after examining the car and it did not get us on the road any earlier.

The weekend we picked up the car we did drop it off to get snow tires put on the vehicle (tsportline). We also made an appointment in Milford CT to have the underside of the car looked at. They installed two clips and the Homelink we had ordered -- they were incredibly efficient. We went next door to eat lunch and they were done before we came back. We also had PPF and ceramic coating applied (Automobilia in West Haven CT). The tires and treatments for the paint were pricey -- but we do intend to keep this car for as long as it will last.

We've taken a couple of longer trips (3 hours) and been able to use superchargers a couple of times -- so happy we chose a Tesla! We've been driving the car about a month now and I love that we don't have the "range anxiety" that we had when we owned an electric car in the past.

The car is amazing. I really think if Tesla would manage the order and wait experience better it would allow people to relax a bit during that process. While I was waiting I kept questioning how much I was spending on a car that I kept seeing had so many quality problems.

As for the MYLR, I did eventually cancel that order and eat the cost of it. In the end, I'm actually happy we bought the MYP anyway. As for drive quality, we only briefly drove with the original tires before swapping for snow tires, which are 19". We'll get more experience with the original tires next summer. Ride quality is fine -- and coming from a BMW X1, we are actually quite happy with it. That is another concern we had while waiting and we went to go test drive both versions in Milford, CT and realized we would be happier with the MYP.

Yesterday we received our CT license plates -- within the 30 days that they were promised to us!

All around we've had a really great experience -- and quite frankly, better than any experience we've had buying a car in the past. 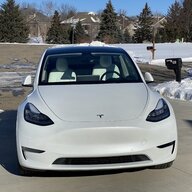 I know those who move from luxury cars to Tesla do have concerns and anxieties about their Tesla. But I am happy you had no quality issues. What size are your winter tires?
•••
K

45thParallel said:
I know those who move from luxury cars to Tesla do have concerns and anxieties about their Tesla. But I am happy you had no quality issues. What size are your winter tires?
Click to expand...

N
Accepted Delivery of MYP 22' this weekend. Your thoughts on the fit and finish?