Just came across this thread... We just recently (end of 2020) got our MX with particularly the idea of using it to tow our trailer. That trailer was also bought with the idea of being towed by a MX. It is a Hymer Touring GT (2600 lbs empty, 3200 loaded). The shape of this trailer (unfortunately not available any more because of the Hymer North America going bust in 2019) is quite aerodynamic (the German original, ERIBA, was designed in the 1950's inspired by glider planes). It also has a "mild" pop-up roof in order to reduce the frontal area. Our first trip two weeks ago gave us energy use of 500 to 600 W/mile for the duo in a mix of freeway and two-lane highways, going 65-70 on the freeway portions. A Canadian company (l"Air Camper: 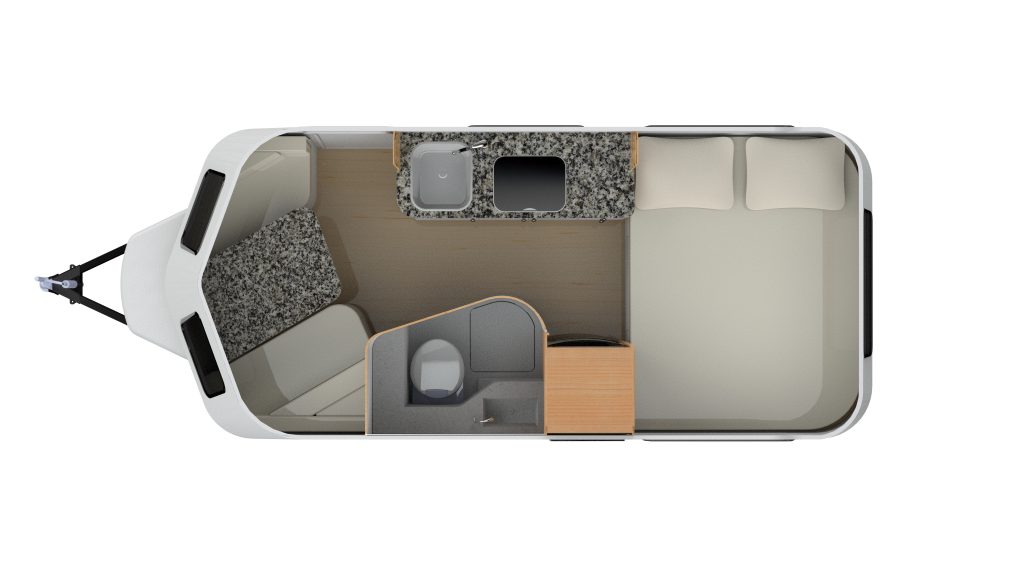 laircamper.com
) appears to be trying to pick up the pieces of the defunct company and improve on details of the features and design, make the trailer a bit lighter and hopefully would dramatically improve the build quality.

So the issue camping in MX isn’t so much having water, but enough hot water on demand. Certainly you could fill the 10 liter dromedary bags and use those while still hot. So one thing I have done is use a Yeti hopper flip 18 to insulate the Dromedary bags for a hot shower up to 24 hours later. I also have a Yet Hopper 20 which can fit quite a bit.

I scuba dive for lobster and often come out of the ocean freezing so having a hot shower at all times is great. I toss a industrial garbage bag into the yeti and stand In it and toss all the scuba boots and gloves lights etc into that water and do a final rinse . I then soak the regulators in another plastic bag in the Yeti. Works pretty good.

I also have a Dometic CFX3 -35 35 liter refrigerator freezer game changer. Great for keeping ice cream of food from spoiling if you have to charge on the way back from the market.

So- it’s virtually Silent. I put a layer of 1.5 liter Fiji water bottles under it. So no condensation issues with the underside of the cooler which can leave a damp spot on a wooden floor if there is zero air flow. With the CFX3-35 you can remove the rear trunk cover and it sits just a little higher than flush.

On longer trips I use an Exped Megamat Duo which is 52“ x 77.75” that almost exactly fits MX if you tuck in the corners over the trunk.
that mattress helps insulate my pair of yeti hopper flip 18 when they are full of lobster and need to stay frozen. But in this case, I put a coated wire spacer grate so the cooler can breathe as it generates heat to cool its interior. That “waste heat” is recaptured by the Dromedary water bags and brings them up to about 99 degrees. I make Sure there is ventilation and the Exped doesn’t cover the entire corner by the 12 volt outlet in the trunk area so that temperature doesn’t exceed 100 degrees. Since it’s within the spec of these coolers to be used in 100 degree heat. The Dromedary bags rest on closed cell foam so they don’t lose heat from conduction.

I was going to have a sail maker make a Custom shower stall that would clip onto the open falcon wing and latch and side mirror for support even in gusty conditions, the Pop up shower stalls for camping are too cumbersome . I made a prototype , the treated nylon material wasn’t ideal As it isn’t flexible enough in extreme cold. In an ideal world it would be a lighter inflatable material like what is used in the Exped Synmat or even their nozzle pump.
•••

JAG said:
designing my own trailer is the PRIMARY focus of this thread.
Click to expand...

So…have you built your custom trailer yet?
•••

P
Are many people here using a model 3 to tow a small travel trailer?