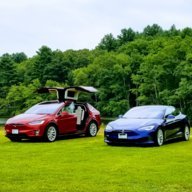 A few months ago, my wife started complaining that once in a while her Model X wasn't switching to her driver profile when she got in the car in the garage. E.g., she's get in the car and the car would go to my profile. She'd have to manually select her own. When she got out of the car, it would go to Easy Entry (she uses it, I don't). Eventually I noticed it too - but it occurred infrequently and we couldn't figure out why.

And just as weird, my Model S wasn't having this problem. It always worked just right.

I began to wonder if somehow the X though both fobs were the same or something, and lots of other random explanations. I tried relinking the fobs to the profiles, removing Easy Entry, etc. Nothing seemed to help. I kept thinking this was some new bug or configuration botch in a recent software release, but I couldn't pinpoint what was the cause.

My wife finally noticed that when this happened, her car would keep defaulting to my profile until the car locked. After that, it would finally default to her profile when she got in the car.

That's when I remembered that we'd turned on "Exclude Home" in When Walk-Away Door Lock when this new setting was released earlier this year. It was a great new feature since they are parked in the garage and it always annoyed my wife that the car was locked in the garage.


We finally spent some time playing with the setting and were able to figure out the cause of the problem:
Basically, the X doesn't select the driver profile based upon which fob caused the door to open.

When you turn on "Exclude Home" for Walk-Away Door Lock, then the X doesn't lock at home. This means which ever fob was in it when it was last driven home is the last fob to unlock it. If you walk up to it with the other fob, the driver's door opens, but once you turn on the car (hit the brake) the car selects the driver profile for the fob that last unlocked it, which is not the fob you have now.

Our unhappy workaround is to turn off "Exclude Home" for the Model X, meaning the car locks in the garage. But now the correct driver profile is always selected.

This seems like a software bug in the X. It should select the profile for the fob that caused the driver's door to open.

Am I missing some other setting that would affect this?
Last edited: Oct 27, 2020
Reactions: pilotSteve, ChadS and Art_Vandelay 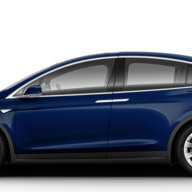 I have a similar issue with my X, but my conclusion was that my wife's purse was in the pantry next to the garage where the X was parked. So every time I get in, it always goes to my wife's profile (even if I was the last one driving it), it would drive me nuts. Until one day, I noticed that the lights in the X were flashing, as in, in was locking and unlocking itself. Which led me to realized that it was her keys in her purse. I hang the keys up near the garage door, but she's like 2 feet closer in the pantry. I moved her purse out of the pantry and another extra 10 feet away. No more flashing lights, and the seats goto my key profile when I get in. But almost every time it does happen, I go check, and she's got her purse sitting in the pantry again, so I attribute this problem to the proximity of my wife's keys to the car. I don't have exclude from home set (hence the locking and unlocking I guess). Don't want to use exclude because I also park the X in the driveway, the front of the house (garage is in the back), etc... We're so used to walking away locking that we will never lock the car when we're home if this was on. I'm already having issues with ICE car, leaving the engine running, leaving doors unlocked, don't need more things to remember when leaving the X. 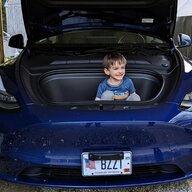 I've had to move the key rack further away, and bought two RFID pouches that I hang on the outer two hooks, while we each use one of the inner two hooks for our keys.

ah, good idea on the RFID. Going to get a pair.

When I did this testing I had the other fobs in Faraday bags. And I first tested the effectiveness of the bag by attempting to get into the car when I had the bag with fob inside next to each car. The Farday bag absolutely prevent the signal from getting out.

I bought these because they were big enough for an X fob as well as only $13 for a pair. https://www.amazon.com/gp/product/B07GDD35GH/

jlv1 said:
When I did this testing I had the other fobs in Faraday bags. And I first tested the effectiveness of the bag by attempting to get into the car when I had the bag with fob inside next to each car. The Farday bag absolutely prevent the signal from getting out.

I bought these because they were big enough for an X fob as well as only $13 for a pair. https://www.amazon.com/gp/product/B07GDD35GH/
Click to expand...

Yep, same ones I got. But I found that with a few walls in between my parking spot and the key rack, I don't have to put the fobs inside to keep the car from waking up.

Thanks. Just ordered a pair.

Just to clarify, having the other fob nearby is not the cause of the problem I describe when I created this post.

As I said, when I tested out this cause of the problem, I had the other fob in the Faraday bag. But I originally bought the bags for situations such as when we travel and the car is parked outside a hotel room or rental house. We had that happen in September.
Reactions: ModelNforNerd

My wife is a big tea drinker. We put her X fobs in a tea tin. You don't have to close the lid; just being inside keeps the car from seeing them.

Thanks, OP, for posting your observations. My wife had been complaining about her X sometimes not knowing it was her when she walked out there and I was afraid she was going to insist I spend time debugging it. Once I gave her your explanation, she seemed happy, so you save me a lot of time.
Reactions: jlv1
L

My new 2020 X is doing what it supposes to do.
My wife's driving most of time to work. Her fob is in her purse all time. The seat moves back (easy entry) when the door opens and moves up when brake pedal is pushed.
Her profile is selected correctly.
When I drive, and she is not close around, my profile is picked up when the car detects my fob.
Our profiles work perfectly as is should 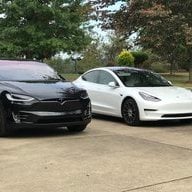 I have about a 95% success rate of the correct driver profile being selected based on the fob. But sometimes, it simply goes to the wrong profile. This happens when I’m on a solo trip, 400 miles from the other fob, and a week since the other fob was used. I have always assumed that it is just one more of those buggy things about the X. BTW I have it set to auto-lock on walk-away with no exclusions.

Model X Yesterday at 10:16 AM
cmarshack

T
Locking with FOB and walk away Model Y