Driving While Tesla, aka, Objects In Mirror Are Armed And Are Uncomfortably Close 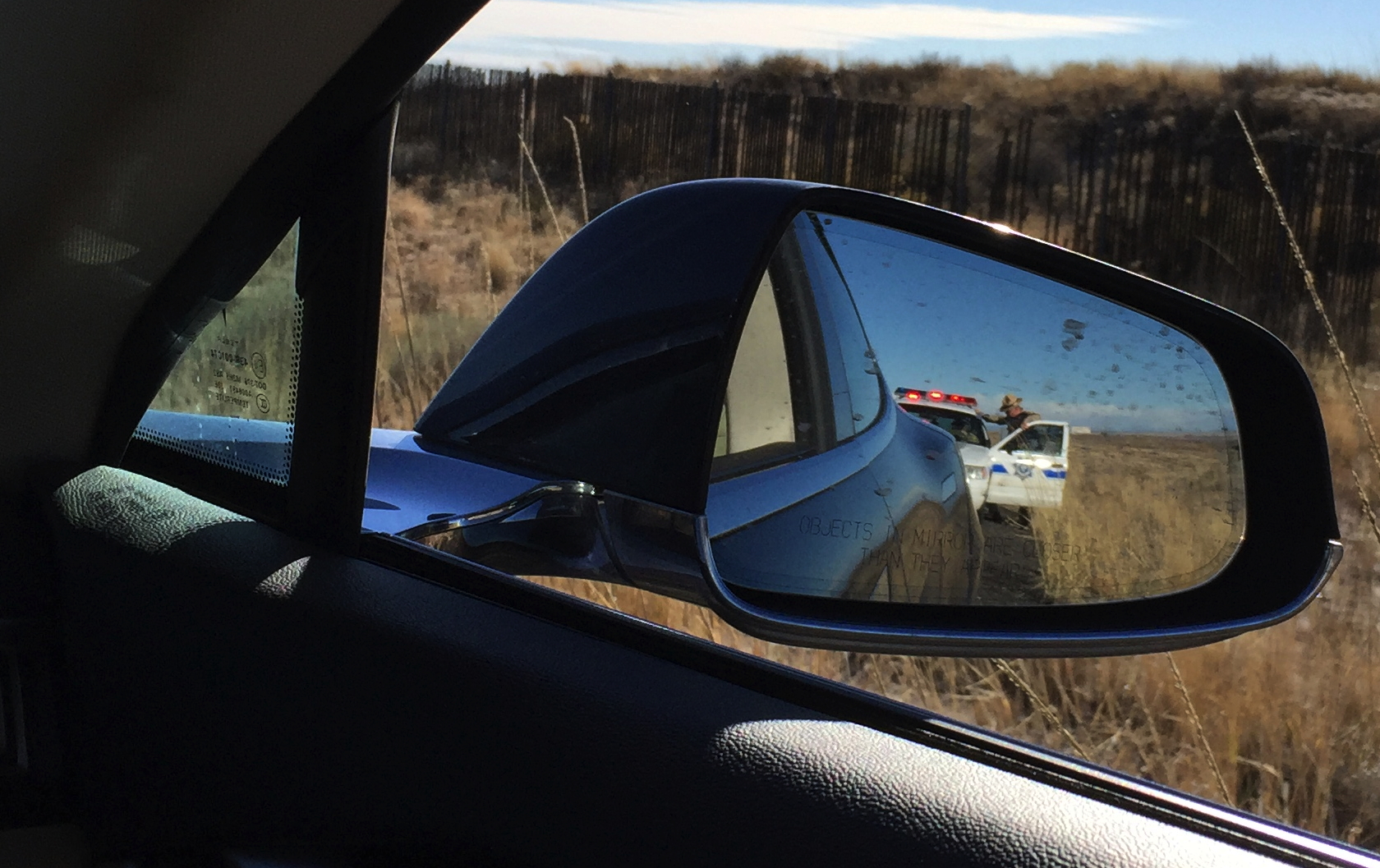 Got pulled over today by a police car just a stone's throw from the Holbrook, AZ supercharger exit on I-40. Whole thing was absurd and a fabrication on cops' part.

Lots of road work in northeastern AZ today, along I-40. Several places where the speed drops to 55, even 45, and one lane is closed while they work on the other. Cops everywhere, their lights flashing, their cruisers parked in the wrong direction, looking right at the oncoming cars. They wanted people to slow down, and people were slowing down.

I'd been driving with some Subaru Outback ahead of me and this 18-wheeler behind me and the three of us were clustered along the freeway for a good 50 miles, dealing with these work areas and none of us finding a need to speed past and get further down the road. I guess they were as tired as I was, and we were all sticking right to the speed limit.

Then, nearing Holbrook, same configuration, me in middle, Outback ahead, truck behind, we encounter another speed trap / single-lane 55mph road work
area. So we all slow down. My speedo said 54 as I turned to look at the cops as I rode by. Cops looked right at me. Heads turned. You could see 'em. As I rolled by, their heads just kept turning, and I could see one cop's mouth moving. No doubt saying, "let's get that guy."

Sure enough, as soon as the 18-wheeler behind me had passed by the cops, they twirl around in a power-slide U-turn, and sit behind the 18 wheeler. We all continue, Outback, me in Tesla, 18-wheeler, and cops, for the next two miles of single-lane freeway, toodlin' along at 54mph in a 55 work zone.

Finally the zone clears, eastbound I-40 becomes two lanes again, and I just sit there, gently upping the speed to 60, 62, 64. I see cop car pull out past truck behind as soon as he could. He zooms up, then slows down and shadows me from left lane for a good 60 seconds. My nav system is telling me get ready to turn onto the exit for the Holbrook supercharger. Suddenly, cop throws his lights on. WTF? Driving while Tesla. 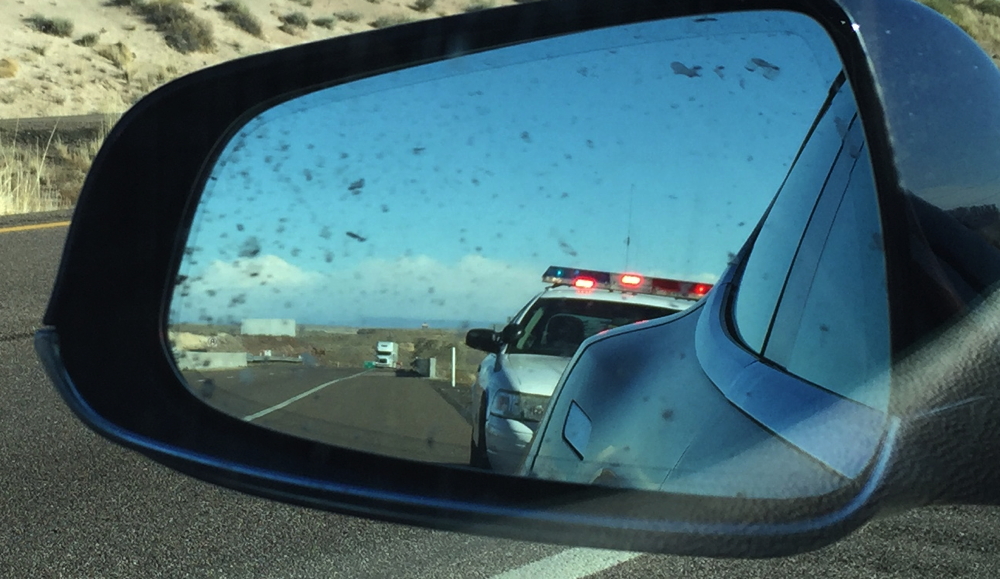 I pull over. He pulls over. Two cops get out. Young cop driver, older fatter cop passenger. Young cop has point. Old cop has hand on gun. Sh**.

Young cop is nervous. "The reason I stopped you back there was in that construction zone you were following that guy" -- the Subaru Outback -- "a little too close." You have to be kidding me, I'm thinking. "I clocked you about two seconds, and two seconds in-between somebody, if that guy had slammed on his brakes or sumpin', he woulda rear-ended ya. And I also got ya back here not using your turn signal."

Yep. Driving while Tesla. Totally fabricated b.s. He asked for my license and registration. Fat older cop is whispering to him, telling him to ask for proof of insurance too. I get it, this young cop is like a trainee. Maybe this is the first time he's pulled someone over.

My right-turn signal is going click, click, click as we both just stop, cops waiting for me to hand over papers, me thinking about how much b.s. this is, and holding back saying another word other than informing the cop how fully prepared I am to come all the way out to Holbrook Arizona again to take this up in court with a judge and jury.

"Home," I said, mentally adding a profanity after but thoughtfully keeping it to myself.

"Home?" he asked. But I was not going to tell him any more without a warrant. "Hang tight sir, I'll be right back."

They trundled back to their cop car and the young cop got in the passenger seat while old cop stood outside. Young cop was clearly fiddling with a computer keyboard and screen, and old cop kept leaning in pointing things out and explaining. Trainee. Newbie. I "hung tight" for another nine minutes (I timed it, logged everything that happened) and finally they came back. With more papers than I had given them.

"Alright sir, I just wrote you a warning," handing me a computer printout with all my info on it and two bogus accusations, "following too close" and the "failure to use turn signal." (How -- no, why --- would I use a turn signal in a road construction area that's one-lane only? It made no sense. And my right turn signal was STILL ON AFTER TWELVE MINUTES of being pulled over. He could hear it and see it as well as I. It was the only turn I made. To pull over for him. So absurd.)

I was surprised he gave me a warning. I thought for sure I was looking at some humongous dollar amount fine and an order to appear in court or pay the fine, yadda yadda. I guess the old cop realized their charges weren't going to stand. I would have absolutely made it my MISSION in life to come back to Holbrook to fight the case.

I thanked him and got the hell out of there, took the exit around the next curve, and cooled off at the supercharger in the Burger King parking lot.

My first case of driving while Tesla. Hope it's my last.

While I was charging up the car at the Burger King Supercharger, I pulled out the computer printout the young cop had given me.

Full of errors. Wrong car color (BLACK). Completely wrong date on expiration of car registration. Several other similar types of errors. Not typos, but like just sloppy, nervous, careless work. I figured I could've used all of that in a court of law.
Last edited: Nov 10, 2015
•••

I'm not defending the cops for what they did, the story does indeed sound like they maybe had some combination of training and picking out a high-profile vehicle to practice on. However, I think I have a reason why they were there.

I drove that stretch of I-40 on Sunday 11/8, and in between the Holbrook supercharger and the Flagstaff supercharger are a few more of those 1-lane construction zones. I was west bound and came up on one, and on the other side there was an overturned 18-wheeler, had gotten into an accident with another vehicle, the overturned trailer was blocking all lanes and shoulders of the east bound side of I-40, traffic backed up for about 5 miles, not moving at all.

I have a feeling the cops may have been out patrolling these 1-lane sections so that the chatter spreads that everyone should slow down there to avoid getting ticketed.

Doesn't excuse what they did though -- it sounds like you did absolutely nothing wrong to warrant the pull-over.

Hmm. I was westbound on I-40 in that area last Thurs, when it was snowing, and they'd closed I-40 for about 5 miles (requiring everybody to use a bumper-to-bumper 5mph inching-along frontage road) for this: 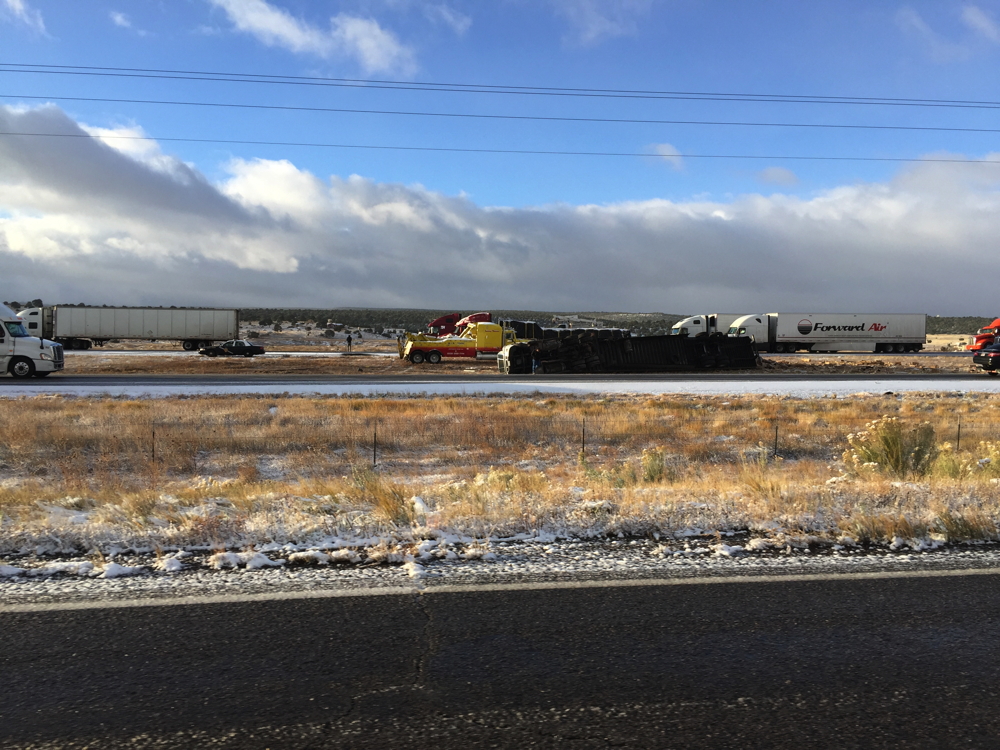 J
Got pulled over yesterday, interesting?